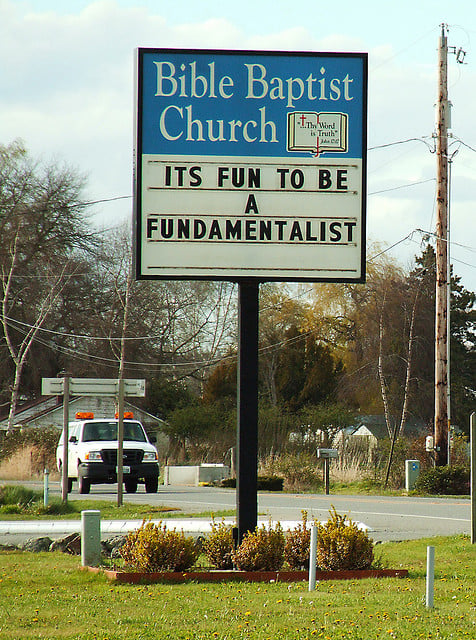 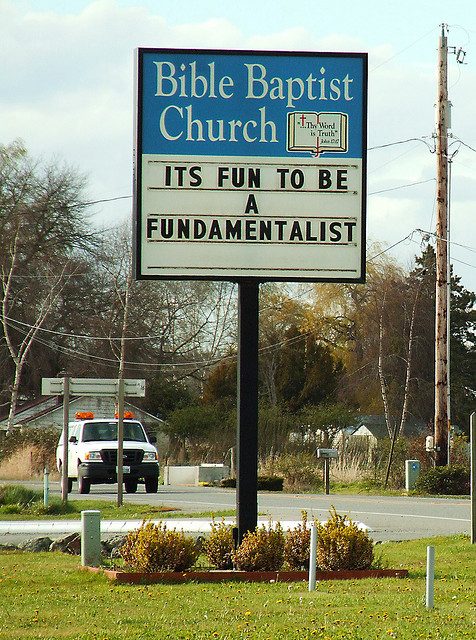 Fun to be a fundamentalist! | Photo by Curtis Perry via Flickr (http://bit.ly/1M5CrQJ)

When we last left off, we had gone through several of the best (worst?) evangelical clichés. But because once is never enough, and because the list is seemingly endless, we're back for part 2. These are words and phrases--like "love on" or "doing life together"--that evangelicals use often as shorthand for something really good or important, but they sound terribly strange to outsiders. So, without further ado, I present to you part two of our installment on evangelical lingo.

"Just"
Definition: A placeholder for "um" or "uh" in prayer.
Example: "Dear Father God, we just pray that you would just bless this endeavor, that you would just be near to us in Spirit and just pour out your presence on us."
What's weird: WHY this word? I don't know; I'm genuinely curious about what's behind this evangelicalism. It may be that it makes the pray-er seem more earnest or makes God more approachable. But at almost any evangelical church you'll hear a prayer enjoining God to "just" do it.

"God-shaped hole"
Definition: The innate longing all people, whether Christian or not, have for God and that cannot be filled this side of heaven. The phrase is probably the aggregated and catchy-sounding response to statements by Augustine and Blaise Pascal, who said "there was once in man a true happiness, of which all that now remains is the empty print and trace."
Example: "There's a God-shaped hole in all of us / And the restless soul is searching" --song lyrics from the band Plumb
What's weird: I mean, what's not? A God-shaped hole? What is the shape of God? Is it anything like the shape of my heart? Why can't we just say we have a longing for God, and why do we have to make God into a missing puzzle piece? Why are there so many pop references in in this one paragraph? God-shaped holes work in mysterious ways.

Raw/messy/vulnerable/real
Definition: Something a female Christian blogger wrote that admitted she had dirty dishes in her sink.
Example: "You guys, I've tried to make everything look perfect in the past, but can I just be real with you? The dishes are piling up in the sink, the two-year-old's nose won't stop running, and I didn't even get my quiet time in this morning. I'm just really living into the raw, beautiful mess."
What's weird: The whole phenomenon of expressing your life as it is as something "vulnerable" is my personal bugaboo. It is a very small deal in the grand scheme of things, and some people may love it, but! LITERALLY EVERYONE has dirty dishes in their sink at some point. Everyone's kids' noses run. (That was a terrible sentence, sorry.) You can't talk about real, normal, morally neutral things and act like that's vulnerability or laudably "raw." "Raw," in my humble opinion, should be reserved for talking about vegetables or cocaine, not a faux-confessional picture of a beautiful kitchen with a few leftover boxes on the counter.

"Humbled"
Definition: So honored/excited/proud but I'm afraid that saying "I'm proud" will make other people think I'm prideful or greedy.
Example: "I am just so humbled to announce that God has brought thousands of new people to our church this year. #OnlyGod."
What's Weird: This is another example of evangelicals being uncomfortable enough with their emotions/concerned enough with perception that they turn something totally normal ("I am excited about this thing and proud of my role into it!") into a spiritual-looking statement. This may well be the precursor to the humblebrag, as it has been going on for decades and is essentially the same thing. Some folk do genuinely feel humbled by their accomplishments, which is the result of years of spiritual work, but who posts to social media out of humility?

Related Posts
By Alejandra Molina
John MacArthur believes the Bible trumps COVID-19 public health orders. Legal scholars say no
By Bob Smietana, Alejandra Molina
Death of megachurch pastor Darrin Patrick officially ruled a suicide
By Alejandra Molina
‘Your fight is my fight’: Latino clergy and faith leaders rally behind Black Lives Matter
By Alejandra Molina
Four young people of different faiths move into a home together, then a pandemic happens
By Jeffrey Salkin
Warning: Your piety might be dangerous to your health