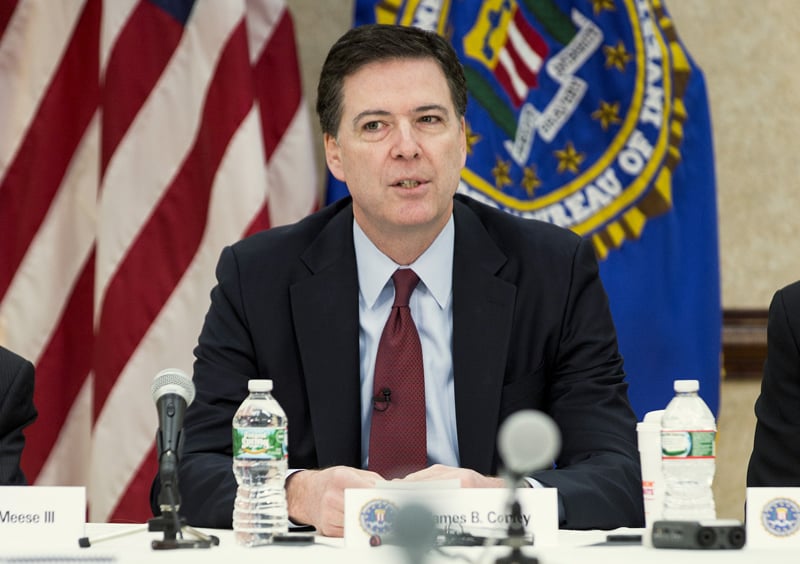 FBI Director James B. Comey speaks during a news conference on the release of the 9/11 Review Commission report in Washington on March 25, 2015. Photo courtesy of REUTERS/Joshua Roberts *Editors: This photo may only be used with RNS-SALKIN-COLUMN, originally transmitted on April 23, 2015.
April 23, 2015
Jeffrey Salkin

FBI Director James B. Comey speaks during a news conference on the release of the 9/11 Review Commission report in Washington on March 25, 2015. Photo courtesy of REUTERS/Joshua Roberts
*Editors: This photo may only be used with RNS-SALKIN-COLUMN, originally transmitted on April 23, 2015.

(RNS) The director of the FBI stepped in it.

Last week, James B. Comey delivered a speech at the U.S. Holocaust Memorial Museum in which he said the murderers and accomplices of Germany, Poland and Hungary “convinced themselves it was the right thing to do, the thing they had to do. That’s what people do. And that should truly frighten us.”

The Polish government was not happy. President Bronislaw Komorowski castigated Comey for his “ignorance, lack of historical knowledge and possibly large personal aversion” toward Poles. And, as a gesture of goodwill, Comey has apologized.

Let’s be clear here. Comey was not accusing the nation of Poland of being complicit in the Holocaust. For all intents and purposes Poland as a nation temporarily ceased to exist during World War II.

But Poles, Hungarians, Germans, Lithuanians, Ukrainians, Croats, Estonians, Dutch, Latvians -- who can deny that so many of them were willing conspirators with the Nazis in the roundup of Jews and the wholesale destruction of European Jewish life?

Here is how  Komorowski could have responded:

“Poland suffered terribly during World War II. We were invaded by both the Soviet Union and Germany. The Nazis intended to turn our people into a permanent underclass of slaves. If you have read William Styron’s book 'Sophie’s Choice,' or if you have seen the movie, then you know that the Nazis kidnapped Polish children and raised them as their own. Auschwitz was a killing field for the Poles, no less than for the Jews.

“Let me go further. In the early Middle Ages, Polish kings welcomed Jews who were fleeing the Crusades. The Jews settled there and created a Polish middle class, as well as a powerful religious culture.

“And, let us not forget: During the war, many Polish citizens saved Jews. According to Yad VaShem, Israel's official memorial to the victims of the Holocaust, 6,532 Poles were righteous gentiles. This is not only more than any other country; it accounts for no less than 26 percent of the total number of 24,811 people who Yad VaShem has recognized for their moral heroism. 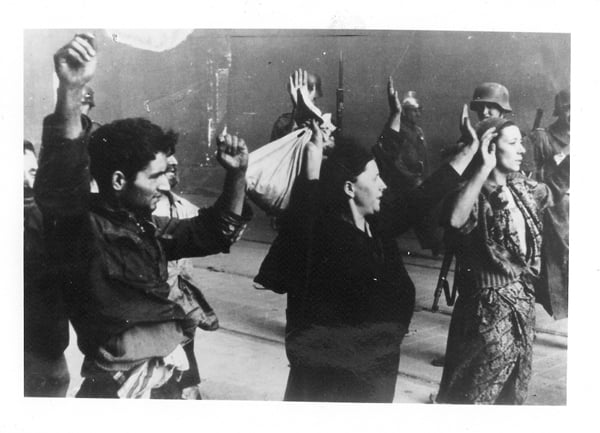 A group of Jews is taken prisoner during the Warsaw Ghetto uprising of April 1943. Religion News Service File Photo.

“But, this moment also demands our honesty. Yes, in our best historical moments, we welcomed Jews, and we saved Jews. As Jews would say, that has been our ‘good inclination.’

“But, our ‘evil inclination’ has also been present. Anti-Semitism is deeply imbedded in our history. Some of that hatred was based in religion; some of it in Polish nationalism; often, a combination of the two.

“And, if we are to remember Polish righteous, then we must remember those of our people who were far from righteous. In August 1945, there were pogroms against Jewish survivors in Krakow. In July 1946, there was the infamous pogrom in Kielce. Within two years of the end of the war, our citizens murdered at least 1,500 Jews.

“The blood of the Jewish people stained the soil of Poland, and that blood continues to scream at us. In 2012, the Anti-Defamation League carried out a survey of Polish attitudes toward the Jews. I am ashamed to report, 54 percent of Poles believe 'Jews have too much power in the business world.' Many Poles believe that there is a Jewish conspiracy to control international banking and the media.

"And many Poles still harbor traditional, Christian anti-Semitic stereotypes about the Jews, including some of the vilest stereotypes imaginable.

“So, yes -- I was personally troubled by what Comey said about how Poles collaborated with the Nazis during the Holocaust. I was troubled because he was neither entirely right, nor was he entirely wrong.

“But, in another sense, we Poles should welcome Comey’s remarks, because they offer us the opportunity for sober reflection, and even repentance.

“To repent of our dark history means we can write a new story. That is precisely what is happening now. Jewish life in Poland is growing again -- much of it, under the auspices of the World Union for Progressive Judaism.

"Consider the Museum of the History of Polish Jews in Warsaw. It is perhaps Poland’s greatest cultural achievement since the fall of communism.

“Not far from the smokestacks of Auschwitz, there is now a Jewish Community Center -- a place of vibrant Jewish life, in the shadow of what had been Jewish death.

“Your words made us uncomfortable. May our discomfort be the gateway to repentance and renewal.”

(Rabbi Jeffrey K. Salkin is the spiritual leader of Temple Beth Am of Bayonne, N.J., and the author of numerous books on Jewish spirituality and ethics, published by Jewish Lights Publishing and Jewish Publication Society.)