Ikeita Cantu, left, and Carmen Guzman, of McLean, Va., hold signs in front of the Supreme Court on April 28, 2015, as justices inside considered arguments about legalizing same-sex marriage nationwide. They were married in 2009 in Canada. Religion News Service photo by Adelle M. Banks

WASHINGTON (RNS) As the nine Supreme Court justices took up the vexing question of a constitutional right to same-sex marriage on Tuesday (April 28), the case came down to two competing visions of marriage: what it’s been, what it should be, and who gets to decide.

Outside the court, hundreds of demonstrators echoed both sides: Amateur evangelists and anti-gay zealots with signs proclaiming, “Man & Woman: United for Life, Open to Life,” and throngs of gay rights supporters chanting “Love Must Win!” to drown out the sidewalk preachers with their megaphones.

Yet ultimately, beyond both the arcane and real-life arguments over the state’s sanction of private relationships, the court must decide the very nature and purpose of marriage — or at least which nature will be reflected in civil law.

Even Justice Anthony Kennedy — the swing vote and the author of the court’s major gay rights decisions for the past 20 years — struggled to understand how the Supreme Court in 2015 could alter the definition of marriage.

“This definition has been with us for millennia,” he said. “And it — it’s very difficult for the court to say, ‘Oh, well, we — we know better.'”

In that vein, the court’s conservative wing pressed lawyers for gay and lesbian couples in Ohio, Kentucky, Tennessee and Michigan about the nature of the institution they were fighting so hard to access. The questions boiled down to this: Is marriage about a civil contract between two adults, or a societal covenant for the rearing of children?

Michigan’s Special Assistant Attorney General John Bursch, arguing to keep his state’s ban on gay marriage intact, repeatedly stressed  that marriage is about securing bonds between parents and their biological (or adopted) children. When you decouple the two, he argued, more people will start having children outside of wedlock.

“There’s harm if you change the definition of marriage because, in people’s minds, if marriage and creating children don’t have anything to do with each other, then what do you expect? You expect more children outside of marriage,” he said. 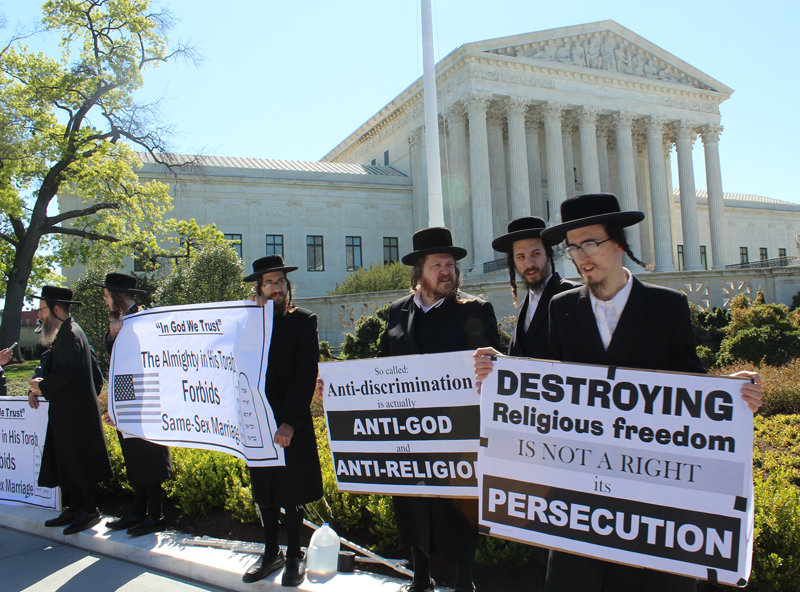 A group of Orthodox Jews protests against same-sex marriage outside the Supreme Court on April 28, 2015, as justices considered whether to legalize same-sex marriage nationwide. Religion News Service photo by Adelle M. Banks

“Do you think that that’s what it would do, Mr. Bursch, that if one allowed same­-sex marriage, one would be announcing to the world that marriage and children have nothing to do with each other?” she asked, saying she found his warnings unrealistic, either in the “abstract or the concrete.”

Justice Ruth Bader Ginsburg, also needling proponents of maintaining the existing bans in 13 states, played down the link between procreation and marriage, noting that elderly couples, infertile couples and even some prisoners could get state blessing on their marriages.

“Suppose a couple, a 70-year-old couple, comes in and they want to get married,” said Ginsburg, an 82-year-old widow. “You don’t have to ask them any questions. You know they are not going to have any children.”

Ginsburg also noted that society’s understanding of marriage itself has evolved, now shunning the notion of “a dominant male (married) to a subordinate female.”

The court’s most outspoken conservative members — Justices Antonin Scalia and Samuel Alito — wondered early and often what would prevent an even further redefinition of marriage to include multiple spouses, or even child brides. “Would there be any ground for denying them a license?” Alito wanted to know.

On the other side, proponents of same-sex couples argued that if the court really cares about the well-being of children, it must not overlook the estimated 210,000 children being raised by same-sex parents without “the stabilizing structure and the many benefits of marriage.”

For them, marriage is a solemn covenant of commitment between two consenting adults. Arguments about children and parentage, they said, are important, but also a sideshow to more fundamental questions about human dignity and civil rights.

“The right to be married is as basic a liberty, as basic a fundamental liberty … which has existed for all of human civilization,” Justice Stephen Breyer said, expressing dismay at the idea that the government would “offer that to almost everyone, but exclude a group.” 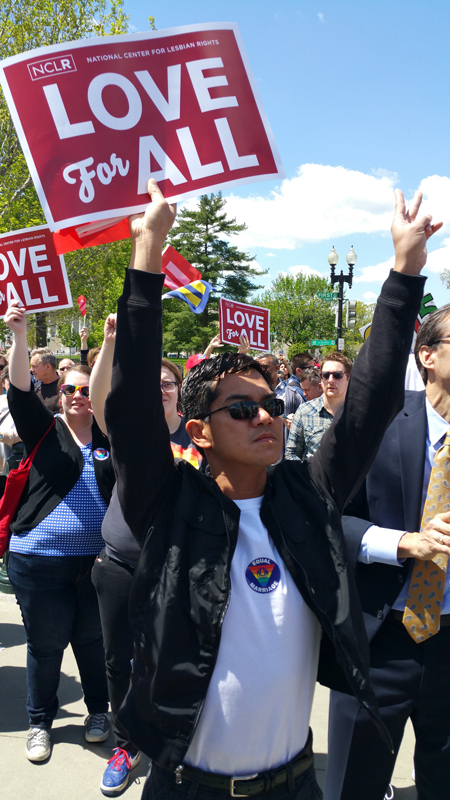 A demonstrator holds up a sign reading “Love For All” outside of the Supreme Court on Tuesday, April 28, 2015, while justices hear arguments about same-sex marriage. Religion News Service photo by Kevin Eckstrom

Kennedy, again clearly grappling with a decision that could define his tenure on the bench, wrestled with the idea of withholding the “dignity-bestowing” access to marriage, echoing his earlier decisions that same-sex couples want nothing more than the “same ennoblement” as everyone else.

Sensing a potentially fatal blow — and the possible loss of Kennedy’s swing vote — Bursch emphasized that his view of marriage was about protecting children, not enhancing or harming any adult’s dignity.

“Dignity may have grown up around marriage as a cultural thing,” he said, “but the state has no interest in bestowing or taking away dignity from anyone, and certainly it’s not the state’s intent to take dignity away from same-sex couples, or from anyone based on their sexual orientation.”

Arguing on behalf of the Obama administration, Solicitor General Donald Verrilli framed the case — and the very nature of marriage — in the broadest possible terms.

“What I would suggest is that in a world in which gay and lesbian couples live openly as our neighbors, they raise their children side by side with the rest of us, they contribute fully as members of the community, that it is simply untenable — untenable — to suggest that they can be denied the right of equal participation in an institution of marriage, or that they can be required to wait until the majority decides that it is ready to treat gay and lesbian people as equals,” he said.

“Gay and lesbian people are equal,” said Verrilli. “They deserve equal protection of the laws, and they deserve it now.”

The court is expected to issue its decision by the end of June.