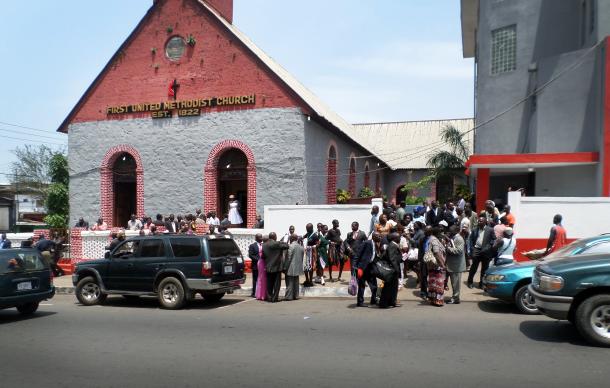 (RNS) In the United States, United Methodists are fighting about whether to allow clergy to marry gay couples. In Liberia, divorce is on the line.

The United Methodist Church in Liberia recently voted to uphold a long-standing provision barring divorced clergy from running for the office of the bishop.

The church’s leaders say the ban brings moral credibility to the office and guides the conduct of those who want to be bishop.

“The entire conference believes this is the right thing to do,” said the Rev. Isaac Chuckpue-Padmore, conference secretary. “Being able to keep a marriage, no matter what, is a high moral standard a candidate for episcopacy must meet.”

But the ban is not part of the Book of Discipline, the rulebook that defines how United Methodists govern themselves. And it is meeting resistance from some church members.

“We demand free, fair and transparent process,” read a placard displayed by one of the protesters during last month’s annual conference meeting in Gardnersville, a north central suburb of Monrovia City.

Some church members protested the ban, disrupting an afternoon session.

Earlier in the conference, lay delegates voted to lift the ban.

But Chuckpue-Padmore said laypeople do not set standards.

“It is the responsibility of the ordained clergy who call the church to these ideals,” he said. “Moreover, laypeople do not put candidates for nomination to the episcopacy.”

Although the protests appear to signal a rift between the church's clergy and some of the lay leaders over the issue, Chuckpue-Padmore said the latest decision would impact the church in a positive way.

“God’s plan is for lifelong, faithful marriage,” he said. “The church must be on the forefront of premarital, marital and postmarital counseling in order to create and preserve strong marriages.”

Black immigrants from America planted the 150,000-member church in Liberia in 1922.