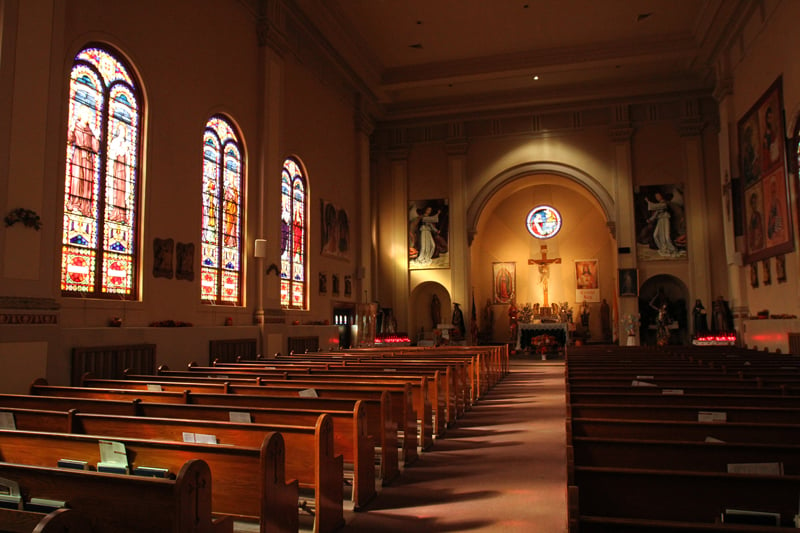 WASHINGTON (RNS) The United States is a significantly less Christian country than it was seven years ago.

That’s the top finding — one that will ricochet through American faith, culture and politics — in the Pew Research Center’s newest report, “America’s Changing Religious Landscape,” released Tuesday (May 12).

Atheists and agnostics have nearly doubled their share of the religious marketplace, and overall indifference to religion of any sort is rising as well. Among the larger Christian bodies, only the historically black Protestant churches have held a steady grip through the years of change. 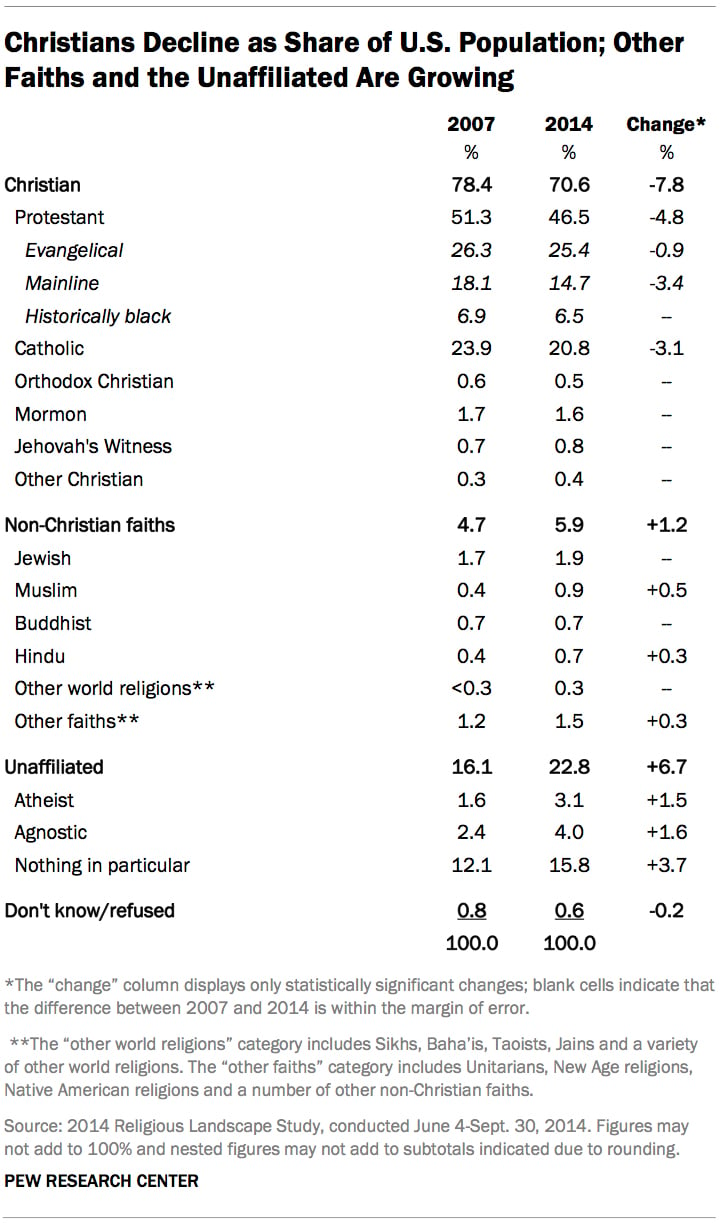 Christians decline as a share of the U.S. population; other faiths and the unaffiliated are growing. Photo courtesy of Pew Research Center

Remember the familiar map of American religion? The South: a bastion of white evangelicals. The Northeast: cradle of Catholics. The Midwest: nest of mainline Protestants. The West: incubator of “nones” — people who claim no religious brand label.

Well, scratch all that in the new topography.

The shrinking numbers of Christians and their loss of market share is the most significant change between 2007 (when Pew did its first U.S. Religious Landscape survey) and the new, equally massive survey of 35,000 U.S. adults.

The percentage of people who describe themselves as Christians fell about 8 points — from 78.4 to 70.6. This includes people in virtually all demographic groups, whether they are “nearing retirement or just entering adulthood, married or single, living in the West or the Bible Belt,” according to the survey report.

Christian faiths are troubled by generational change — each successive group is less connected than that group’s parents — and by “switching” at all ages, the report shows. While nearly 86 percent of Americans say they grew up as Christians, nearly one in five (19 percent) say they aren’t so anymore.

“Overall, there are more than four former Christians for every convert to Christianity,” said Cooperman.

Although evangelicals are part of the decline, their slide has been less steep. They benefit from more people joining evangelical traditions, but they’re hurt by generational change and by America’s increased diversity.

According to the survey, white “born-again or evangelical” Protestants — closely watched for their political clout within the GOP — now account for 19 percent of American adults, down slightly from 21 percent in 2007.

Politicians should take note, said Mike Hout, a sociologist and demographer at New York University who is also a co-director of the General Social Survey, a biennial national demographic survey.

“Traditionally, we thought religion was the mover and politics were the consequence,” he said. Today, it’s the opposite.

Many of today’s formerly faithful left conservative evangelical or Catholic denominations because “they saw them align with a conservative political agenda and they don’t want to be identified with that,” Hout said. 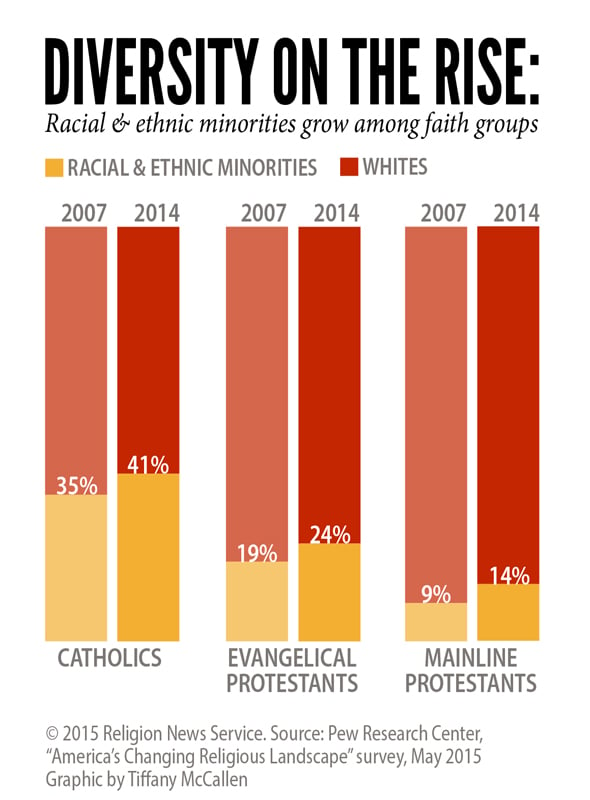 Catholics dropped both in market share and in real numbers. Despite their high retention rate for people reared in the faith, they have a low conversion rate. Today, Cooperman said, 13 percent of U.S. adults are former Catholics, up from 10 percent in 2007.

Generational shifts are also hurting Catholic numbers. Greg Smith, Pew’s associate director of research, said “just 16 percent of the 18-to-24-year-olds today are Catholic, and that is not enough to offset the numbers lost to the aging and switching.”

Where are they going? To religious nowhere.

The nones — Americans who are unaffiliated with brand-name religion — are the new major force in American faith. And they are more secular in outlook — and “more comfortable admitting it” than ever before, said John Green, director of the Bliss Institute of Applied Politics at the University of Akron.

Their growth spans the generations, as well as racial and ethnic groups, said Green, a senior fellow in religion and American politics for the Pew Research Center. 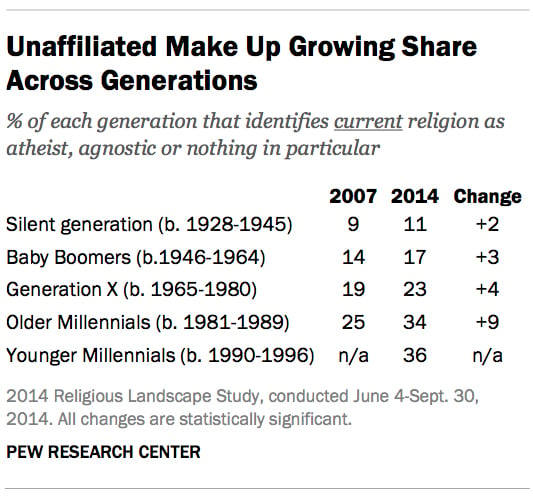 “It’s because we’re right,” crowed David Silverman, president of American Atheists. He hadn’t yet seen the Pew findings but commented based on other surveys he said showed nones’ rising numbers. Indeed, it’s the public attention given to nones in the last decade, combined with the wide-open access to  anti-religious discussion on the Internet, that drives the change, Silverman said.

“More people know the facts, and more people realize they are not alone,” Silverman said. And with these shifts, the stigma of coming out as an atheist is lessening.

“It’s now impossible for an atheist to think he is alone in this world. They are automatically empowered,” said Silverman.

But among the “nothings, ” there’s a distinct split between “spiritual” and totally indifferent nones.

Thirty percent of all nones still showed “a sort of religious pulse” by saying that religion is still at least somewhat important to them, said Cooperman.

However, the bulk of this group (39 percent) are not agnostic, atheist or vaguely spiritual — they’re just not interested. Religion is not even somewhat important to them.

That same level of disinterest cuts into their social and political clout, said Hout.

The nothing-in-particular folks “don’t vote, don’t marry and don’t have kids,” at the same rate as other Americans, said Hout. “They are allergic to large, organized institutions — mass media, religions, big corporations and political parties.” 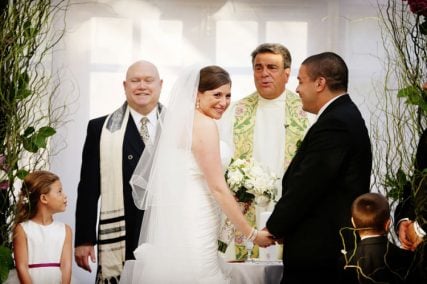 Rachel and Rich Mejias wed in Paterson, N.J., with a priest and rabbi as officiants. Since 2010, nearly four in 10 Americans say they’re in religiously mixed marriages.

“None” is the winning category for religious switchers across society, particularly among gays and lesbians — 41 percent of gay or lesbian Americans say they have no religion, Cooperman said. “This suggests the degree of alienation and discomfort and sense of being unwelcome that they may have felt in traditional religious groups.”

Other trends of note: The latest survey was conducted among a nationally representative sample of 35,071 adults interviewed by telephone, on both cellphones and landlines, from June 4-Sept. 30, 2014. The margin of error on overall findings is plus or minus 0.6 percentage points.