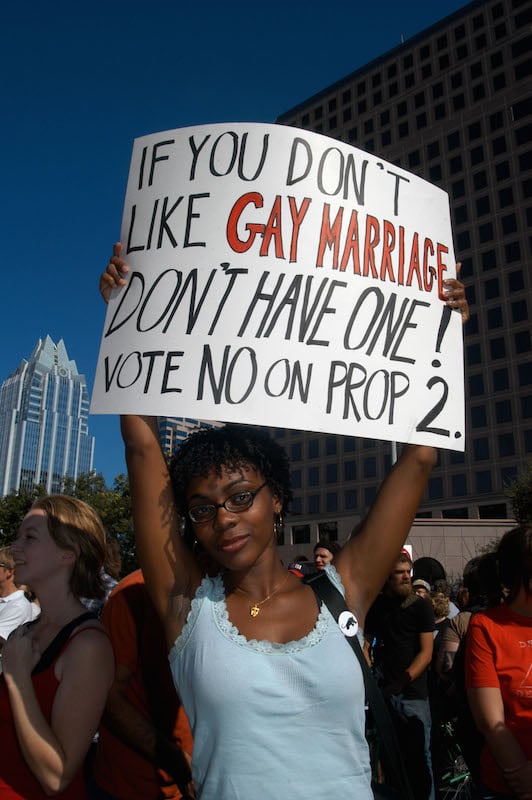 A protester holds up a placard during a rally on the steps of City Hall in Austin in 2005 to oppose a state constitutional ban on same-sex marriage, which ultimately passed. The Supreme Court could overrule that amendment in its closely watched ruling on gay marriage. Photo by Peter A. Silva/Reuters.
*Eds: This photo can only be used with RNS-TEXAS-GAYMARRY, transmitted May 12, 2015.

AUSTIN — The U.S. Supreme Court is now weighing arguments in the same-sex marriage case it heard on April 28 that could lead to a landmark decision requiring all states to acknowledge the unions.

But don’t count Texas out without a fight.

State lawmakers are considering at least five bills designed to block same-sex marriages, which are currently illegal in the state, and some state leaders say they’ll battle to bar the unions regardless of any Supreme Court decision.

Texas Gov. Greg Abbott released a statement reaffirming his opposition to same-sex marriage. He said, “Texans — not unelected federal judges — should decide this important issue for their state.”

“The leap to assume that Texas moves with (a Supreme Court ruling) is just that — a leap,” said state Rep. Cecil Bell, a Republican from suburban Houston who is an author of four of the five bills. “History is replete with cases where Supreme Court precedent isn’t immediately embraced and in some cases isn’t ever embraced.”

Texas joins a handful of states, including Alabama, Michigan and Louisiana, that are considering legislation that would throw up roadblocks to gay marriage in apparent anticipation of the Supreme Court ruling. Indiana and Arkansas recently backed down on similar bills.

In Louisiana, lawmakers are studying the “Marriage and Conscience Act,” which, if passed, would allow employers to deny same-sex spouses marriage benefits and give state contractors the right to refuse to hire gays and lesbians who marry.

“As the fight for religious liberty moves to Louisiana, I have a clear message for any corporation that contemplates bullying our state: Save your breath,” Louisiana Gov. Bobby Jindal, a Republican, wrote in The New York Times.

In 2005, Texas voters passed a referendum banning same-sex marriages. A federal judge last year ruled the ban unconstitutional but issued a stay on his ruling as the issue moved through higher courts.

The fact that the Supreme Court is considering cases from Ohio, Tennessee, Michigan and Kentucky but not Texas should preclude state officials here from automatically following any decision from the highest court, said Jonathan Saenz, president of Texas Values, which opposes same-sex marriages.

“If you’re a government actor or official in the state of Texas, you should exercise extreme caution before making a decision based on a U.S. Supreme Court decision,” Saenz said. “States have the right to defend their laws.”

Public opinion in Texas has been slowly shifting toward support of gay marriages, said Daniel Williams of Equality Texas, an advocacy group that backs the unions. He pointed to several polls in recent years that show Texas gaining ground on supporting same-sex marriage, though those backers are still in the minority.

A University of Texas/Texas Tribune Poll conducted in October found 42 percent of Texans in favor of same-sex couples being allowed to marry; 47 percent were opposed and 11 percent unsure.

“Texans, like the rest of the nation, have evolved on the issue of marriage,” Williams said. “It’s really based on increased visibility and increased relationships. It’s a lot harder to deny the right to someone you know.”

Meg Penrose, a law professor at Texas A&M University who has followed the issue closely, said she has noticed the shift in her classroom. Fifteen years ago, her students were overwhelmingly opposed to same-sex marriage, she said. Today, they’re more evenly split.

Despite the popular sentiment, Texas will have to abide by a Supreme Court ruling if the justices declare same-sex marrying a constitutional right, Penrose said. “That’s a huge if,” she said.

Bell, the state lawmaker, is not so sure. The people’s will, proved through the 2005 referendum, outweighs any decisions by a federal court, he said. One of his bills would bar public funding to license or recognize the marriages of gay and lesbian couples, regardless of any Supreme Court ruling. As of late Monday (May 11), the bill appeared to have a majority of support in the state House.

“The sovereignty of states is not something to be taken lightly,” Bell said. “It’s something intended by the framers of our Constitution.”