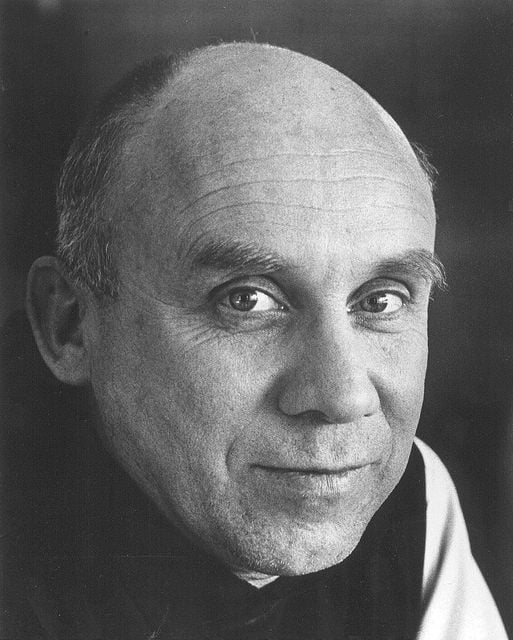 LOUISVILLE, Ky. (RNS) If the influential Catholic writer Thomas Merton were alive today, he would likely have strong words about police brutality and racial profiling.

Back in 1963, Merton called the civil rights movement “the most providential hour, the kairos not merely of the Negro, but of the white man.”

His words echoed Saturday (May 16) among black pastors at a conference, titled Sacred Journeys and the Legacy of Thomas Merton, hosted by Louisville’s Center for Interfaith Relations. The event marked the 100th anniversary of Merton’s birth.

“This is our moment,” said the Rev. Neichelle Guidry Jones, associate pastor to young adults at Trinity United Church of Christ in Chicago, President Obama’s old congregation. “We need to get into what the spirit is doing to this community and what racialized fear can call us to do.” Merton’s words are relevant in the wake of protests in Ferguson, New York and Baltimore, panelists said. But people of faith must do more than weep about the deaths of Michael Brown, Eric Garner and Freddie Gray, black men killed by police, the speakers suggested.

The lively session elicited applause from the audience of about 300 people, nearly all of them white.

“Christianity has robbed the Jesus movement of its revolutionary reality,” said the Rev. Willie D. Francois III, a pastor at First Corinthian Baptist Church in New York’s Harlem neighborhood. “Jesus was about building people, not institutions.” 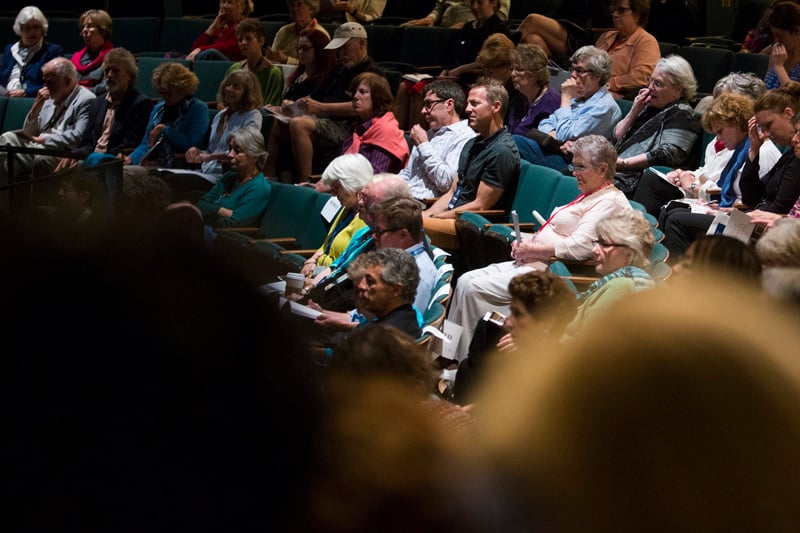 People gather to watch the Rev. Michael Czerny at the Festival of Faiths “Sacred Journeys and the Legacy of Thomas Merton.” Religion News Service photo by Philip Scott Andrews

Merton, a Trappist monk, lived for 27 years at the Abbey of Gethsemani, about 50 miles from Louisville. His 1948 memoir, “The Seven Storey Mountain,” describes his conversion to Roman Catholicism at age 23 and his decision to enter the monastery. It’s also the story of his personal search for God.

His 70 books included journals, poetry and commentary on peace and justice. He died Dec. 10, 1968, in an accidental electrocution while attending an interfaith conference in Bangkok.

“He was an interfaith pioneer who looked deeply into other faiths to inform his own,” said Sarah Reed Harris, managing director of Louisville’s Center for Interfaith Relations.  Merton inspired the conference, she said, which began 20 years ago as a celebration of the community’s religious traditions.

While he’s widely admired for his autobiographical writing about contemplative prayer and meditation, Merton’s work on racial justice is less well-known, said Christopher Pramuk, who teaches theology and spirituality at Xavier University in Cincinnati and is the author of “Hope Sings, So Beautiful: Graced Encounters Across the Color Line.”

“Merton was one of the first white public intellectuals to extend a hand to blacks,” Pramuk said. “He asked, “How do we treat this other Christ, this person who happens to be black?” A turning point for Merton occurred a few blocks from the conference site. A historic marker notes where Merton stood March 18, 1958, when he experienced a spiritual revelation that “led him to redefine his monastic identity with greater involvement in social justice issues,” the sign says.

Of that moment, Merton wrote, “I was suddenly overwhelmed with the realization that I loved all those people, that they were mine and I theirs, that we could not be alien to one another even though we were total strangers. … There is no way of telling people that they are all walking around shining like the sun.”

Merton “was willing to be compassionately transparent,” said Jonathan Montaldo, an editor of Merton’s writings and a former director of the Thomas Merton Center at Bellarmine University in Louisville.

“People identify with him because they see in him a mirror of themselves,” he said. “They see their own journey. For Merton, the real journey in life is internal.”

Although Merton traditionally appealed to Roman Catholics, “now he’s a writer the unchurched find consoling to help them find meaning in their lives,” Montaldo said.

Each day of the conference included events that addressed current issues in the context of spiritual practices; sacred journeys; sacred world; and art and the sacred. The four contexts were a nod to Merton’s interests, including jazz. “Music and art and poetry attune the soul to God,” Merton once said.

Speakers sat on stage near a Shaker dining table, a reference to Merton’s appreciation of the religious sect’s values of simplicity, community and pacifism.

Merton met in the 1960s with the Dalai Lama, the exiled Tibetan Buddhist leader, and Thich Nhat Hanh, the Vietnamese Buddhist peace activist. Merton was seeking Asian methods of contemplation that would help his Catholic Church.

During a panel Friday on climate change, the Rev. Michael Czerny, a Jesuit priest, said the role of religion is “to remind us God is God and man is man. We’re making decisions as if there was no God and man is God. That is what the Greeks called hubris and what the Judeo-Christians call sin.”

“He said conferences were great, but real understanding comes one on one,” Montaldo said.

Religion Hub
An interfaith discussion on the role of religion in mental health
Follow us on Facebook!
Submit your photos to RNS