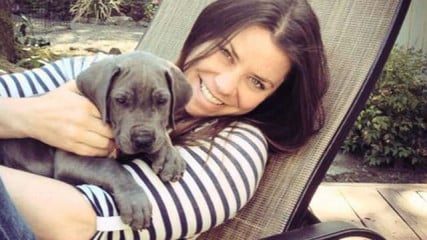 Brittany Manyard who died in Oregon Nov. 1, left a legacy of videos advocating for the legalization of physician-assisted dying in her home state of California.

(RNS) Right-to-die legislation passed a milestone in California Thursday (June 4) when the state Senate approved a bill to legalize physician-assisted dying in a 23-14 vote.

The End of Life Option Act now moves to the state Assembly, where it faces two subcommittees before a full Assembly vote. If it passes there, Gov. Jerry Brown has not yet said whether he would sign the bill, which would make California the most populous state to allow physicians to write lethal prescriptions for dying patients.

Looking on during the vote were the mother and husband of Brittany Maynard, the young woman with aggressive brain cancer who chose to end her life on Nov. 1, 2014.

In a series of emotional videos (sponsored by the right-to-die group Compassion & Choices), Maynard told the world she felt forced to leave her California home for Oregon, where physician-assisted dying is legal, because she could no longer live like the person she wanted to be. One of her videos, released after her death, called specifically for people to advocate for right-to-die legislation in every state.

Brown, who once studied in a Jesuit seminary, has not said if he would sign the legislation, but his office confirmed to the San Jose Mercury News that he did call Maynard at her Oregon home before her death.

The summary of Senate Bill 128 spells out that the bill “provides peace of mind and control for terminally ill Californians while safeguarding against coercion for those who are vulnerable.”

The act specifies lengthy and complex procedures to safeguard the process from abuse and exemptions for any health care practitioner and any health institution that refuses to offer such assistance.

It also specifically stipulates that it is not be called “suicide.” “Suicide” calls to mind depressed people and lovesick teens, but physician-assisted dying is strictly to be available for people with incurable and irreversible illness that will certainly kill them, likely within six months.

“Californians with terminal diseases should have the autonomy to approach death on their own terms, and I look forward to continuing this policy discussion in the Assembly,” Sen. Majority Leader Bill Monning, one of the co-sponsors of the act, said in a statement Thursday.

The act also stipulates that the person seeking to die with a physician-prescribed lethal drug must be able to make the request themselves directly. Advance directives or a request by someone else acting with power of attorney will not be accepted.

“Option” is in the name of the act because physicians will be required to “inform the individual of feasible alternatives or additional treatment options including, but not limited to, comfort care, hospice care, palliative care, and pain control.”‘

Similar right-to-die legislation is already law in Oregon, Washington state, Montana and Vermont and under discussion in several other states.

Opponents called the legislation an attack on the chronically ill, disabled and vulnerable. Dozens of faith-based hospitals, institutions and religious groups, particularly evangelical and Catholic organizations, as well as disability rights groups, testified against passage.

As the act moved through Senate committees in May, lawmakers also heard about another patient advocate with a legacy of opposition to physician-assisted dying.

Kara Tippetts, an evangelical Christian writer, died at age 38 from breast cancer. She spoke in videos, on her blog, Mundane Faithfulness, and in letters about why God would not want Maynard — or anyone — to choose death. YouTube features a trailer for a documentary in the works now on her life and final year.

In the weeks before Maynard’s death, Tippetts sent her an open letter. In it, she thanked Maynard for opening the door to public conversation on death and dying but she wrote: “Dear heart, we simply disagree … hastening death was never what God intended.”

California legislator Mike Morrell, a Senate Republican from Rancho Cucamonga, raised the alarm on Thursday, saying, “We are becoming a culture that devalues life,” according to the Contra Costa Times.

Monning’s reply to critics: “It is our constitutional responsibility to navigate the shores of a changing world — a world that sees this option as a compassionate option: death with dignity.”

“Brittany would be very proud to see the monumental shift occurring on the End of Life Option legislation,” her widower Dan Diaz, told Compassion & Choices.

“Brittany and I respect those who might not pursue this option if they found themselves in a situation similar to hers. However, no one should stand in the way of someone who is suffering from a terminal illness from making the decisions that are best for them. An End of Life Option law will not result in more people dying; it will result in fewer people suffering.”