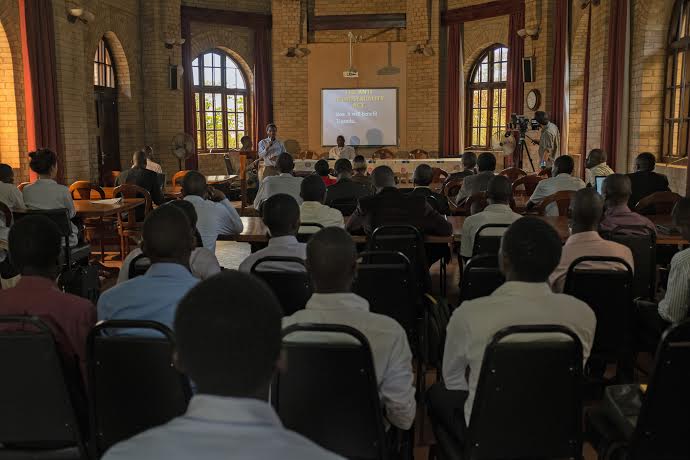 A still from “Vice” episode, “A Prayer for Uganda.” Photo courtesy of HBO

People are beaten, raped, evicted and dismissed from their jobs because of their sexual identity or orientation, the Rev. Anthony Musaala said during a talk at All Saints Catholic Church as part of a monthlong visit to the United States and Canada.

Even associating with or advocating for LGBT people may spur discrimination, he said.

Musaala, who spoke at the invitation of the All Saints Parish LGBT Task Force, estimates 500 gay and lesbian Ugandans are seeking asylum in Kenya. He recently met with U.N. officials, seeking increased financial support and human services for resettling “sexual refugees.”

He supports a worldwide refugee program for people affected by anti-gay policies and violence.

In 2013, Uganda’s parliament passed the “Kill the Gays” law, which called for life in prison for people who engage in same-sex relations. The law also punished individuals or groups that support gays. After international outrage, the constitutional court overturned the law in August 2014.

But Musaala said that did not end discrimination, and he said a new proposed bill may be even harsher.

The displaced don’t always find better circumstances in Kenya — already burdened with more than 650,000 refugees from other African nations, he said.

“When their status is revealed, the police are quite brutal,” Musaala said.

Musaala, 58, was born in Ireland and educated in England and Uganda. He was ordained in 1994 in the Archdiocese of Kampala and began ministering to gays and lesbians in 1999. His archbishop considered that work “not in step with the church,” Musaala said.

In March 2013, Musaala wrote a paper challenging priestly celibacy and criticizing African priests who abuse minors or father children and abandon them. His archbishop, Cyprian Lwanga, said the paper “damages the good morals of the Catholic believers and faults the church’s teaching.” He suspended Musaala indefinitely from priestly duties, which means the priest cannot celebrate the sacraments.

An energetic man who speaks with a British accent, Musaala is also an award-winning musician with a large following in Africa. Uganda’s Daily Monitor called him “a household name performing a cocktail of reggae to R&B.”

Before his suspension, some in the church had criticized the “Dancing Priest” for “desecrating the robes which are meant for the altar,” the newspaper reported.

Musaala now works with Ark Communes, which creates safe housing communities for LGBT people in Kenya, and he used his talk as an occasion to ask for donations for the organization.

Ugandan political and religious leaders say Westerners brought homosexuality to the country. But Musaala criticizes American evangelicals who “parachuted into Uganda and started spreading their message of hate.”

Last month, HBO’s documentary newsmagazine series “Vice” aired “A Prayer for Uganda,” which highlighted the anti-gay atmosphere Musaala described. The segment includes pastors who compare homosexuality to terrorism and pedophilia. It also shows a Ugandan newspaper that says, “Hang them. They are after our children.”

Uganda has “become like Sodom and Gomorrah,” Pastor Scott Lively said in the documentary, referring to the biblical cities punished with fire and brimstone for sin.

Lively, an American evangelist, was sued in 2012, accused of violating international law by inciting the persecution of gays and lesbians in Uganda. Since 2002, Lively has “conspired with religious and political leaders in Uganda to whip up anti-gay hysteria with warnings that gay people would sodomize African children and corrupt their culture,” The New York Times reported.

The “Vice” segment features a lesbian who said she became pregnant after four men raped her when they learned of her sexuality. It also talks with young men who tell a reporter they would kill gay men and rape lesbians.

The Rev. Kopya Kaoma, an Anglican priest who has testified before U.S. Congress and the United Nations on U.S. conservatives’ role in spreading homophobia in Africa, said anti-gay activists like Lively are motivated in part by the growing acceptance of gay marriage in the U.S.

Vince Sgambati, a parishioner at All Saints who attended Musaala’s talk, encouraged the 40 people in attendance to share the story of LGBT asylum-seekers.

“When you are queer, when you cannot live an honest life under heterosexist domination,” he said, “then you have to speak for your brothers and sisters everywhere.”

News
Across Africa, hijab in schools divides Christians and Muslims
Follow us on Facebook!
Submit your photos to RNS