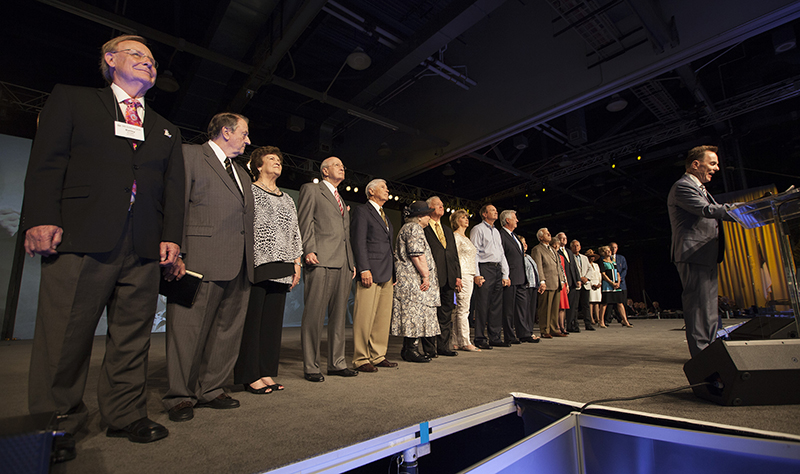 Southern Baptist Convention President Ronnie Floyd introduces past presidents and their wives, standing behind him, on Tuesday (June 16, 2015) during the morning session of the SBC annual meeting at the Greater Columbus Convention Center in Columbus, Ohio. Photo by Adam Convington, courtesy of Baptist Press

(RNS) Twenty years after the Southern Baptist Convention passed its landmark resolution on racial reconciliation, has it made any real progress?

Yes, and no, according to a new report by the denomination’s Executive Committee released during its annual meeting Tuesday (June 16).

But on the leadership level, a different picture emerges, the report notes. Though Southern Baptists were hailed for electing their first African-American president in 2012, the denomination’s Executive Committee, which handles the business of the denomination, has a mostly white management.

Reviewing the 249 individuals who’ve served on that committee since 1996, the report stated that 3.2 percent of members nominated and elected were from “non-Anglo racial or ethnic groups.”

Alan Cross, a Montgomery, Ala., pastor who successfully requested the report at last year’s annual meeting, said elements of the report — and the meeting itself — reflect a positive move forward. Bryan E. Smith, of First Baptist Church in Roanoke, Va., who is chairman of the Committee on Committees, gives a report during the Tuesday (June 16, 2015) afternoon session of the Southern Baptist Convention annual meeting at the Greater Columbus Convention Center in Columbus, Ohio. Photo by Bill Bangham, courtesy of Baptist Press

“Change is happening,” said Cross, author of “When Heaven and Earth Collide: Racism, Southern Evangelicals, and the Better Way of Jesus.”

The report called for the denomination’s president to report the racial/ethnic composition of the  Committee on Committees, which chooses the people who will nominate candidates for SBC boards.

The Committee on Nominations reported that 16 percent of the new nominees for seminaries, mission boards and other entities were racial/ethnic minorities.

The membership of the next nominations committee will have the largest-ever percentage of racial and ethnic minorities, with a makeup that is 27 percent nonwhite.

“We believed that as Southern Baptists are committed to reaching America for Christ, that our convention’s committees ought to reflect the faces of those in America for whom our Savior died to save,” said Bryan Smith, chair of the SBC Committee on Committees.

“That’s good news but we’ve got to keep that up every year,” he said.

Floyd sought to have a diverse range of speakers appear onstage during the meeting. At a Tuesday evening “National Call to Prayer” attended by more than 6,000 people, leaders of African-American, Asian, Hispanic and Native American groups joined in praying for reconciliation and repentance.

“We repent tonight of all racism and all prejudice,” Floyd prayed concerning the denomination and the nation during the evening session. “And tonight, in Jesus’ name, we come together as one family.” 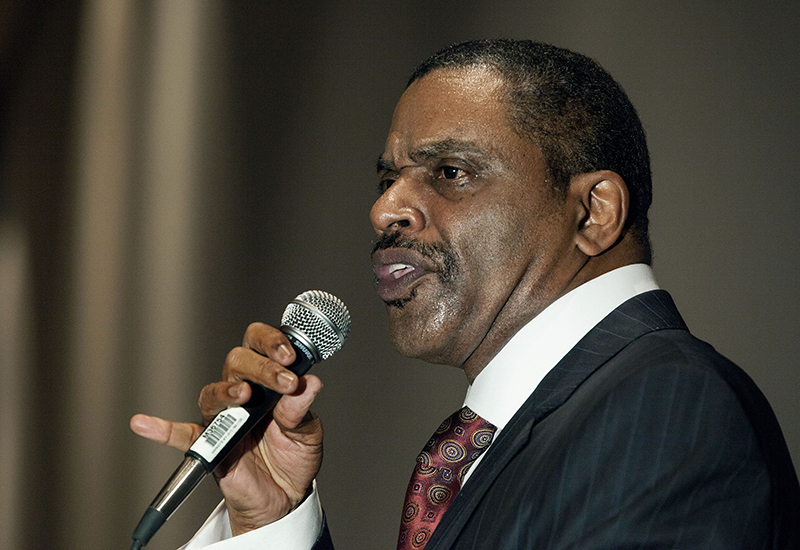 The Rev. Dwight McKissic, the African-American pastor of a church in Arlington, Texas, welcomed Floyd’s efforts on nominations but said the SBC still has a lot of “window dressing” since all of its top entity positions are held by whites.

“For a convention to claim that they’re interested in integration and inclusion, that is just unfathomable, inexcusable and very disappointing, very disheartening,” said McKissic, who did not attend the annual meeting this year due to schedule conflicts.

K. Marshall Williams Sr., president of the SBC’s National African American Fellowship, said growth in diversity is still needed but the SBC’s top leaders are “highly committed” to making it happen by including advisers from a range of racial and ethnic groups.

He said the monitoring puts “some teeth in the motions that were passed about improving more racial and ethnic diversity in the senior management of the convention,” he said. “It’s an awesome thing.”

During a business session of the meeting, Baptists passed a new resolution that acknowledged the need to continue to monitor progress on racial and ethnic diversity in their congregations and leadership.

“We urge Southern Baptist entities and Convention committees to make leadership appointments that reflect the racial and ethnic diversity of our communities in our local congregation and our entities,” the resolution reads. News
How the ‘apocalyptic’ Southern Baptist report almost didn’t happen
Follow us on Facebook!
Submit your photos to RNS