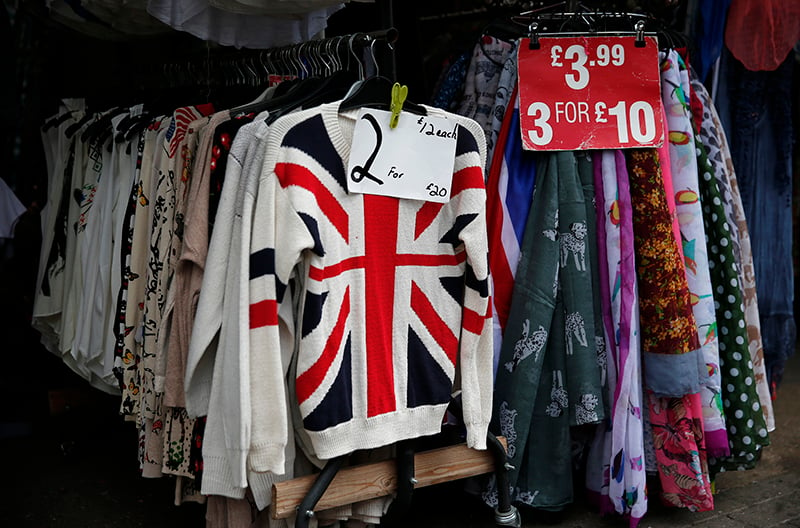 Pricing signs hang on clothing outside a shop in London on June 3, 2015. Photo courtesy of REUTERS/Suzanne Plunkett
*Editors: This photo may only be republished with RNS-ENGLAND-SUNDAY, originally transmitted on July 7, 2015.

CANTERBURY, England (RNS) Christian traditionalists may not like it one bit, but all-day Sunday shopping may be in the cards in Britain.

Chancellor George Osborne says that on Wednesday (July 8), he will propose in Parliament that communities be allowed to lift restrictions on supermarkets and department stores to let them trade all day on Sundays starting early next year. Smaller shops would also be permitted to open as long as they like on Sundays as long as local mayors and civil leaders see it as being necessary.

The move would bring London into line with Paris and New York, where no restrictions on Sunday shopping exist.

Strict anti-Sunday shopping laws came into being in the 19th century, under Queen Victoria.

In 1986, Prime Minister Margaret Thatcher tried to do away with them but she met stiff opposition from traditionalists and Christian churches.

Two decades later a compromise was reached, and most shops are now allowed to open for six hours on Sunday.

Just before this year’s general election in May, the Conservatives said they had “no current plans to relax Sunday trading laws.”

At that time the Church of England issued a statement saying, “We believe that for family stability and community life, as many people as possible should have the possibility of a common day off every week.”

Under current laws, Christians who object to working on Sundays cannot be fired by their firms. Trade unions are expected to seek assurances that those rights are not eroded under planned legislation that would accompany the change.