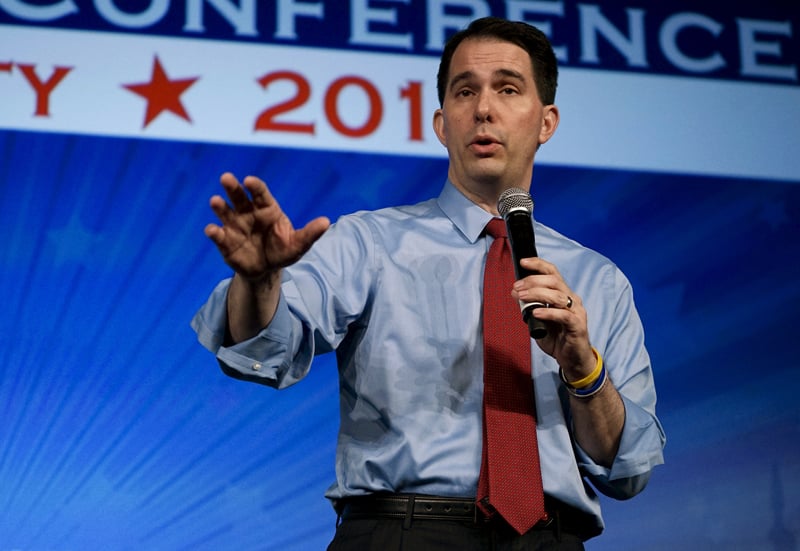 Wisconsin Gov. Scott Walker, Republican presidential candidate, speaks at the Southern Republican Leadership Conference in Oklahoma City on May 21, 2015. Photo courtesy of REUTERS/Rick Wilking *Editors: This photo may only be republished with RNS-WALKER-FAITH, originally transmitted on June 13, 2015.

UPDATE: Gov. Walker withdrew from the 2016 race on September 21.

(RNS) Scott Walker, best known for picking a fight with Wisconsin’s unions that led to protesters’ occupation of the state Capitol, credits prayer and his church for delivering him and his family through trying times.

The only governor in American history to survive a recall election, the Harley-riding Republican who declared himself a candidate for president Monday (July 13) has recently ramped up talk of his evangelical beliefs. Raised in a church parsonage, Walker scores high on Christian credibility with conservative voters who turn out so reliably in Republican primaries. Here are five faith facts about the Badger State’s two-term governor.

A “pastor’s kid.” Scott Walker’s father is the Rev. Llewellyn Walker, who moved the family from Colorado Springs to Plainfield, Iowa, for an assistant pastor’s job at the town’s First Baptist Church when the governor was a toddler. The governor’s mother, Patricia Walker, ran the Sunday school.

Llewellyn Walker, ordained in the American Baptist Churches USA — considered more moderate on social issues and theology than the larger Southern Baptist denomination — later led the First Baptist Church in Delavan, Wis. The governor preached sermons there as a teenager when his father was too ill to take the pulpit, according to The New York Times.

2. His current church is more conservative than his father’s.

With eight other Milwaukee-area churches that end in “brook,” Scott Walker’s Meadowbrook Church in Wauwatosa, Wis., is a smaller offshoot of the Elmbrook megachurch, once led by evangelical author and speaker Stuart Briscoe. Religion journalist Richard Ostling wrote in GetReligion that though Walker’s church is nondenominational, it includes “Baptist-style” practices and “upholds typical conservative Protestant theology.” That includes the belief that salvation is available only to those who accept Jesus Christ as their personal savior.

3. He left a church that was starting to welcome gays and lean leftward.

For more than a decade, Walker worshipped at the Underwood Memorial Baptist Church in Wauwatosa, an American Baptist church that hired a woman pastor in 2003. A year later, it affiliated with the gay-friendly Association of Welcoming and Affirming Baptists, and placed the rainbow flag of gay liberation on its church sign. Walker then left Underwood, because, many suspected, the then-candidate for governor considered it too liberal.

As Kevin Genich, a former Underwood member who knew Walker, told The New York Times: “As soon as we put the flag on the sign, he was out of there.” Walker said he left because he was looking for a place with more opportunities for his two young sons.

4. He believes God sent him a message through a devotional after he fell for a prank.

During Walker’s 2011 battles with Wisconsin’s unions, a prankster posing as billionaire industrialist David Koch called the governor. Walker told the fake Koch that he had considered planting “troublemakers” among crowds of pro-union protesters to discredit them. By his own admission Walker said that he sounded “pompous” during the taped and widely distributed phone conversation. He also said God was trying to teach him a lesson.

When he realized he had been duped, Walker wrote in his book about his trials as governor, he picked up a devotional by evangelist John Maxwell and read that day’s entry: “The power of humility, the burden of pride.”

“I hear you, Lord,” Walker recalled saying out loud.

5. He punted on evolution and President Obama’s Christianity.

Even Walker called it a punt. Liberal broadcaster Rachel Maddow had a field day with his Feb. 11 non-answer when asked if he accepts evolution. Walker’s high school science teacher, the now-retired Ann Serpe, said she had long ago explained evolution to her otherwise bright pupil and that he should have “manned up” to the question.

Later that month, Walker said he didn’t know whether President Obama is a Christian, even though Obama has repeatedly spoken publicly about his Christianity. Walker’s spokeswoman later said that Walker knows that the president is Christian, but didn’t appreciate the “gotcha” question.

Posted in
Beliefs Politics
Support RNS and get your donation doubled