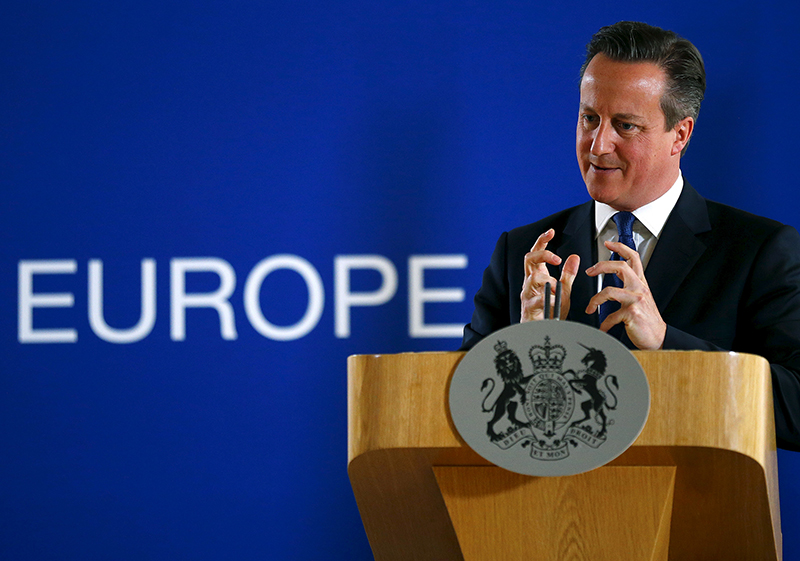 British Prime Minister David Cameron speaks during a news conference after the European Union leaders summit in Brussels, Belgium on June 26, 2015. Photo courtesy of REUTERS/Darren Staples *Editors: This photo may only be republished with RNS-UK-EXTREMISTS, originally transmitted on June 30, 2015 or RNS-CAMERON-ISLAM, originally transmitted on July 20, 2015.
July 20, 2015
Trevor Grundy

CANTERBURY, England (RNS) British Prime Minister David Cameron called the fight against Islamic extremists "the struggle of our generation" and warned that some young Muslims are drawn to fundamentalists in the same way young Germans were attracted to Hitler and Nazism in the 1930s.

Speaking on Monday (July 20) in Birmingham, Cameron said efforts must be made to reduce social isolation and alienation:

"There is a danger in some of our communities that you can go your whole life and have little to do with people of other faiths."

In a hard-hitting speech to launch a five-year plan to integrate the country’s 2.8 million Muslims into British society, Cameron said there had been a failure to accommodate people of different faiths in several parts of Britain.

"For all our successes as a multiracial, multifaith democracy, we have to confront a tragic truth that there are people born and raised in this country who don’t really identify with Britain,” he said. “So when groups like (the Islamic State) seek to rally our young people to their poisonous cause, it can offer them a sense of belonging that they can lack here at home, leaving them more susceptible to radicalization and even violence against other British people to whom they feel no real allegiance."

More than 28 percent of the residents of Birmingham are Muslims.

Among the initiatives unveiled: working to ensure people learn English; encouraging more Muslim women to enter the workforce; and passing a new law that will give Muslim parents the power to cancel their children’s passports if they fear their offspring are planning to join militant groups in Iraq or Syria.

Local members of Parliament have warned Cameron of huge problems ahead with as many as 2,000 young Muslims estimated to have traveled to Iraq and Syria to fight alongside the Islamic State.

Speaking directly to British young people, Cameron declared: "You are cannon fodder for them."