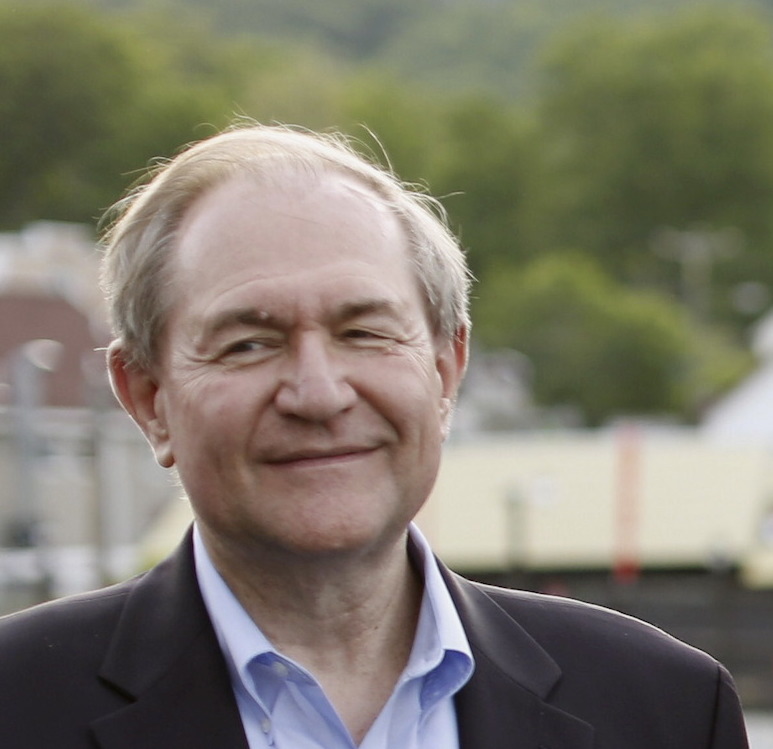 Yes, the former Virginia governor is still running for the GOP nomination. But you wouldn’t know it from his public presence. His poll numbers were so low he didn’t make it to second debate among the second string candidates in September. And Slate’s Twitter monitor of candidates, on Oct. 9, found him in last place on social media, too.

In one of his few interviews since entering the race, he didn’t see a moral imperative to taking in refugees fleeing Syria. Gilmore told Fox News:  ”We have our own problems here. We have people who were born here, raised here, who are having trouble getting jobs, who are having trouble making it in life. What, are we going to bring these folks in, put them on the welfare state and reduce the benefits that are already here for other people? Are we going to try to get them jobs? We can’t get our own people jobs?”

(RNS) James Gilmore III, former governor of Virginia, briefly chairman of the Republican Party and unsuccessful candidate for the U.S. Senate in 2008, jumped into the 2016 presidential race Friday (July 31).

Gilmore, 65, who is now president of the Free Congress Foundation, a conservative research group, likely won’t make it to the Aug. 6 televised debate on Fox News, but he spelled out his bona fides by announcing his run at the website of another voice of conservatism – Breitbart News.

1. He’s a lifelong United Methodist (possibly the only trait he shares with Hillary Clinton).

Gilmore’s mother, Margaret Evelyn Kandle, was a Methodist church secretary, and his father, James Stuart Gilmore Jr., was a union butcher at a grocery chain according to profiles at NPR and Newsmax. He’s always listed his church as River Road United Methodist Church in Richmond, his birthplace. He told USA Today in 2007 he attended as often as his travel schedule allowed.

2. Obama’s prayer breakfast speech was an outrage in Gilmore’s eyes.

He blasted the president’s 2015 prayer breakfast speech after Obama cited the Crusades, the Inquisition, slavery and Jim Crow as “terrible deeds in the name of Christ.” Gilmore told The Washington Post, those words were “the most offensive I’ve ever heard a president make in my lifetime. He has offended every believing Christian in the United States. This goes further to the point that Mr. Obama does not believe in America or the values we all share.”

3. He’s focused on the economy and national security. No mention of testy social issues.

The campaign website, GilmoreForAmerica.com, details his plans to bolster the economy and offers a video of him declaring his candidacy. It attacks what he calls “the Obama-Clinton” administration at length, but God is only mentioned with the politically obligatory God-bless-America end line.

But he has taken positions on abortion and gay rights in the past.

Back in 2007, when he also made a brief run for the presidency, Charmaine Yoest of Americans United for Life cheered, saying Gilmore as governor had “surrounded himself with pro-life, economic and social conservatives. And implemented pro-life, pro-family recommendations.”

The Advocate led readers to its politics page coverage of Gilmore’s 2016 run by saying “Another Antigay Republican Enters Presidential Race.” The editors said Gilmore had not responded to emails asking if he still opposed gay marriage and civil unions.

4. He’s the Gilmore in the Brown v. Gilmore Supreme Court case on school moments of silence.

As governor, he backed and signed a law adding a mandatory moment of silence in Virginia public schools. Gilmore saw no constitutional infringement in setting aside a minute for “meditation, prayer or reflection” at the start of every school day. The law was challenged by the American Civil Liberties Union, but the high court upheld it.

The Washington Times, in endorsing Gilmore’s 2008 Senate bid, cited his rebuke of Democratic opponent Mark Warner on values. Gilmore hammered Warner for asserting that four groups — the Christian Coalition, the National Rifle Association, home-schoolers and anti-abortion activists — were “threatening to what it means to be an American”. To no avail. Warner handily defeated Gilmore, winning a seat in the U.S. Senate.