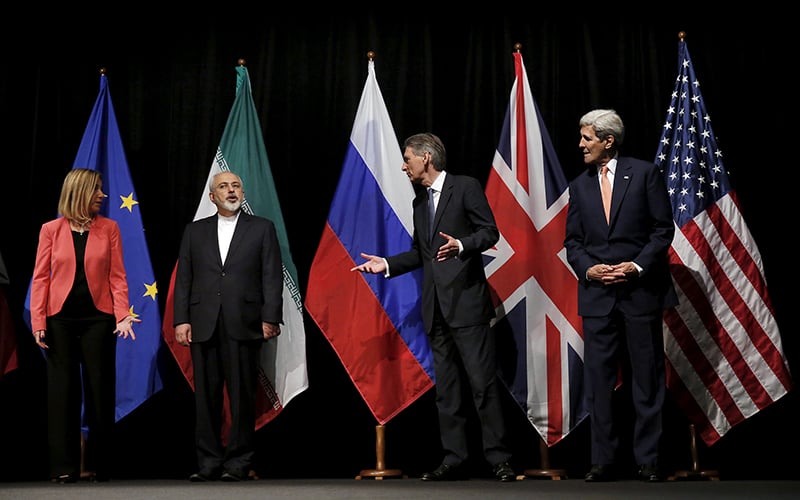 Left to right, European Union High Representative for Foreign Affairs and Security Policy Federica Mogherini, Iranian Foreign Minister Mohammad Javad Zarif, British Foreign Secretary Philip Hammond and U.S. Secretary of State John Kerry talk while waiting for Russian Foreign Minister Sergey Lavrov (not pictured) for a group picture at the Vienna International Center in Vienna on July 14, 2015. Iran and six major world powers reached a nuclear deal on July 14, 2015, capping more than a decade of on-off negotiations with an agreement that could potentially transform the Middle East, and that Israel called an “historic surrender.” Photo courtesy of REUTERS/Carlos Barria *Editors: This photo may only be republished with RNS-REACTION-IRAN, originally transmitted on July 14, 2015, and with RNS-IRAN-JEWS on August 13, 2015 and with RNS-RABBIS-IRAN, originally transmitted on August 17, 2015.

(RNS) For the Jewish people, the pursuit of peace is a fundamental religious duty. Our tradition implores us to “seek peace, and pursue it” (Psalms 34:14); unlike other commandments that obligate us when they come our way, we must pursue peace at every opportunity.

The deal with Iran seeks to prevent Tehran from obtaining a nuclear bomb while also reaffirming the United States’ commitment to the pursuit of peaceful foreign policy solutions. We are not naive about the dangers of Iran’s nuclear program and regional ambitions; we embrace the agreement precisely because it is our best available option to ensure the security of the United States, Israel, and the entire world.

In light of this agreement, we are deeply concerned with the mistaken impression that the current leadership of the American Jewish community is united in opposition to the agreement. Despite what has been portrayed, these leaders do not represent the majority of Jewish Americans who support Congress’ approval of this deal. We, along with many other Jewish leaders, support this historic nuclear accord by the world’s most powerful nations and believe it is our best hope of preventing a nuclear-armed Iran.

Some people claim that to fully support the State of Israel and its security needs, American Jews must oppose the deal. This is simply untrue. In fact, we’ve seen many of the leaders of Israel’s military and intelligence community declare that this deal is the best path for Israel moving forward.

The pursuit of peaceful solutions is rife with uncertainties. While there is a real and severe sanctions snapback provision were Iran to cheat, there are no absolute guarantees. We hope that the United States, Israel and our other allies will work together to challenge Iran’s support of terrorist groups and other destabilizing actions in the region. We hope the United States and Israel will work to reaffirm our close friendship and work together in the defense of our shared values.

While we represent over 300 leading rabbis in support of the agreement, we also understand the divisiveness of this serious issue. Intellectual dispute is fundamental to Jewish learning and we welcome the wide range of perspectives and careful analysis. We hope that the disparate opinions among many mainstream members of the American Jewish community are welcomed with the respect and thoughtfulness they deserve.

As Jews, we are deeply committed to the welfare of the State of Israel. We understand the concerns of Prime Minister Benjamin Netanyahu and many Jews around the world about the character of Iran’s leaders. We acknowledge these valid reservations, but we believe a nuclear-armed Iran is an even greater danger to Israel’s security. We believe that this deal is our best available option at halting Iran’s nuclear weapons program.

We commend the United States negotiating team, including Secretary of State John Kerry and Secretary of Energy Ernest Moniz, along with the six major powers negotiating with Iran — Britain, China, France, Germany, Russia and the United States — for their courage and dedication in reaching an agreement to prevent Iran from obtaining nuclear weapons. As Jews committed to the highest values of our tradition, as Americans who support nonproliferation, and as staunch supporters of the security of the State of Israel, we urge our elected officials to support this accord. 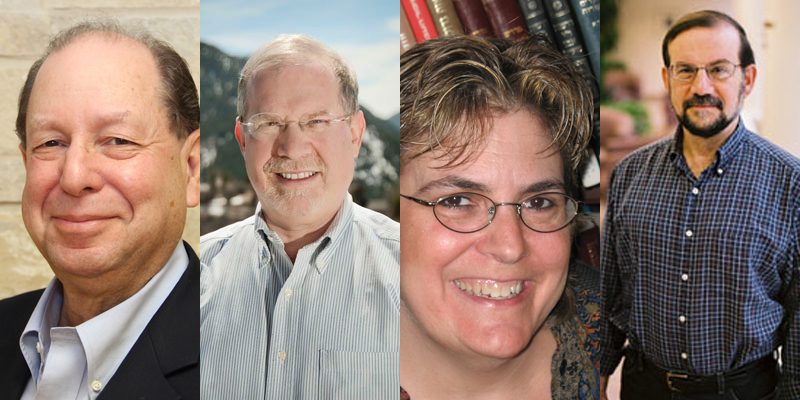 Left to right, Rabbi Steven Bob serves as a senior rabbi in Lombard, Ill. Rabbi Sam Gordon is a lead rabbi in Wilmette, Ill. Rabbi Rachel Mikva was a congregational rabbi for 13 years and now works as a professor of Jewish Studies. She also directs the Center for Jewish, Christian and Islamic Studies in Chicago, Ill. Rabbi Burt Visotzky, Ph.D., works and lives in New York City where he has served as a rabbi for 38 years. Photos courtesy of each rabbi

This statement was signed by 340 rabbis.

(Rabbi Steven Bob serves as a senior rabbi in Lombard, Ill. Rabbi Sam Gordon is a lead rabbi in Wilmette, Ill. Rabbi Rachel Mikva was a congregational rabbi for 13 years and now works as a professor of Jewish studies. She also directs the Center for Jewish, Christian and Islamic Studies in Chicago, Ill. Rabbi Burt Visotzky, Ph.D., works and lives in New York City where he has served as a rabbi for 38 years.)