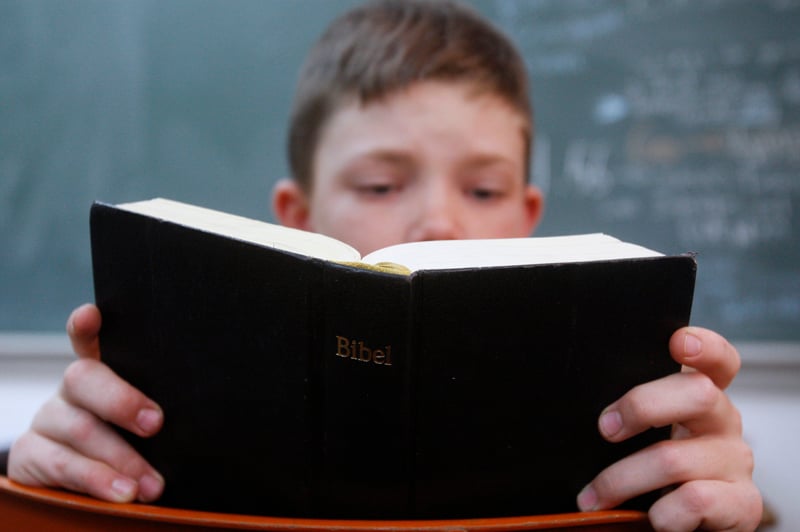 A boy from the Mennonite community reads the bible at his school in Cuauhtemoc, Mexico o November 8, 2012. Photo courtesy of REUTERS/Jose Luis Gonzalez
*Editors: This photo may only be republished with RNS-WAX-COLUMN, originally transmitted on August 17, 2015.

(RNS) Before you read this article, be warned! You may come across something you disagree with, or an idea that makes you uncomfortable, or a statement that causes offense. Please shut off your mobile device or close your browser, and back away slowly from your computer.

I’m kidding, of course. But only a little.

There’s a movement afoot in many universities and colleges across the country. It’s driven by the vision for the campus to be a “safe space” where ideas and words that make someone uncomfortable can be easily avoided. In New York magazine, Jonathan Chait describes it as a renewed strain of political correctness, a kind of “language policing” that poisons political debate and shuts down discussion.

In The Atlantic, Jonathan Haidt and Greg Lukianoff argue that this strain of political correctness is primarily about “emotional well-being,” protecting students from psychological harm. It’s “the coddling of the American mind,” they say, in a twist on Allan Bloom’s famous work, “The Closing of the American Mind.”

One example of turning college into a “safe space” is the recent trend of putting “trigger warnings” on books — alerts from a professor that something in the course may stir up a strong, emotional response from the students. The motivation behind trigger warnings is sensitivity to people who have had traumatic experiences, a way of letting them know they may be disturbed by what they read.

Unfortunately, in a collegiate atmosphere tense with the fear of perpetual offense, the number of “triggers” have multiplied, and many of the most important books in history are getting labeled, and in some cases, dismissed.

Can you imagine how many trigger warnings the Bible would get? If there has ever been a book that is designed to make you uncomfortable and challenge your way of thinking, it’s the Bible.

Christian radio stations love to say they’re “safe for the whole family,” but that slogan wouldn’t fit if they were reading the whole Bible out loud as part of their programming. Violence, abuse, torture, rape, slavery — these are the warnings we’d have to issue by the time we finished reading the Bible’s first book, Genesis.

The further you read, the more challenges you find to today’s political correctness. The storyline of the Bible starts with a God who created human beings in his image as the crowning achievement of his creation (trigger warning: speciesism!). He created humans male and female (gender binary alert!) to subdue and cultivate the Earth (ecology alert!), to join together as the two halves of humanity in covenant marriage (marriage discrimination!), to be fruitful and multiply and fill the Earth with icons of his glory (overpopulation!).

After the human race revolts against God, the stories of the Bible follow a long line of humans who are idolatrous to the core, willing to substitute anything and everything for worshipping God (low self-esteem!). The diagnosis for humanity is bleak, but the thread running through the narrative is one of God showing mercy and grace to his chosen people, Israel, (ethnocentrism!) in order that he might one day bless the whole world.

For Christians, God’s rescue plan happens only through sacrifice — blood sacrifice that covers our guilt and shame (Sorry, PETA!). Their Bible climaxes with Jesus the Messiah who lives the life God always intended for humanity, shows the world what God is like, extends mercy to those who oppose him, and willingly offers himself as the final and ultimate sacrifice for the sins of the world. In the Gospels, the trigger warnings multiply: torture, injustice, abuse, and execution.

No “trigger warnings” stitched onto the earliest New Testament manuscripts would have been more accurate than to say, “Warning — this story may change your life.” Because, for 2,000 years, people who encounter Jesus in the pages of the New Testament find themselves transformed. And week after week, they gather to sing and celebrate the breaking of his body and the shedding of his blood (trigger warning: torture!).

READ: Does Ben Carson have a blind spot on fetal tissue?

Whether or not you believe the primary message of the Bible, surely we can agree that it is counterproductive to try and shield people from the most influential book of all time. This is where trigger warnings, no matter their good intentions, let us down. They assume it is damaging to our emotional health to come into contact with powerful ideas that may disturb us or challenge our outlook on life.

I’m glad we live in a free society where we don’t have to worry about a totalitarian regime banning or burning certain books. But what happens when the tyrant forbidding us to read great literature is our own emotional well-being?

What happens when we sever ourselves from the books that made Western civilization? If the coddling of the American mind continues unabated, with its tendency to dismiss ideas that offend us, we may one day find ourselves in a brave new world, a world in which the powerful won’t need to round up and burn “dangerous” books by force, because the populace will have already burned them all by choice.