(RNS) Jerome Socolovsky, an award-winning journalist with experience at some of the world’s leading media organizations, has been named Religion News Service’s new editor-in-chief.

Socolovsky, a seasoned religion reporter and editor who has worked for Voice of America, National Public Radio, The Associated Press and United Press International, will lead an editorial staff of six reporters and editors, and dozens of bloggers and freelancers. 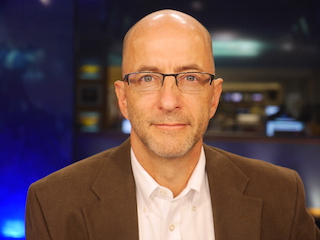 Jerome Socolovsky is the new editor-in-chief of Religion News Service.

He will begin his new role in November.

“I’m honored and thrilled to have been chosen to lead such a superb team of reporters and commentators,” Socolovsky said. “Their clear and balanced reporting on religion has never been more vital in our world, where belief is a crucial and often misunderstood component of so many news stories. I have long been fascinated by religion in all its forms, and intend to lead an organization that engages in ambitious and innovative coverage of a broad range of issues.”

Socolovsky succeeds Kevin Eckstrom, who stepped down in May after 15 years with RNS, the last nine of which he served as editor-in-chief. Socolovsky was appointed by the RNS Board of Managers this month after a national search.

In his new role, Socolovsky will lead the editorial team in producing news, commentary and photos for RNS’ online audience at ReligionNews.com and more than 100 media partners. RNS is the world’s only nonprofit news site and syndication service devoted to unbiased, nonsectarian coverage of religion, spirituality and ideas.

“Jerome’s deep experience on the religion beat and enthusiasm for digital news will be a winning combination for RNS,” said Heidi Thompson, RNS publisher and CEO. “He brings an international perspective and an eagerness to explore new ways to tell the story of how religion impacts our world.”

Socolovsky arrives at RNS after five years as the religion correspondent at Voice of America, where he produced TV, radio and online reports covering the dynamics of faith in the U.S. for overseas audiences. Prior to that, he was a Spain-based correspondent for National Public Radio for seven years, during which he covered the Madrid train bombings, the influx of immigrants and the European economic crisis. His freelance work has appeared in number of international publications, including the Canadian Broadcasting Corp., Deutsche Welle Radio, the Jewish Telegraphic Agency and The Economist.

He holds a B.S. in mechanical engineering from the University of Pennsylvania, an M.S. in religious studies from Hebrew University in Jerusalem, and an M.P.A. with a focus in religion and politics from Harvard University.

RNS was founded in 1934 by journalist Louis Minsky to provide fair, balanced, nonsectarian news about religion to the secular and religious press.

From its editorial offices in the National Press Building in Washington, D.C., RNS provides daily coverage of national and international religion news to some of the nation’s leading news outlets, including The Washington Post, Religion & Ethics NewsWeekly, USA Today, The Huffington Post, National Catholic Reporter, and The Christian Century.