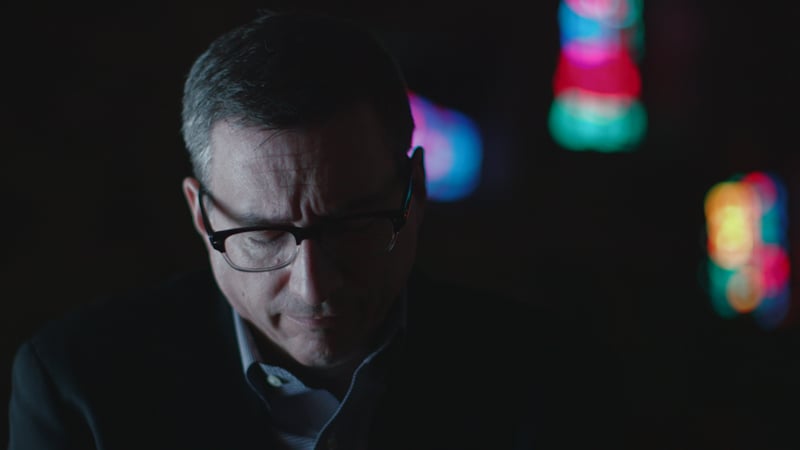 Rob Schenck prays in a church during a scene from “The Armor of LIght.” Photo by Jeff Hutchens, courtesy of Fork Films

WASHINGTON (RNS) The Rev. Rob Schenck has a question for his fellow evangelical clergy.

“Every person who carries in your congregation is prepared to kill someone today,” he says he tells them on his new crusade about gun violence. “Are you helping them with that decision as a Christian?”

Schenck, the Washington-based leader of the Faith and Action ministry, has been known for his anti-abortion work for three decades. In the new documentary “The Armor of Light,” which releases Friday (Oct. 30) in more than 20 cities nationwide, he is first seen as many know him: carrying a preserved fetus in his hands at a rally in Buffalo, N.Y., in 1992.

But after personally seeing the bodies of the Amish schoolchildren prepared for a funeral after being gunned down in 2006, he began to realize he needed to care more about life outside the womb, too.

Schenck, 57, credits two other catalysts that led him to devote half his time to the issue of gun violence. He lives in the neighborhood of the Washington Navy Yard, where a shooter killed 12 people in 2013. And he was encouraged by Lucy McBath, the mother of Jordan Davis, an unarmed black Florida teen killed in 2012, to speak out. 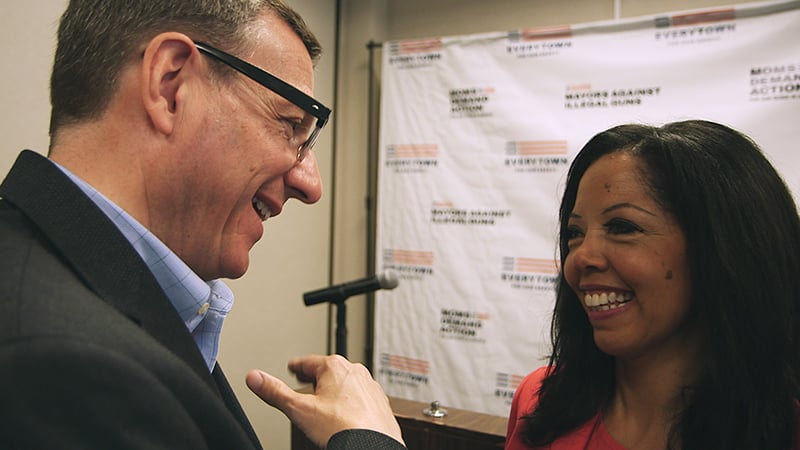 Rob Schenck speaks with Lucy McBath in a scene from “The Armor of Light.” Photo by Jeff Hutchens, courtesy of Fork Films

“I have had pro-life colleagues say to me, ‘More babies are aborted than adults are shot, so why are you taking this on?’” he said in an interview. “Maybe I have to rely on my Jewish background for this, but every life is of equal value.”

Schenck, whose father was Jewish and kept scrapbooks of Holocaust images, said he was reminded anew of the value of all of humanity when he studied theologian Dietrich Bonhoeffer in his 50s for his seminary doctoral work.

“When people take a gun on their body,” he said, motioning as if carrying a gun on his right hip, “even if only to protect themselves and their loved ones, it changes the relationship you have with another human being because it suggests, at least, that if we find ourselves in conflict, you will be injured or die and I will survive and those are the terms of our relationship.”

READ: Survey: Americans SAY gun control is important, but do they mean it?

When filmmaker Abigail Disney, grandniece of Walt Disney, approached Schenck about being featured in her film about gun control, he agreed. She trailed the tall, bespectacled man, who has offered Communion at the Capitol and knelt in protest on the Supreme Court steps, as he toured the country and talked to evangelicals in listening sessions and sermons about their views on guns and God.

Schenck, a member of the religious liberty advisory committee of Jeb Bush’s presidential campaign, said he is not advocating a particular policy change. Instead he is talking with groups at white churches and black churches about how they should teach and preach about gun violence. He notes that Christians can fight against abortion and gun violence despite the existence of Roe v. Wade and the Second Amendment.

“We appeal to a higher moral law,” he said.

In the Fork Films documentary, Schenck says many evangelicals are members of the NRA and he expresses concern about how much the 5 million-member organization is shaping their mindset.

Schenck emphasized “I’m not anti-NRA,” but he thinks the group’s rhetoric is harmful. 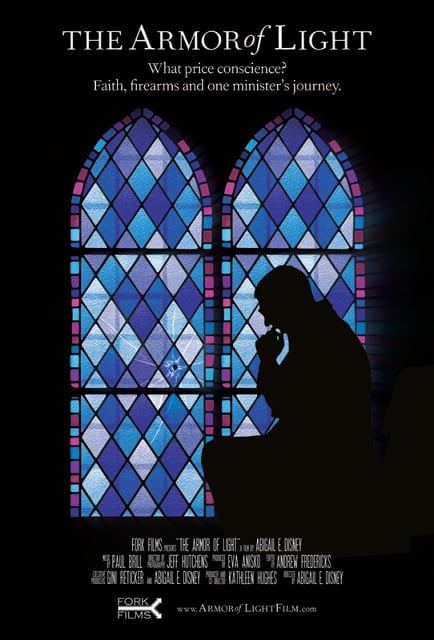 “They are fostering a culture that suggests to people they can solve the problem of security threats to themselves and others by simply buying a gun and using it and that to me is really bad advice and destructive,” he said.

Schenck said he prefers the model of Jesus, who rebuked the disciple Peter when he tried to defend Jesus with a sword.

NRA spokeswoman Amy Hunter did not immediately comment about the film but said the organization does not keep information about the religion of its members.

READ: A consistently pro-life ethic should include gun control (COMMENTARY)

Schenck thinks fear is a big influence on those who oppose stricter gun control measures, including a large percentage of evangelicals.

“Fear is in many ways a failure of faith, so it is a contradiction to the Christian life and message,” he said.

Schenck is already grappling with negative responses from his peers and donors to his ministry.

“You’re afraid of firearms; I’m not,” Troy Newman, president of the anti-abortion Operation Rescue, tells Schenck in the film.

The Rev. Steven Martin, communications and development director of the National Council of Churches, said Schenck took an “incredible risk” with the film.

“I could see Rob was willing to go where his conscience was leading him even though this put him at a crossroads with his tribe,” said Martin, a friend of Schenck’s. “That’s one of the most difficult choices a person can make.”

In fact, Schenck’s ministry has already lost $130,000 in donor income — about 10 percent of his budget — and he expects it will lose more.

But he says it is worth it: “It’s a matter of life and death.”