(RNS) The ‘Splainer (as in “You’ve got some ‘splaining to do”) is an occasional online feature in which RNS staff give you everything you need to know about current events to hold your own at a cocktail party.

Since September, four Muslims in India have been killed by predominantly Hindu mobs after they were suspected of either eating beef or slaughtering a cow, considered sacred by the country’s majority Hindus. What is behind the religious beliefs underpinning these killings? Let us ‘Splain ... 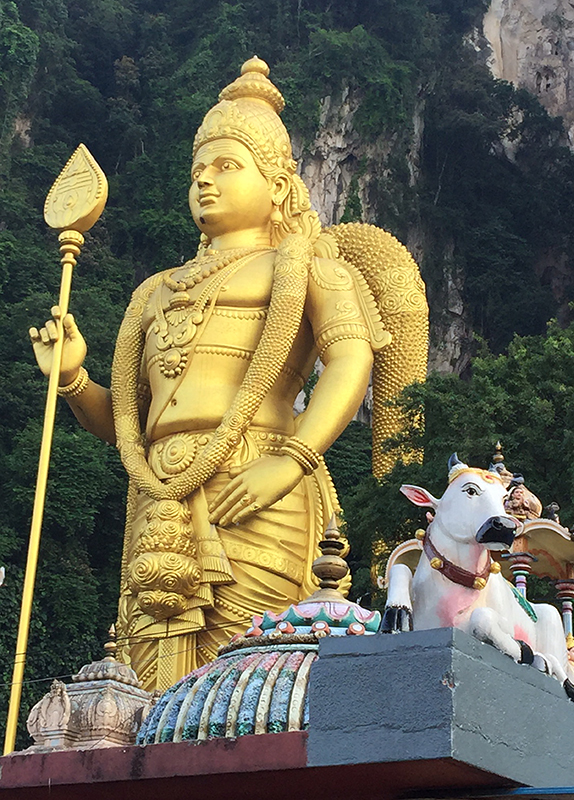 A colorful cow figure rests at the feet of the Hindu god Murugan at a Hindu temple at the Batu Caves in Kuala Lumpur. Religion News Service photo by Kimberly Winston

A: No. Hindus do not consider the cow to be a god and they do not worship it. Hindus, however, are vegetarians and they consider the cow to be a sacred symbol of life that should be protected and revered. In the Vedas, the oldest of the Hindu scriptures, the cow is associated with Aditi, the mother of all the gods. Hindu imagery often pictures a pretty cow -- usually white -- garlanded with flowers as a sign of the faith’s special reverence. Hindus even have a “cow holiday” called Gopastami (this year on Nov. 19) when all cows -- even the ones left to wander through busy streets and rural villages -- are washed and dressed with flowers. To harm a cow or kill a cow -- especially for food -- is considered taboo by most Hindus.

Q: Why are cows considered so sacred? Why not some other animal, like the cat of ancient Egypt?

A: Hindus see the cow as a particularly generous, docile creature, one that gives more to human beings than she takes from them. The cow, they say, produces five things -- milk, cheese, butter (or ghee), urine and dung. The first three are eaten and used in worship of the Hindu gods, while the last two can be used in religious devotion or in penance or burned for fuel. When was the last time your cat gave you anything besides a dead mouse? And here’s a fun fact -- Hindus associate several animals with different gods and consider them sacred, including the monkey (Hanuman), the elephant (Ganesh), the tiger (Durga) and even the rat (Ganesh). But none is as revered as the cow.

A: No. In ancient India, cattle and oxen were sacrificed to the gods and the meat was eaten. But even then, milk-producing cows were off-limits, likely because their milk was so precious as a food source. But with the rise of Buddhism and Jainism -- two other world religions with roots in India and a philosophy of vegetarianism -- Hindus, too, stopped eating meat. By the first century A.D., cows had come to be associated with Brahmans, the highest caste, or class, in Hinduism. To kill a cow was likened to killing a Brahman -- a big taboo. Soon after, Krishna, an incarnation of Vishnu, one of the three main Hindu gods, was often depicted in literature and art as cavorting with cows.

Q: What's behind the current events in India? Why are Hindus apparently killing Muslims over cows?

A: There is a lot more at work here than just vegetarianism or a reverence for the bovine. India's prime minister, Narendra Modi, came to power in 2014 at the head of the Hindu nationalist Bharatiya Janata Party, or BJP. In speeches, Modi has condemned the "widespread killing of our cows" and has been criticized for being largely silent or late to comment on the slayings of Muslims suspected of eating beef or slaughtering cows. Vigilante groups such as "Save the Cow" have arisen, barging into the houses of Muslims, looking for beef. Ten members of "Save the Cow" were arrested in October after they allegedly killed a Muslim man suspected of having beef in his refrigerator. Local police say he did not. One member of Save the Cow told The New York Times, “We are more attached to the cow than our own children.”