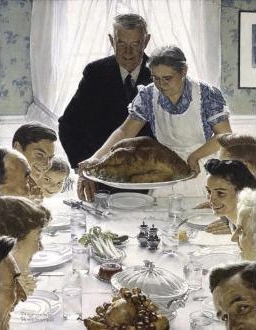 The food having been consumed, the visitors having returned to their domiciles, I can turn to the question posed in a Thanksgiving Day email by my old friend Guy Stroumsa, the Martin Buber Professor of Comparative Religion emeritus at the Hebrew University and Professor of the Study of the Abrahamic Religions emeritus at Oxford. Guy, who is spending the semester in Ann Arbor, wrote:

Watching on the Guardian this morning, Obama, flanked by his two daughters, releasing one of the two turkeys, sent to freedom in the name of the American people, while the other is being slaughtered for the festival. Is this a remembrance of the two goats sent by the High Priest on Yom Kippur, one to Azazel (and its death in the desert), the other being slaughtered in sacrifice? (Leviticus 16: 8).

Let's begin by noting that Thanksgiving is the harvest festival of the American Civil Religion. We commemorate the arrival of the Puritans (renamed Pilgrims in the 19th century) by traveling to the domestic shrines of relatives and friends. There we give thanks for our blessings over the same animal, a roasted native fowl.

There is some resemblance here to Sukkot, the great harvest festival of the Israelites that entailed a pilgrimage (hag) to the Temple in Jerusalem, recapitulating with a surfeit of sacrificed animals their aboriginal pilgrimage from Egypt to the Promised Land. Sukkot is the third of the High Holidays, which begin with Rosh Hashanah (the New Year) and continue with Yom Kippur (the Day of Atonement).

As Guy notes, part of the ancient Yom Kippur ritual involved a casting of lots over two he-goats, one of which was sacrificed to the Lord as a "sin offering" while the other was sent into the wilderness to Azazel -- possibly a place but widely believed to be some demonic power. This other has given us the term "scapegoat," because, according to the MIshnah, the high priest of the Second Temple would, before having it sent on its way, place his hands on it and say, "O God, Thy people, the house of Israel, has sinned and transgressed before Thee…."

A sin offering (קרבן חטאת) was made to atone for unintentional sins. The scapegoat, it seems, was symbolically laden with the sins that had been committed intentionally.

And what of the Thanksgiving ritual performed by the American Civil Religion's high priest -- the Presidential Turkey Pardon (PTP)?

Although presidents began to be formally presented with turkeys in 1947, the pardon ritual dates only to 1989, the first year of the presidency of George H.W. Bush. Initially, it seems, only one of the birds received was pardoned, leading to a Thanksgiving 2000 episode of The West Wing in which press secretary C.J. Cregg introduces the subject to her boss:

C.J: Um, Mr. President?
Bartlet: Yes?
C.J: Hi
Bartlet: Hi
C.J: I'm sorry to ask you this, Sir, but -
Bartlet: Not too late to stop yourself
C.J: I need you to pardon a turkey
Bartlet: I already pardoned a turkey
C.J: I need you to pardon another one.
Bartlet: Didn't I do it right?
C.J: You did it great, but I need you to come out here and pardon another one.
Bartlet: Aren't I going to get a reputation for being soft on turkeys?
C.J: Sir, can you just come out here and get this over -
Bartlet: No, I'm not going to - C.J. - what the hell is going on?
C.J: They sent me two turkeys.  The more photo-friendly of the two gets a presidential pardon and a full life at a children's zoo.  The runner-up gets eaten.
Bartlet: If the Oscars were like that I'd watch.

C.J. gets her boss to pardon the second turkey, which he does by drafting it into the military -- a joke that presumably would have been less amusing, if more to the point, the following year (cf. the October 2001 military invasion of Afghanistan).

Subsequently, according to Wikipedia, both turkeys have received pardons, with the implication -- made explicit by President Obama this year -- that if the first turkey cannot serve, the second one will take its place.

So my conclusion is this. In its first decade, the PTP was very much modeled on the ancient Israelite ritual of the two goats, with one animal sacrificed and consumed and the other liberated and sent to live out its days as best it could. But perhaps as a result of the West Wing episode, the double pardon was instituted, with the institution transformed from a rite of atonement to a species of beauty pageant. From the perspective of religious ritual, I wouldn't say that's been an improvement.