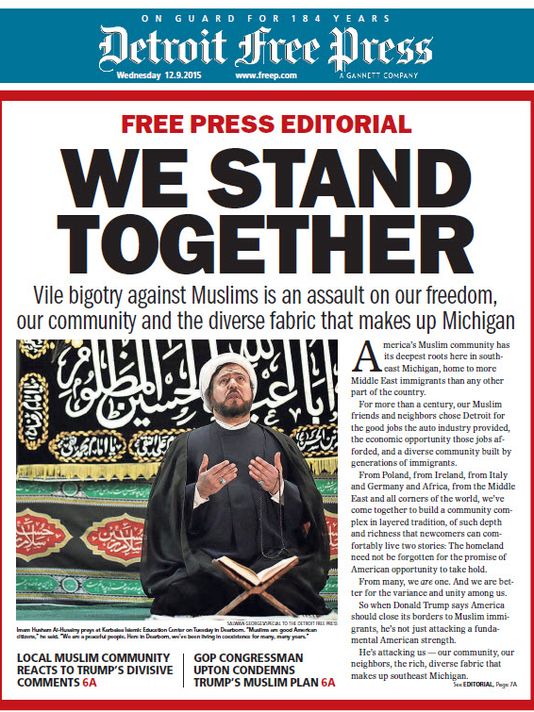 “We Stand Together” appeared on the cover of the Detroit Free Press on Dec. 9, 2015.

(RNS) The largest newspaper in Michigan, home to one of the largest Muslim populations in the U.S., attacked Donald Trump in a front-page editorial on Wednesday (Dec. 9) for his “rank bigotry and racism” against Muslims.

Taking the unusual step of publishing a front-page editorial, the editorial board of the Detroit Free Press wrote that they were somewhat reluctant to denounce Trump, the front-runner in the contest for the Republican nomination for president, because such criticism often solidifies support for him among those who admire the businessman as an outsider who speaks his mind when others will not.

“But some slurs are so heinous that they must be answered,” the editorial reads. “And some lies are so vile that they become dangerous if not met with truth, and strength.

“Trump’s indictment of Muslims en masse is nothing more than rank bigotry and racism, a reach back to the darkest chapters of America’s history and a betrayal of the founding principles of our nation,” it continues.

Trump on Monday said he would prohibit Muslims from entering the U.S., a call widely denounced by politicians in both major parties and considered illegal by legal experts.

The front-page denunciation of Trump comes days after The New York Times published a front page editorial — a rarity for almost all major U.S. mainstream newspapers — on gun violence and American politicians’ failures to stop the proliferation of firearms.