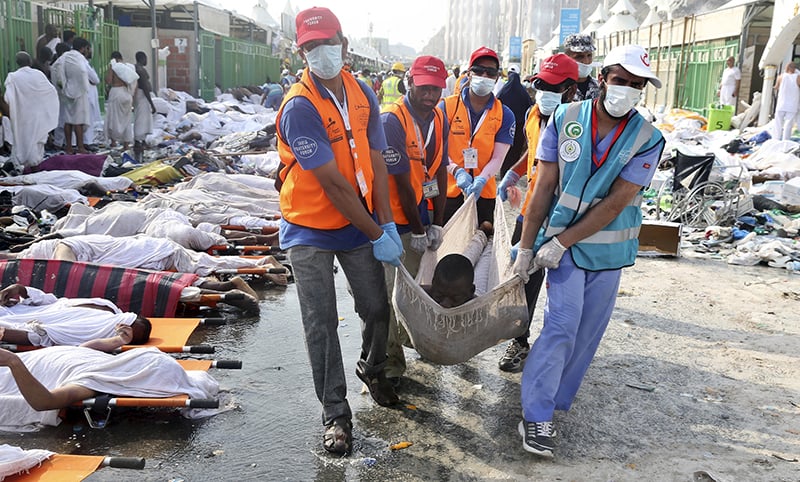 Rescue workers carry the body of a Muslim pilgrim after a stampede at Mina, outside the holy Muslim city of Mecca, on Sept. 24, 2015. Photo courtesy of REUTERS/Stringer
*Editors: This photo may only be republished with RNS-HAJJ-CASUALTIES, originally published on Dec. 10, 2015.

(RNS) A horrific stampede in Mina in September actually killed at least 2,411 pilgrims, more than three times the number that Saudi Arabia, which controls safety at the Muslim pilgrimage site, has acknowledged, according to a new, independent death count by The Associated Press.

The wire service’s count, based on state media reports and officials’ comments from 36 of more than 180 countries that sent citizens to the hajj, makes the Sept. 24 event the deadliest in the history of the annual pilgrimage known as the hajj. Hundreds more remain missing.

Saudi officials, who pledged to investigate the stampede, have issued an official count of 769 deaths, and its state-run Saudi Press Agency has made no mention of the investigation since Oct. 19, according to AP.

Management of the holiest sites in Islam is one of the chief responsibilities of the Saudi kingdom. King Salman, who carries the title of Custodian of the Two Holy Mosques, and Crown Prince Mohammad bin Naif, the kingdom’s interior minister and next in line to the throne, have overseen billions of dollars on crowd control at the annual pilgrimage, which draws millions of faithful Muslims.

Iran was most affected by the disaster, according to the AP count, with 464 Iranian pilgrims killed. Mali said it lost 305 people, while Nigeria lost 274 and 190 pilgrims from Egypt were killed.