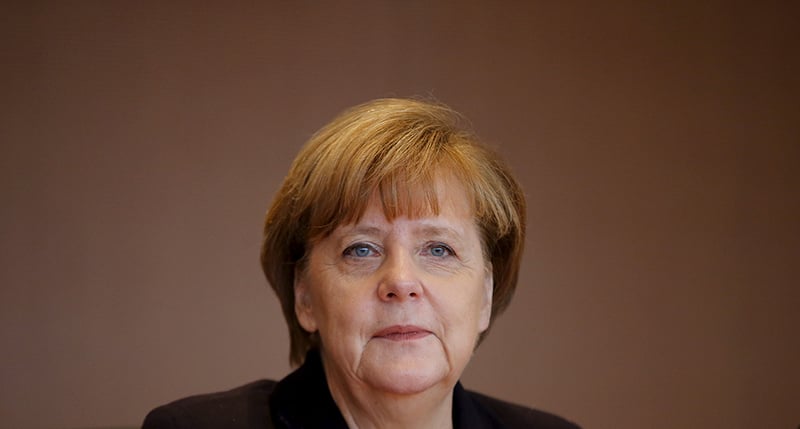 German Chancellor Angela Merkel attends the weekly Cabinet meeting at the Chancellery in Berlin on Dec. 1, 2015. Photo courtesy of REUTERS/Fabrizio Bensch
*Editors: This photo may only be republished with RNS-MERKEL-FAITH, originally transmitted on Dec. 10, 2015.

(RNS) Time magazine’s 2015 “Person of the Year” is a self-identified conservative Christian, but not one of the many running for president of the United States. While the dynamics of faith and politics are different in Europe, German leader Angela Merkel is an example of a conservative Christian living out her faith in the public square quite differently than we see in the U.S.

Time, which calls her “Chancellor of the Free World,”  characterizes her strong leadership of economic and political crises in Europe as “no flair, no flourishes, no charisma, just a survivor’s sharp sense of power and a scientist’s devotion to data.” She may be a quantum chemist, but she’s also an Evangelical Lutheran preacher’s kid with an unwavering faith.

The chancellor has described her personal faith in several interviews. “The structure of the world relating to belief is a framework for my life that I consider very important,” she said in one. “I believe in God, and religion is also my constant companion, and has been for the whole of my life,” she told a theology student during a video interview in 2012. She kept her faith mostly quiet up until that point, which is understandable given the rising secularization of Germany.

She has held firm to her socially conservative belief that marriage is the sacred union of one man and one woman. (She has also voted against abortion rights.) But unlike conservative Christians in America, she has strongly favored anti-discrimination legislation. “Wherever we still find discrimination, we will continue to dismantle it,” she told influential YouTube star Florian Mundt.

Merkel’s faith-based leadership stands in stark contrast to her Christian conservative cousins in the United States.

Her shift on social issues has upset the more extremist faction within her Christian Democratic Union party, according to the New Republic. She angered right-wing Catholics on issues such as gay rights, abortion, stem cell research and the family. And in the process, she “opened up the prim party to other kinds of conservatives, even ones who happened to be single mothers, gay, or from another country.”

But she wasn’t named Time’s Person of the Year for her stances on domestic social issues. She received the honor, according to Time editor Nancy Gibbs, because “Merkel brandished a different set of values — humanity, generosity, tolerance — to demonstrate how Germany’s great strength could be used to save, rather than destroy.” That’s been on display nowhere more than her advocacy for religious tolerance in light of terrorism and the Syrian refugee crisis.

Religious intolerance can’t be the overwhelming guide to public policy. “Fear was never a good adviser,” she said. “Cultures that are marked by fear will not conquer their future.”

And her stance is unequivocal. “Every exclusion of Muslims in Germany, every general suspicion is forbidden,” she said recently. “We will not let ourselves be divided.” That faith sets her apart from Christian conservative politicians in the United States, where fear dominates and the worst parts of the American psyche are stoked.

She has good advice for defensive and fearful Germans who are engaging this topic: Go back to church. She suggests that in light of the debate about Islam, people return to the “tradition of attending a church service now and then, and having some biblical foundations.” She says this debate “could lead us (to) deal again with our own roots and to know them better.” That’s good advice for American Christians as well. For Americans, both constitutional and Christian foundations call for religious freedom. Going back to church would, in no uncertain terms, undermine the calls for religious vetting of immigrants.

Time has named a conservative Christian as Person of the Year, perhaps just the type that the United States and the world needs.

(Guthrie Graves-Fitzsimmons writes about faith and public policy. From 2011 to 2015, he worked at the National Immigration Forum mobilizing Christians to advocate for the value of immigrants and immigration to America. Follow him at @guthriegf)