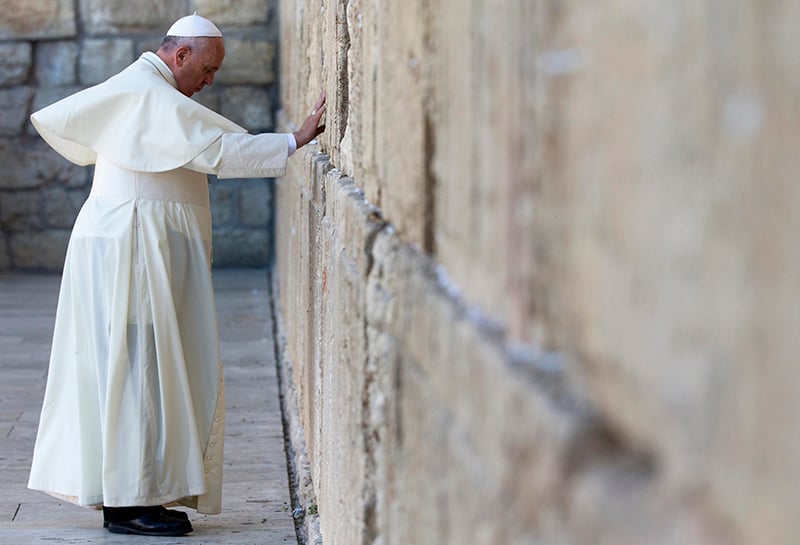 Pope Francis touches the stones of the Western Wall, Judaism’s holiest prayer site, in Jerusalem’s Old City on May 26, 2014. Photo courtesy of REUTERS/Andrew Medichini/Pool *Editors: This photo may only be republished with RNS-VATICAN-JEWS, originally transmitted on Dec. 10, 2015.

VATICAN CITY (RNS) The Vatican has said that Catholics should witness to their faith but not undertake organized efforts to convert Jews, a significant step forward in the once tense relations between the two faiths.

The document released on Thursday (Dec. 10) by the Vatican’s Commission for Religious Relations With the Jews also pushed for greater efforts to fight anti-Semitism.

In its most explicit commentary on evangelization regarding Jews, the document said Catholics should take a different approach to Judaism than to other religions.

“In concrete terms this means that the Catholic Church neither conducts nor supports any specific institutional mission work directed towards Jews,” said the document, titled “The Gifts and Calling of God are Irrevocable.”

The Vatican commission produced the new text to mark the 50th anniversary of a groundbreaking document on Catholic-Jewish relations, “Nostra Aetate,” in which the church formally rejected the notion that Jews were responsible for Jesus’ death.

Until reforms in the 1960s, prayers at Catholic Masses on Good Friday, the day commemorating the death of Jesus, described Jews as “perfidious” and called for their conversion — singling them out in ways that many historians and theologians say contributed to historic anti-Semitism and the persecution of Jews.

In the past half-century the Catholic Church has also downplayed the idea of targeting Jews for conversion and has rejected any form of proselytizing of any group.

But in response to requests from traditionalist Catholics, Francis’ predecessor, Pope Emeritus Benedict XVI, in 2008 allowed some Catholics to use the old prayer.

Though Benedict tweaked the prayer slightly to refer to “the blindness of that people” — meaning the Jews — instead of using more pejorative language, many Jewish groups still found that offensive and the controversy contributed to a sense of crisis in Catholic-Jewish relations.

The latest Vatican document appears to be another step toward easing those tensions, and it comes just a week after a group of Orthodox rabbis issued a groundbreaking statement calling Christianity part of a divine plan in which God would have Jews and Christians work together to redeem the world.

Similarly, the new Vatican document, which follows decades of mainly positive relations between the two religions, referred to the continued importance of “joint engagement throughout the world for justice, peace, conservation of creation, and reconciliation.”

“Peace in the Holy Land — lacking and constantly prayed for — plays a major role in dialogue between Jews and Christian,” it said. 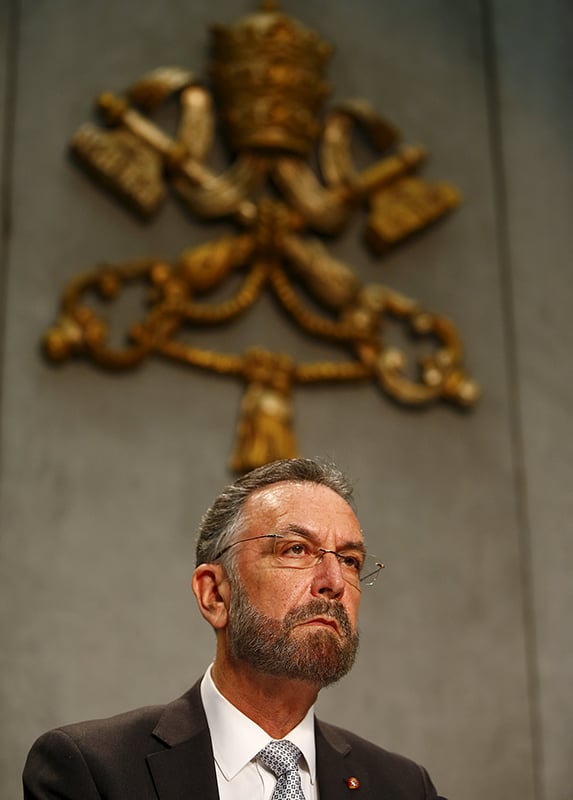 Rabbi David Rosen attends a news conference to present a major new document, that drew the Church further away from the strained relations of the past with Judaism, at the Vatican on December 10, 2015. Photo courtesy of REUTERS/Tony Gentile *Editors: This photo may only be republished with RNS-VATICAN-JEWS, originally transmitted on Dec. 10, 2015.

Vatican-Israeli ties were strained earlier this year when the Holy See signed a historic agreement recognizing the state of Palestine. “This hasty step damages the prospects for advancing a peace agreement, and harms the international effort to convince the PA (Palestinian Authority) to return to direct negotiations with Israel,” Israeli foreign ministry spokesman Emmanuel Nahshon said at the time.

While the new document touched upon Christian minorities, it also called on Jews and Catholics to jointly tackle anti-Semitism.

“History teaches us where even the slightest perceptible forms of anti-Semitism can lead: the human tragedy of the Shoah in which two-thirds of European Jewry were annihilated,” the document said, adding: “Pope Francis has repeatedly stressed that a Christian can never be an anti-Semite, especially because of the Jewish roots of Christianity.”

Speaking at the Vatican presentation of the document, Rabbi David Rosen, the American Jewish Committee’s international director of interreligious affairs, praised the text for advancing the recommendations made by Nostra Aetate.

“To appreciate and respect Jewish self-understanding; but also a deepening recognition of the place of Torah in the life of the Jewish people; and … an acknowledgment of the integrity of Jewish reading of the Bible that is different from the Christian one,” he said.

The document describes the Torah as “the instruction for a successful life in right relationship with God.”

Rosen, however, criticized the authors of the document for failing to “appreciate the centrality that the land of Israel plays in the historic and contemporary religious life of the Jewish people.”

Catholic-Jewish relations are expected to be further strengthened early next year, when Francis visits Rome’s Great Synagogue on Jan. 17.

He will be the third pontiff to visit the site, after John Paul II and Benedict XVI, in what has been described by the Vatican as a personal encounter between the pontiff and the Jewish community.