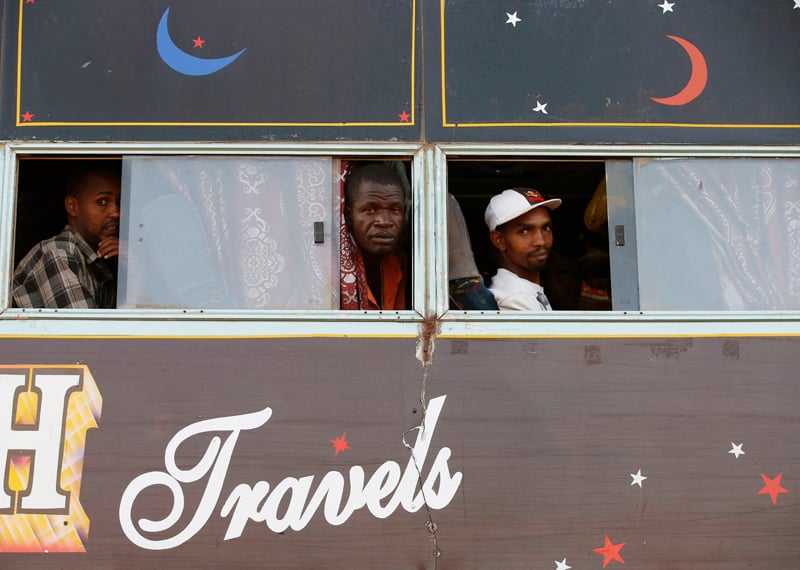 Men look out the windows of a bus as it travels to Nairobi, in Mandera town at the Kenya-Somalia border, on Dec. 6, 2014. Photo courtesy of REUTERS/Goran Tomasevic
*Editors: This photo may only be republished with RNS-KENYA-MUSLIMS, originally transmitted on Dec. 22, 2015.

NAIROBI, Kenya (RNS) Christian leaders have hailed as an act of bravery and selflessness the shielding of some Christians by Muslims after suspected al-Shabab gunmen in Mandera County ambushed a passenger bus.

The gunmen sprayed the bus with bullets, killing two. But when they asked the 62 Muslim passengers to help identify the Christian passengers, the Muslims refused and told the militants to kill everyone or leave.

Defeated, the militants left hurriedly, according to witnesses.

The gesture has since united Christians and Muslims in the county, which lies in the country’s north along the border with Somalia.

“I think it’s an act of bravery for the Muslims who risked their lives to protect the Christians,” said Anglican Bishop Julius Kalu of Mombasa. “This is the true meaning of religion, and we congratulate them.”

Kalu said true religion protects neighbors and defends the weak and the poor. He attributed the development to the recent campaigns around peaceful religious coexistence.

Roman Catholic Bishop Joseph Alessandro of Garissa said it was a very positive gesture from the Muslims.

“It shows that even the local Muslims do not support the Islamists’ violence,” said Alessandro. “Now al-Shabab knows they have no support.”

Ali Roba, Mandera’s county governor, praised the Muslims’ reaction and said some were injured when they refused to be separated from the Christians.

“We have often stressed that we don’t support the militants. We have insisted we have no problem with our Christian brothers. This confirms it,” said Salat.

Al-Shabab has launched a series of attacks in Kenya since 2011, when the country’s army entered Somalia to fight the militants. In 2013, the group attacked the Westgate shopping mall in Nairobi, killing 67.

At least 48 people were killed in Mpeketoni in 2014 after militants attacked villages and a town center. Later that year, the militants killed 28 people, mainly Christian teachers traveling on a bus in Mandera County. Weeks later, the group killed 36 non-Muslim quarry workers.

But the biggest attack was in April 2015, when group massacred 148 mostly Christian students at Garissa University College.