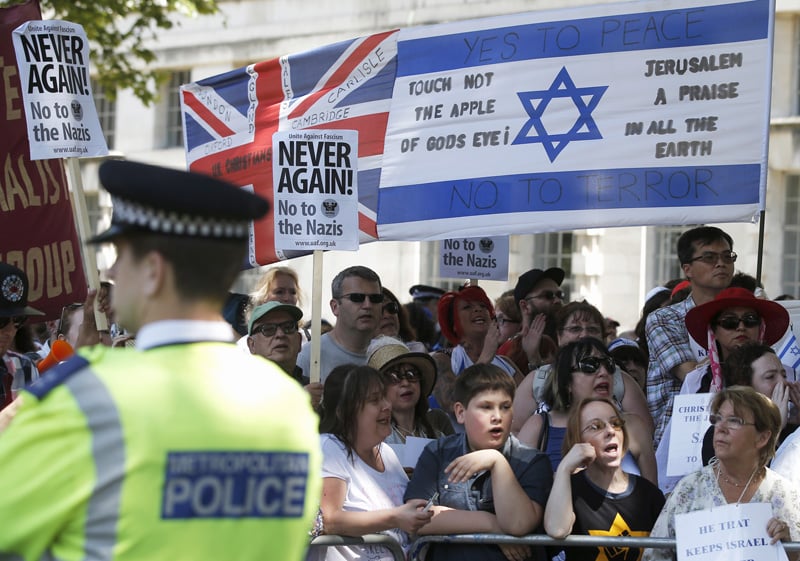 People of multiple faiths hold a counterprotest to an anti-Shomrim protest that was held to demonstrate against Britain’s Jewish community in Westminster, London, on July 4, 2015. Photo courtesy of REUTERS/Peter Nicholls
*Editors: This photo may only be republished with RNS-LONDON-HATE, originally transmitted on Dec. 30, 2015.

CANTERBURY, England (RNS) Attacks on Jews and Muslims in London, including assault and harassment, have soared by more than 60 percent over the past year, police statistics show.

The Metropolitan Police dealt with 483 anti-Jewish incidents in the 12 months between November 2014 and November 2015, marking a 62 percent increase over the same period last year.

The city’s police recorded a similar rise in anti-Muslim incidents, increasing by 64 percent over last year, for a total of 818 such attacks.

The rise in attacks on Muslims followed the terrorist strikes that killed 130 people in Paris last month, with police acknowledging that “world events” fuel an increase in religious intolerance and spark anti-Jewish or anti-Muslim hate crimes. The Metropolitan Police said that before the week of the Paris attack on Nov. 13, there had been 24 Islamophobic incidents in London. Two weeks later there were 76.

But the higher figures may also be a sign that Britain’s 280,000 Jews and estimated 2.7 million Muslims are more willing to report hate crime violations to the police.

Moshe Kantor, president of the European Jewish Congress, told The Times of London that “much more must be done to tackle the rise in anti-Semitic hate in London.”

Miqdaad Versi, assistant secretary-general of the Muslim Council of Britain, said: ”As a whole, British society is tolerant of other faiths and cultures. But these figures are concerning.”

Both religious communities have called on victims of religious and race hate attacks to report such incidents to the police.