Cincinnati Bengals wide receiver A.J. Green (18) is brought down by Denver Broncos cornerback Chris Harris (25) and defensive back Josh Bush (20) during the first half at Sports Authority Field at Mile High on Dec. 28, 2015. Photo courtesy of Chris Humphreys-USA TODAY Sports via Reuters.
*Editors: This photo may only be republished with RNS-CAMOSY-COLUMN, originally transmitted on Dec. 30, 2015.

(RNS) Imagine a major motion picture about NFL football, featuring Will Smith as the superstar lead actor, which got solid reviews. How do you think its opening weekend would go in our football-obsessed culture?

Just such a movie, “Concussion,” opened on Christmas Day and finished the weekend in an embarrassing sixth place — behind a terrible Alvin and the Chipmunks film.

Americans are addicted to football — especially this time of year — and we simply don’t want to be confronted with the results of the violence inherent in the game. 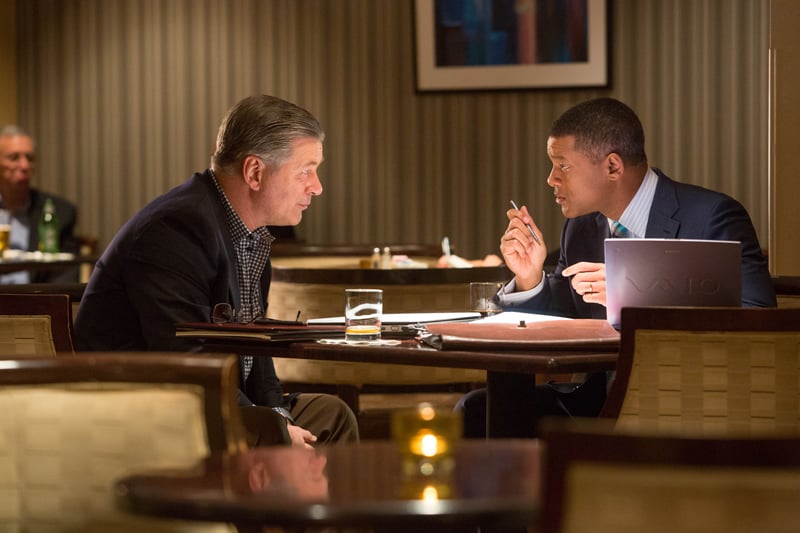 But no fan can watch “Concussion” without being so confronted. Smith plays Dr. Bennet Omalu, a man who heroically challenged the NFL juggernaut and forced it to admit that the game was causing serious brain damage to many of its players. His medical breakthrough came with examining the brain of the great Pittsburgh Steeler Mike Webster — who died at age 50, living in a van, regularly firing a Taser on himself to deal with the pain.

Since then, we’ve come to know the stories of many others who have been affected by football concussions. Brett Favre cannot remember his daughter’s childhood and has publicly said that he would not permit any child of his to play football. Dave Duerson and Junior Seau had brain injuries that led to them taking their own lives. Super Bowl-winning quarterback Jim McMahon said of his struggles: “I am glad I don’t have any weapons in my house or else I am pretty sure I wouldn’t be here. It got to be that bad.”

Even if one’s life is not in immediate jeopardy, plenty of NFL players can relate to Super Bowl winner Leonard Marshall, who said, “I just noticed that my behavior was starting to change. … I would forget things, forget financial responsibilities, take things for granted, have a short fuse with my daughter, a short fuse with my ex.”

The NFL, under severe legal and social pressure in recent years, has taken some steps to address the problem, adding new penalties for “targeting” the head of an opposing player and putting protocols in place for those who suffer head injuries. But as “Concussion” director Pete Landesman rightly notes, “there’s a very limited range of things they can actually do” with the game as it currently exists.

I take a back seat to no one when it comes to love of football. The game has been a very important source of community for my friends and family. (Indeed, because my parents met on a train going to see Notre Dame play Alabama for the 1973 national championship, I literally wouldn’t exist if it weren’t for football.) Left unrestrained, I could easily watch five, six games in a typical weekend. Football is an intoxicating combination of ridiculous athletic talent, the complexity of a grand master chess match, and raw caveman force.

Growing up a football fan in Wisconsin during the 1990s, I was obsessed with the rise of the Green Bay Packers’ Mike Holmgren, a coach who pulled no punches in connecting the sport to violence. “Football is about physically pounding the opponent. If you want to win this game, you have to beat the crap out of these guys,” he said.

As much as I love to try to recognize a zone blitz, or am awed by a wide receiver laying out for a diving touchdown reception, I have to admit there is a primal part of me that loves the violence. I’m not proud of it, but a blind-side hit on the opponent’s quarterback, or a ball-hawking safety taking out an opponent’s wide receiver as he comes over the middle, gives me a thrill.

But it is precisely this aspect of the game that is so morally problematic. As long as we continue to support a game deeply connected to violence, each of us is implicated in the terrible toll this is taking on football players in their retirement.

The game has changed its relationship to violence before. In 1905, 18 players died from their football injuries. In response, President Teddy Roosevelt summoned coaches and athletic directors to the White House with the goal of “reducing the element of brutality in play.”

Football must again fundamentally change its relationship with violence. Though such changes will likely cause short-term growing pains and complaints from the fans, the wild popularity of fantasy football, which focuses on things like touchdowns, yards, receptions and interceptions, indicates football would still flourish without the violence.

But this will not happen without pressure from the fans. We must make our desire for change loud and clear. And, yes, we should refuse to watch and otherwise support the game as it currently exists.

Perhaps this should be the final weekend we watch football until it fundamentally changes its relationship with violence.

News
For California Muslims: A Ramadan approaching normal
Follow us on Facebook!
Submit your photos to RNS