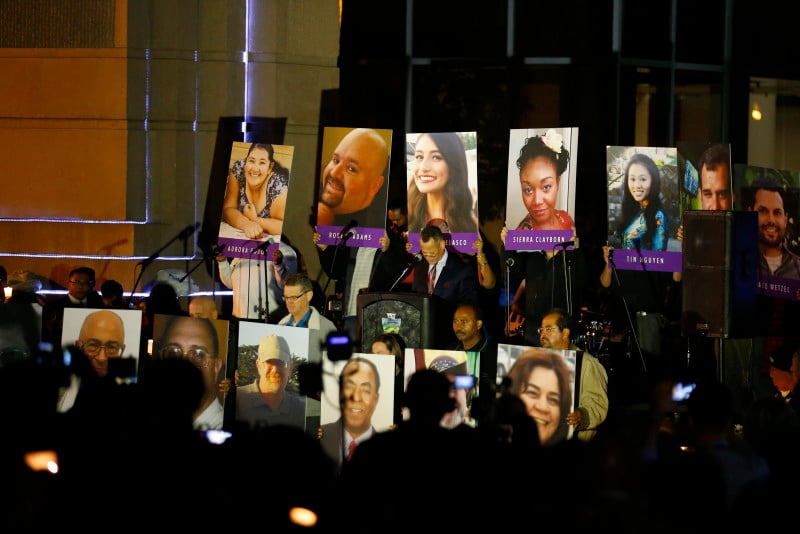 People hold photos of the mass shooting victims during a moment of silence at a vigil in San Bernardino, Calif., on Dec. 7, 2015. Photo by Mike Blake, courtesy of REUTERS *Editors: This photo may only be republished with RNS-TERROR-REPORTk, originally transmitted on Feb. 2, 2016.

(RNS) The number of Muslim Americans involved in terrorism cases “rose dramatically” in 2015, although the overall threat they posed to public safety has been exaggerated, says the author of a new terrorism study.

“The demonization of Muslim Americans in some American social and political spheres has created a hostile climate far out of scale with the actual number of Muslim Americans involved in violence,” said University of North Carolina sociologist Charles Kurzman, author of the report released Tuesday (Feb. 2).

Even so, attacks and disrupted plots by Muslim Americans in 2015 more than doubled over 2014, according to the report, published by the Triangle Center on Terrorism and Homeland Security.

Kurzman’s seventh annual look at the numbers found that 81 Muslim Americans were associated with violent extremist plots in 2015, the highest annual total since 9/11.

This brought the total number of Muslim Americans involved in violent extremism since the attacks on the Twin Towers and the Pentagon to 344, an average of 26 per year. The total number of U.S. terrorism-related fatalities that resulted in the same period was 69.

To put that in perspective, Kurzman said, a total of more than 220,000 Americans have been murdered since 9/11 — including 134 in mass shootings.

“Each year since 2010 when I began doing this report, I try to remind readers … that among the threats to public safety that Americans face year in and year out, Islamic terrorism has played a very small role,” Kurzman said in an interview. 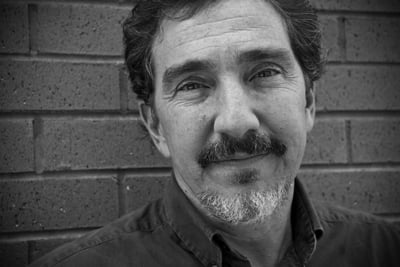 Charles Kurzman, author of “The Missing Martyrs: Why There Are So Few Muslim Terrorists.”

“Even the numbers of disrupted plots remain much lower than the public debate would lead us to believe. And yet it remains the focus of so much of the security discourse in American politics.”

All 19 of last year’s fatalities occurred in attacks carried out by three people.

A Muslim American gunman killed five military personnel in a shooting attack in Chattanooga, Tenn., in July, and a Muslim American man and his immigrant wife killed 14 people at an office Christmas party in San Bernardino, Calif., in December.

“A handful of individuals can affect perceptions and hide overall trends,” said Kurzman, a specialist on Islamic movements and author of “The Missing Martyrs: Why There Are So Few Muslim Terrorists.” 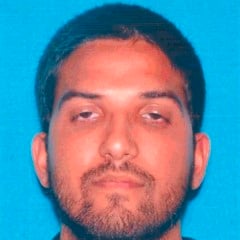 Syed Rizwan Farook is pictured on his California driver’s license. Farook was one of the alleged shooters in the California rampage that left 14 dead. Photo by California Department of Motor Vehicles via Reuters

The report came out just days after a Republican race in Iowa where candidates competed to express the most hard-line views on combating terrorism.

In his detailed look at perpetrators and suspects in 2015, Kurzman found that 28 of them were associated with plots against targets in the United States.

Of the 41 Muslim Americans known to have joined the Islamic State group since 2011, nearly half (20) have died, 16 men and women are alive in ISIS territory, and five were arrested on return to the U.S., including one accused of planning an attack here.

Kurzman said the actual numbers could be higher. He cites research by J.M. Berger that “suggests that the ‘Islamic State’ may be keeping some of its American fighters ‘on the down-low,’ in order to ‘conserve their Americans for when they need to make a big splash.’”

The report also found that Muslim Americans involved in terrorism in 2015 were: