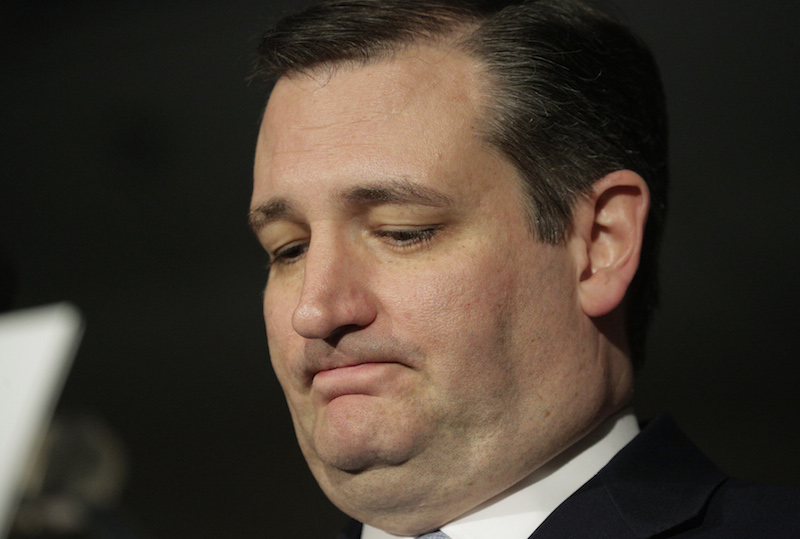 Republican presidential candidate Ted Cruz speaks to supporters after finishing third in the South Carolina primary behind Donald Trump and Sen. Marco Rubio. REUTERS/Joshua Roberts *Editors: This photo may only be republished with RNS-CRUZ-FIRE, originally transmitted on Feb. 23, 2016.

LAS VEGAS — Sen. Ted Cruz said he has asked his communications director to resign after spreading a false story on social media about Sen. Marco Rubio.

“Our campaign should not have sent it,” Cruz said Monday (Feb. 22) before speaking with supporters at a neighborhood YMCA in Las Vegas. “That’s why I’ve asked for Rick Tyler’s resignation.”

Tyler, who has been one of Cruz’s most prominent spokesmen, had posted an item on Facebook that included a video inaccurately claiming that Rubio had mocked the Bible during a chance meeting with Cruz’s father and an aide in South Carolina. Videotape showed Rubio actually praising the Bible. Tyler later apologized for the incident.

Cruz, whose Republican presidential campaign has been accused of dirty tricks, said Tyler is a “good man,” but he has made clear that “we will conduct this campaign with the very highest standards and integrity.”

“The story mentioned by Tyler was about a video that shows Rubio walking into a hotel lobby past Cruz’s father Rafael and a staffer reading the Bible, and subtitles in the video misquote Rubio as saying, ‘Got a good book there, not many answers in it.’

In a corrected version of the video tweeted by Rubio’s communications director, Alex Conant, the subtitles quote Rubio saying, ‘Got a good book there, all the answers are in there.'”

In a statement, rather than lay blame on Tyler, the Rubio campaign attributed the incident to a campaign culture fostered by Cruz.

“Rick is a really good spokesman who had the unenviable task of working for a candidate willing to do or say anything to get elected,” Conant said. “There is a culture in the Cruz campaign, from top to bottom, that no lie is too big and no trick too dirty. Rick did the right thing by apologizing to Marco. It’s high time for Ted Cruz to do the right thing and stop the lies.”

Rival Donald Trump also wasted no time after the staff announcement was made, tweeting that the Rubio flap amounted to “more dirty tricks” from the Cruz campaign.

The latest controversy follows an uproar that began the night of the Iowa caucuses after the Cruz campaign disseminated an incorrect report that Ben Carson planned to drop out of the Republican race. Cruz later apologized to Carson.
(David Jackson writes for USA Today)
Share
Tweet
Share
Posted in
Arts & CultureEthicsPolitics