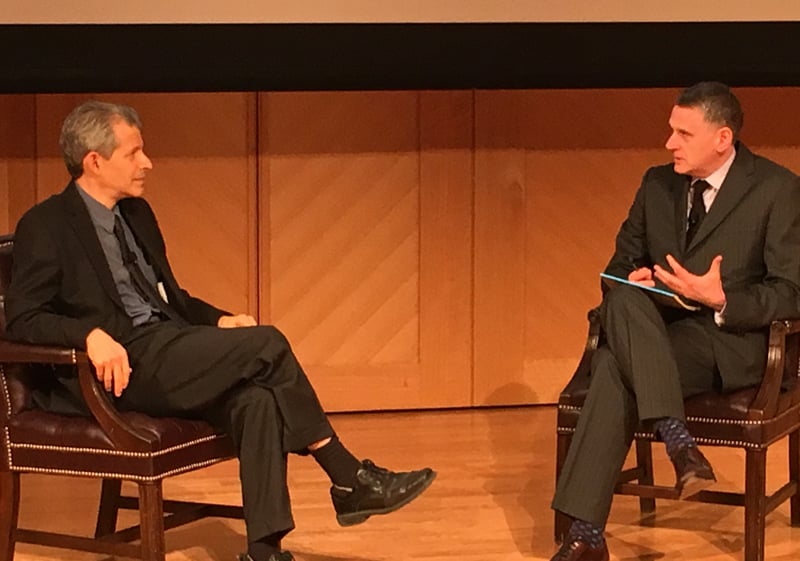 WASHINGTON (RNS) The paragraph, read out loud by one of the world’s foremost scholars of the Holocaust, chilled the audience.

“Contaminated by the monstrous and rooted ‘certitude’ that in this catastrophic and absurd world there exists a people chosen by God … the Jews endlessly scratch their own wound to keep it bleeding, to make it incurable, and they show it to the world as if it were a banner,” read Daniel Jonah Goldhagen, at a Georgetown University conference Monday (Feb. 29) on anti-Semitism in Europe.

“Israel seizes hold of the terrible words of God in Deuteronomy: ‘Vengeance is mine, and I will be repaid,'” he continued. “Israel in short is a racist state by virtue of Judaism’s monstrous doctrines, racist not just against the Palestinians but against the entire world.”

This diatribe against the Jews, printed in one of Europe’s leading mainstream newspapers, came before the most recent spike in anti-Semitism across the continent, the subject of the daylong conference sponsored by Georgetown University’s new Center for Jewish Civilization.

Goldhagen, a former Harvard University professor, put the subject of the conference in a global context, contrasting the unlikelihood of another Holocaust in Europe to the frequent calls to violence against Jews in Arab lands. He calls anti-Semitism “the devil that never dies” — it morphs over the millennia, taking different forms in different cultures. One of anti-Semitism’s consistent traits, he said, is the idea that the world’s Jews — 0.2 percent of the world’s population — represent an evil threat.

And one of the most astonishing things about anti-Semitism throughout history, Goldhagen continued, is that it is deeply rooted in countries where Jews do not live.

But Jews do live in Europe — though a fraction of the 13 million Jews worldwide. And speakers at the conference from France, the Netherlands and Sweden spoke of increasing threats to Jews on the continent where one-third of the world’s Jewish population was murdered during the Holocaust. Right- and left-wing radicals traffic in anti-Semitic stereotypes, they said. But the recent spike in violent crimes against Jews comes mostly at the hands of radical Islamists. In the past few years, they have gunned down and stabbed to death Jews in museums, synagogues, kosher supermarkets and Jewish schools.

The situation has become dire enough for a Jewish leader in France — which has both Europe’s largest Jewish (450,000) and Muslim (5 million to 6 million) populations — to recommend that Jewish men avoid wearing a kippah, or the skullcap that denotes reverence to God, while out in public. Statistics show that 49 percent of the violent racist crimes in France in 2015 targeted Jews, who represent 1 percent of the population, and that this violence has pushed many French Jews, whose roots in the nation go back more than 1,500 years, to move to Israel. According to The Times of Israel, more than 6,000 French Jews resettled in Israel in 2015. Benjamin Haddad, a French expert on trans-Atlantic affairs who spoke at the conference on anti-Semitism in France, said he sympathizes with French Jews who felt so unsafe that they moved to Israel. But he also chided those who encouraged this migration. Religion News Service photo by Lauren Markoe

Benjamin Haddad, a French expert on  trans-Atlantic affairs who spoke at the conference on anti-Semitism in France, said he sympathizes with French Jews who feel so unsafe that they move to Israel. But he also chided those who encouraged this migration.

“Calling on French Jews to leave is also saying basically that French society, that the French are not able to defend a liberal democracy in the long term,” Haddad said. It’s important to stay optimistic about the future of French Jews because “it’s a test basically for the future of our civilization.”

The conference, “Understanding Contemporary European Anti-Semitism,” was one of the first events sponsored by Georgetown’s new Jewish center, which opened last month as part of the university’s School of Foreign Service. The Jesuit University enjoys a long-standing reputation as one of the leading places in the world to study Arab history, politics and culture, and leaders in Arab nations have decades-long relationships with the university, helping to fund its Center for Contemporary Arab Studies and Center for Muslim-Christian Understanding.

Professor Jacques Berlinerblau, the first director of the university’s Center for Jewish Civilization — which is supported by a $20 million endowment — said it fills a need at Georgetown.

The new Jewish center is also a marker in Catholic-Jewish relations and reforms within the Roman Catholic Church during the last half-century, Berlinerblau said.

“It really is of tremendous, symbolic import, that a Jesuit University in Washington, D.C., has a full-blown, permanently endowed center for Jewish civilization,” he said. “You could draw a direct line between Vatican II and this moment.”