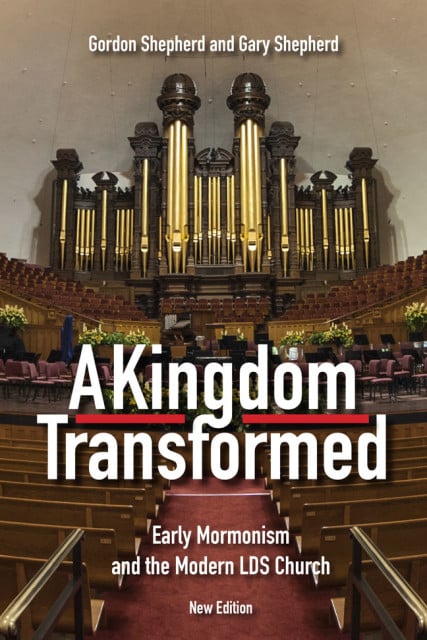 With LDS General Conference coming up, there’s always lots of speculation about what topics the prophets, apostles, and auxiliary leaders will cover. Two sociologists take a long view – a really long view, as in all of LDS church history – and point to what we can learn about how Mormonism changes over time by crunching the numbers of what gets talked about at General Conference.

So let’s take a look at some highlights from the new 2016 edition of A Kingdom Transformed: Early Mormonism and the Modern LDS Church, which was first published in 1984 but has now been updated to include all Conference talks up through 2009.  (You can buy it here from Amazon.)

I spoke with the authors, identical twin brothers Gordon and Gary Shepherd, who are professors of sociology at different universities but have collaborated on many research projects together.

RNS: What pops out in your tables is the growing importance of Jesus Christ as a conference topic, whereas in the earliest decades he didn’t even crack the top ten.

Gordon: Also, it’s not just in the last 30 years that Jesus Christ has become an ascendant conference topic. We saw that in our earlier analysis that by the 1970s it was already clear that there had been a shift in emphasis on Jesus Christ as the head of the church. We see this as a reflection of the accommodation that the Church was going through, fitting in more comfortably with Christian denominations in American society, and emphasizing that Mormonism really is a Christian tradition and not a cult. 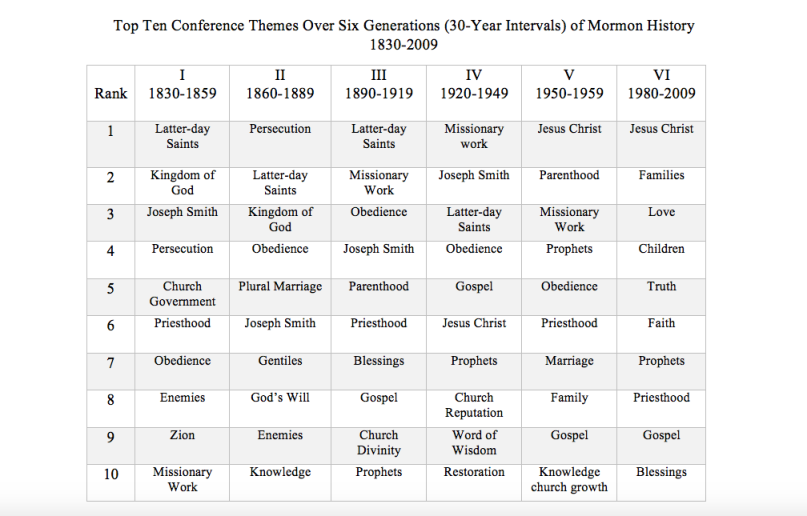 RNS: Another thing that shows up in recent years is the importance of marriage, family, and children. How does that compare to previous generations?

Gary: The topic of parenthood and responsibilities did not emerge among the top themes until the third generation, according to our measure – 1890 to 1919. Prior to that, it wasn’t a topic discussed with any great degree of emphasis at all. But in the late twentieth century, 1950 to 1979, parenthood and marriage and family – all three – were among the top three for the first time.

RNS: Why this new focus?

Gordon: The message is that the LDS Church sponsors the same kind of family and marriage that at least in the mid-twentieth century was the national ideal. Mormons promote the idea that these family values are what is most characteristic about Latter-day Saints. Which in more recent decades has dovetailed with conservative Christianity.

Gary: Even people who don’t hold the LDS Church in high esteem for religious reasons will typically comment on the great appeal of Mormonism being its emphasis on families. So that message has obviously come out of the LDS Church and rebounded very advantageously for the Church’s reputation.

RNS: So those topics are now discussed frequently in conference. What about the opposite: themes that used to be important and are no longer getting much play?

Gary: What we call “utopian” themes are not mentioned anymore with any frequency whatsoever, such as persecution, Zion, enemies, or Gentiles. All of these terms that connote an “us versus them” contrast are gone.

Gordon: This idea of Zion of course has changed. In the nineteenth century it meant the gathering. Mormon missionaries were supposed to be going out and bringing people back to Zion, with definite millennial expectations involved. But now, when General Authorities reference Zion, there’s no emphasis at all on a gathering, and very little on an imminent end of the world. The reorganized concept of Zion does not refer to a particular place, but to a global network of church members who are united in their faith and their beliefs.

RNS: You mentioned a disappearance of talk of the end times, but we do still hear about that now and then.

Gary: Although occasionally a General Authority might comment specifically on themes related to the end times, these are idiosyncratic instances. Given the entire body of conference addresses over a designated period of time, they simply don’t show up anymore. It’s only themes that are referenced constantly and by many leaders that would begin to register in our data.

Gordon: Why has this become less and less frequent? With the passage of enough time, any religious community that in the past has put an emphasis on the end times is going to have to adjust their theology. You can’t keep talking about it as though it’s going to happen tomorrow when you said that fifty years ago. Another thing is that the LDS Church is at the present time very much concerned with its members being actively involved in carrying out all the programs that constitute what it means now to be a Latter-day Saint. There’s a more focused concentration on the programs of the church, not the end of the world.

RNS: You also point out something that surprised me, that the Book of Mormon has only appeared among the top twenty topics in a single decade in all of church history [the 1980s]. And even then it barely squeaked onto the list.

Gordon: The Book of Mormon as a specific conference topic correlated very closely with the presidency of Ezra Taft Benson. He personally crusaded for emphasizing it in every way he could think of, and after his presidency was over it just dropped out.

Gary: And throughout the nineteenth century, there’s very little mention of the Book of Mormon. Both Gordon and I found it very interesting that Joseph Smith himself virtually never referred to the Book of Mormon after it was published. It didn’t emerge as a topic of interest in his speeches or writings, nor those of his associates in the earliest times of Mormon history.

Gordon: We interpret that by saying that the Church is concerned about how it is perceived by others who are not LDS. They want to reinforce the idea that Mormonism is a staunch Christian religion, and the Book of Mormon doesn’t support that with critics. It’s a scripture that they don’t recognize as genuine or valid.

This is part of the overall de-emphasis of certain kinds of teachings and doctrines that are peculiar to Mormonism. There’s been a decline in mentioning specifically Mormon ideas of salvation, like exaltation and the Celestial Kingdom. Those are core Mormon theological beliefs, but they don’t get referenced very often at General Conference, especially in the last 30 years.

Gary: When these kinds of concerns are discussed at General Conference, the unique Mormon vocabulary is not employed. They’ll say “heaven” instead of “the Celestial Kingdom,” and “salvation” instead of “exaltation.” Mormon audiences will make a translation in their minds about what that really refers to, but at General Conference that’s not the vocabulary that is employed by General Authorities.