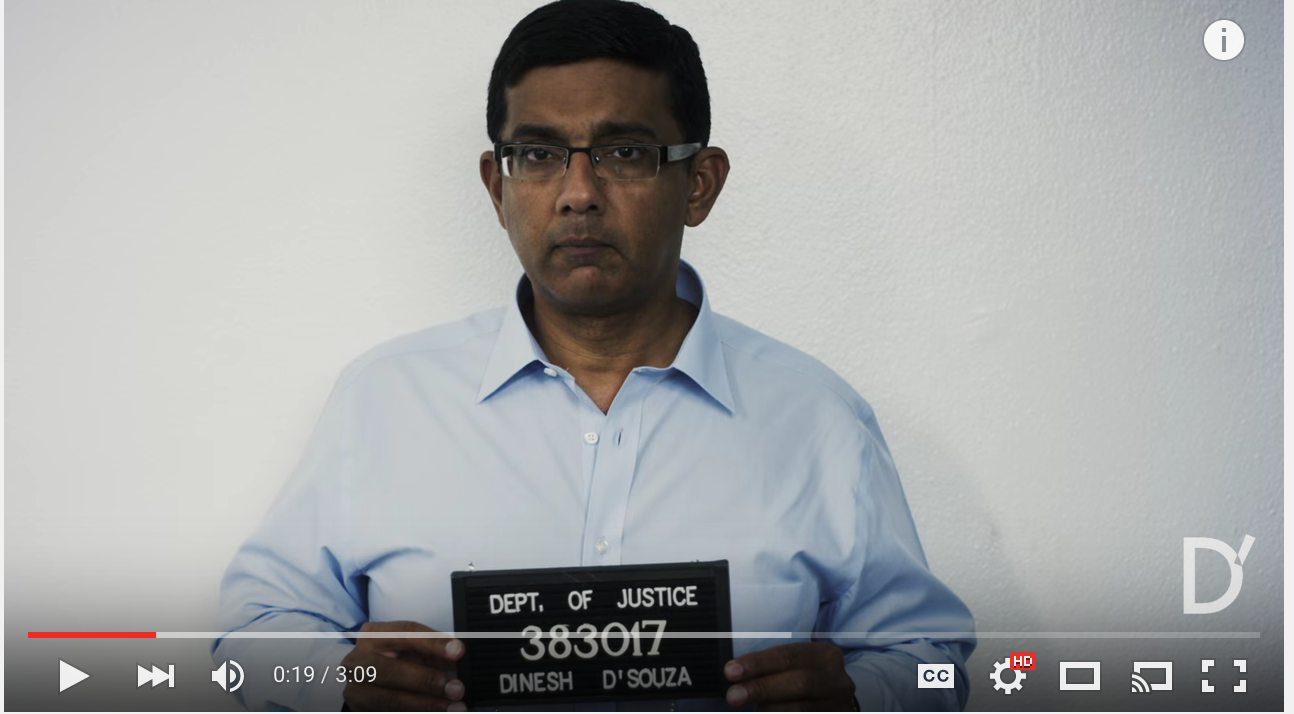 Who are these Democrats? It's a question convicted felon Dinesh D'Souza has presumably been asking for a long time, and it appears that he still doesn't know the answer. Likely upset that Donald Trump has, of late, stolen some of his thunder, D'Souza released the trailer yesterday for his new film, Hillary's America: The Secret History of the Democratic Party. You can watch it here:

The trailer puts D'Souza in the middle of a True Detective-like hunt for ...the soul of the Democratic Party? The Truth? His innocence? It's hard to tell. It opens with stirring images of men in red capes riding white horses, a rally for famously corrupt Chicago mayor Richard J. Daley, and D'Souza himself staring at a wall of images connected with string, like Carrie made when she was hunting Brody in Homeland. You know, before the affair.

Pounding drumbeats and loud synthesizers play behind vignettes of a light flickering in a parking garage, a person silhouetted against the window of the Oval Office, Dinesh D'Souza recreating his mugshot? I would think you wouldn't want to remind your audience that you are a convicted felon, but in this case D'Souza is relying on a very particular narrative: "It all began when the Obama administration tried to shut me up," he intones while the viewer watches an artfully-shot prison fight.

"What did I learn?" D' Souza asks. "All crime is about stealing. The big criminals are still at large," we hear, as Hillary Clinton's testimony about her email controversy plays on a small screen. Keeping in mind that D'Souza has built a career on uninformed punditry and feigned ignorance, you might think that this was pretty damn low of him. You would be right, but like a horse turd at the bottom of a lake, he sinks lower still. 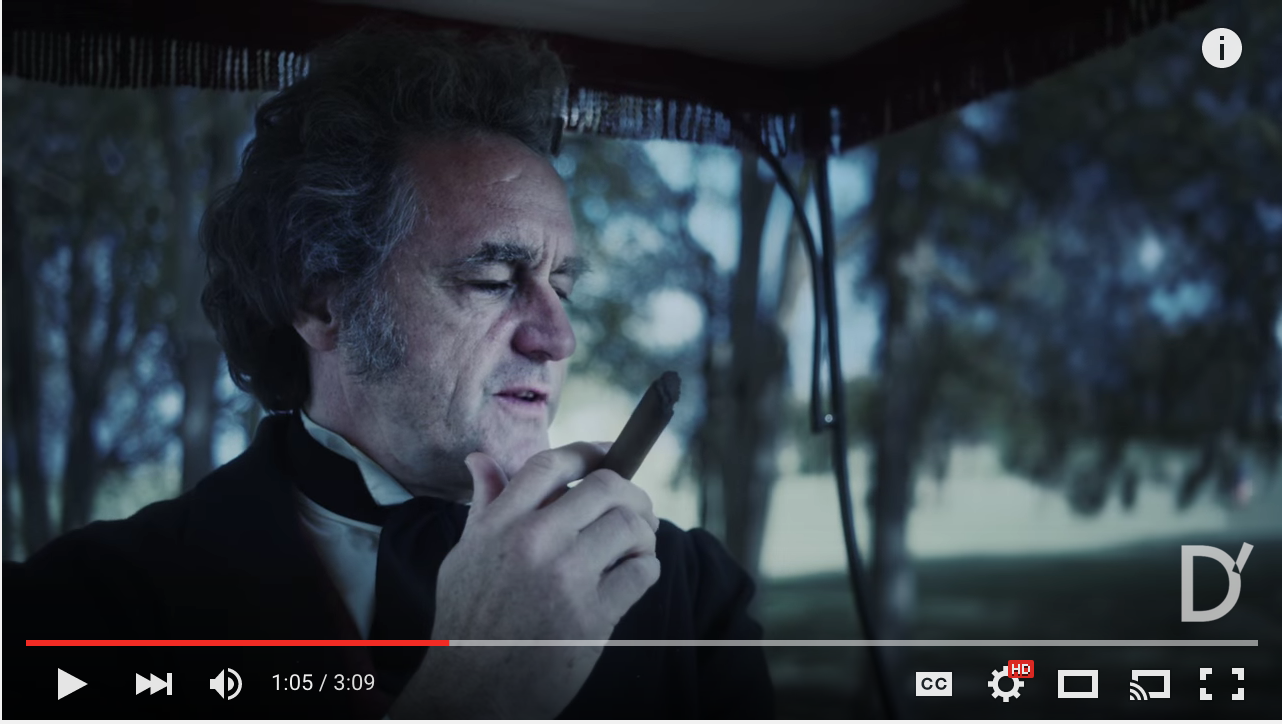 That's right: Dinesh D'Souza made a civil war reenactment video to prove that the Democratic party is corrupt because Andrew Jackson was a smarmy slave-owner and because some Democrats supported slavery. "Why has all this been swept under the rug?"  "To cover the tracks of the Democratic party."

What group of people regularly creates their own ridiculous argument and gives an equally ridiculous answer? Children. I once argued with my mom at the Jewel-Osco to get her to buy Pop Tarts because they seemed so delicious (frosting for breakfast!). The next morning I realized I couldn't stomach more than one bite, so I took the Pop Tart with me INTO THE BATHROOM because, I told my mom, it was so good I didn't want to be without it while I peed. Then I crumbled it into tiny pieces and flushed it down the toilet. Dinesh D'Souza is 10 year-old me and this video is his Pop-Tart. Except it's not his first Pop-Tart. There was Obama's America. There was The Roots of Obama's Rage. There was America: Imagine the World Without Her, a book whose cover featured a giant tidal wave overtaking the Statue of Liberty in a scene that looked like it was ripped straight out of Deep Impact.

Dinesh D'Souza traffics in fear. The crazy thing is, there is enough scary stuff going on in the world that a person could make an honest living out of fearmongering--but D'Souza's particular agenda requires him to create paper ghosts to haunt an already-terrified public. No one is covering the tracks of the Democratic Party. We hardly ever talk about how Andrew Jackson killed a man in a duel for his wife's honor, but that's because it is a matter that isn't particularly relevant for the political climate we're in today, not because we are trying to cover it up. Jackson and many Democrats have done terrible, reprehensible, unspeakable things. The history of Jackson's slave ownership, of Democratic corruption, of Tammany Hall--it's all there, in textbooks. I learned about all of it in AP U.S. History, in my public school.

I am tempted to never take Dinesh D'Souza seriously. The man hawked his friend's fake Christmas tree, for God's sake. I am also tempted never to take Donald Trump seriously, but that has proved to be naive.

"What if the goal of the Democratic party is to steal the most valuable thing the world has ever produced?" D'Souza asks (are you following how he asks inane and despicable open-ended questions to imply that his version of the truth is likely?). The camera zooms out and we are looking at America. "What if their plan is to steal America?" Camera zooms in, first to D'Souza's skeptical face and then to a Dear Leader-style image of Hillary Clinton speaking in front of a giant portrait of her own face -- an image that D'Souza's team at D'Souza media cobbled together. It's an enormous straw woman of D'Souza's making. And only one person in this whole video -- I'll let you guess who -- has actually been convicted of stealing anything. It's not Hillary.

September 21, 2020
Related Posts
By Alejandra Molina
In Oregon, churches and anti-fascists unite to provide mutual aid to fire evacuees and others in need
By Alejandra Molina
John MacArthur believes the Bible trumps COVID-19 public health orders. Legal scholars say no
By Bob Smietana, Alejandra Molina
Death of megachurch pastor Darrin Patrick officially ruled a suicide
By Alejandra Molina
Four young people of different faiths move into a home together, then a pandemic happens
By Jeffrey Salkin
Warning: Your piety might be dangerous to your health