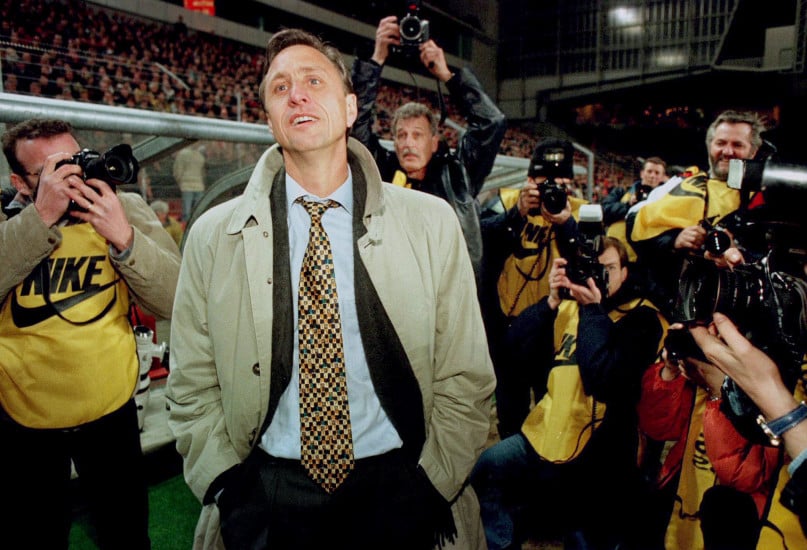 Barcelona Dutch coach Johan Cruyff looks on as he is surrounded by photographers after his team, FC Barcelona, won a European tournament match. Photo courtesy of Reuters

(RNS) He was nicknamed “The Savior,” compared to Jesus and considered “God’s gift to football.”

Johan Cruyff, the Dutch soccer star considered a genius of the game and one of the world’s all-time best players, died Thursday (March 24) at age 68 after a battle with lung cancer.

Cruyff helped Ajax Amsterdam win three consecutive European Cups in the 1970s and the Dutch national team make it to the final of the 1974 World Cup. He later played for and coached FC Barcelona in Spain.

Part of Cruyff’s mythical status came from his ability to see opportunities on the field that normal mortals couldn’t. But he was also known for his down-to-earth attitude and blunt pronouncements. He once criticized the practices of devoutly Catholic Spanish players.

“In Spain, all 22 players make the sign of the cross before they go on the field. If it works, all matches must therefore end in a draw,” he said, describing himself as “not religious.”

That widely quoted statement earned him a place on lists of the world’s top atheist athletes.

But in the ’90s, Cruyff told the Dutch Catholic radio station RKK/KRO that as a child he attended Sunday school, where he was taught about the Bible, and that while he didn’t go to church as an adult, he believed “there’s something there.”

“People don’t know the real Johan Cruyff,” Derksen said. “I have on occasion had beautiful conversations with him about faith, because we both went to the same kind of schools and learned about the Bible. And it stays with you.”

(Jerome Socolovsky is editor-in-chief of RNS)