ROME (RNS) An artist who converted an abandoned church in Spain into an indoor skateboarding park is defending the project against critics who consider it an act of desecration.

The Santa Barbara church in the northern Spanish town of Llanera, once a place of worship for employees of an explosives factory, had been abandoned since the closure of the factory after the 1936-39 Spanish Civil War.

The artist Okuda San Miguel spent a week late last year painting the building with bright colors, featuring faces and a skull on the high ceiling. 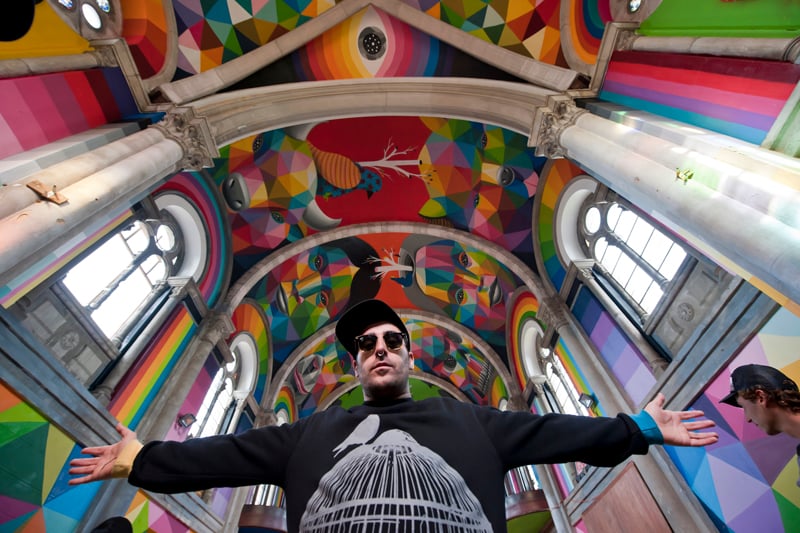 While the skateboarding church garnered international attention and praise, the Madrid-based daily El Pais said it has also generated controversy. One commenter on the newspaper’s Facebook page called the project “utterly disrespectful”; another suggested the artist try doing the same to a mosque.

In an exchange of emails with RNS, San Miguel insisted that “few people think that way,” and he added that townspeople welcomed the transformation.

“During the public presentation of the finished paintings we met some old men that had worked in the church in the past, and they liked … the new life brought to the church,” he wrote. 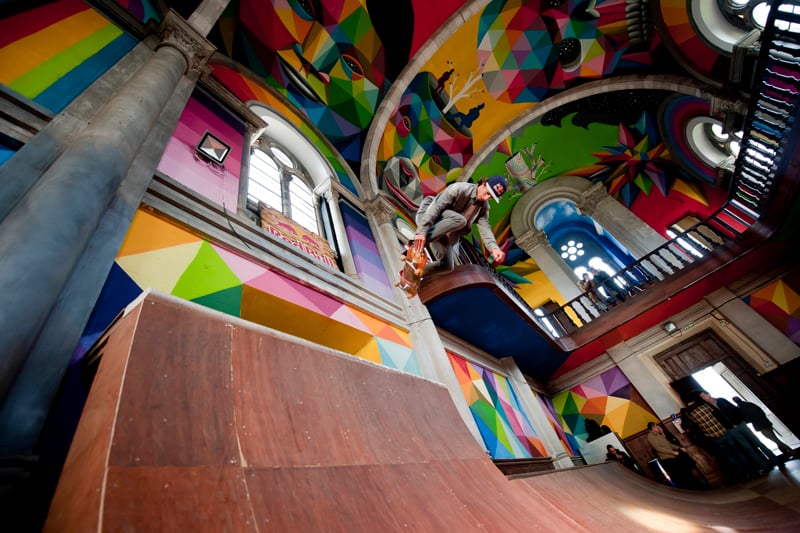 A skateboarder tries out the ramps during the inauguration of the Santa Barbara church in the northern Spanish town of Llanera after the building was converted into a skateboarding park. Photo courtesy of Elchino Pomares

The artist, who was born Oscar San Miguel, talked about his inspiration.

“I travel a lot and my art is closer to the Indian Gods … spiritualism which involves animals,” he said. “I think art is like a universal religion, without borders.”

Since completing the project, San Miguel has painted the outside of a church in Youssoufia, Morocco.

“A lot of Muslim people came to me to take photos with my art,” he said. “That is the most special thing which can happen, when art links different cultures, religions and people.”

News
Study: Biden still leads among Latino Christian voters, but Trump’s support has grown
Opinion
What good is faith when your fertility treatments aren’t working?
News
Who is Junipero Serra and why are California protesters toppling statues of this saint?
Catholicism
Amid pandemic, scores of US Catholic schools face closure
Coronavirus
On LA’s Skid Row, Catholic Worker’s ‘Hippie Kitchen’ adjusts to COVID-19
© Copyright 2020, Religion News Service. All rights reserved. Use of and/or registration on any portion of this site constitutes acceptance of our User Agreement and Privacy Policy, Privacy Statement and Cookie Notice. The material on this site may not be reproduced, distributed, transmitted, cached or otherwise used, except with the prior written permission of Religion News Service.