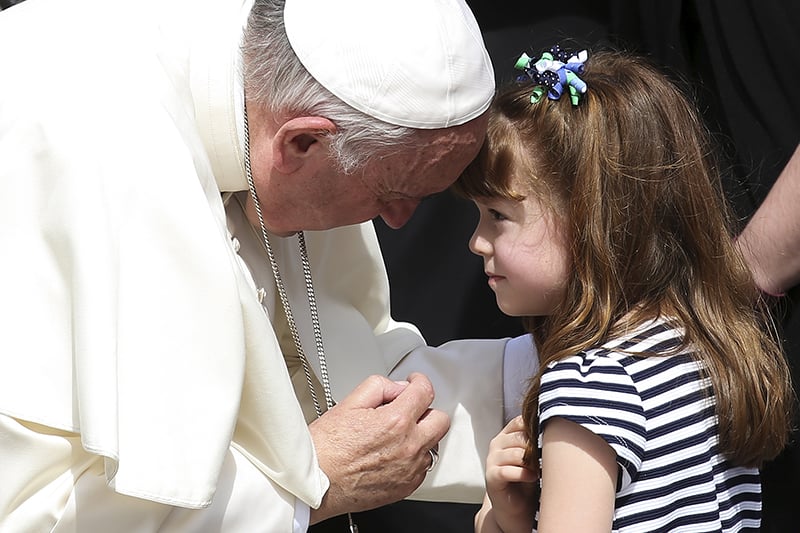 Pope Francis speaks to Elizabeth “Lizzy” Myers, a 5-year-old girl from Ohio who suffers from a genetic disease known as Usher syndrome, which leads to blindness and hearing loss, at the end of the weekly audience in St. Peter’s Square at the Vatican on April 6, 2016. REUTERS/Alessandro Bianchi
*Editors: This photo may only be republished with RNS-POPE-GIRL, originally transmitted on April 6, 2016.

VATICAN CITY (RNS) Pope Francis blessed the eyes of an American girl who suffers from a genetic condition that will make her blind, in a visit to the Vatican described as a “miracle” by her father.

“We came here hoping for some amazing memories for Lizzy … but what we got, we’ve seen several miracles,” said her father, Steve Myers, after Francis’ blessing with 5-year-old Lizzy on Wednesday (April 6).

The Myers family traveled from their Ohio home for the papal blessing, as part of a “bucket list” of experiences they wanted Lizzy to have before she loses her sight. Lizzy suffers from Usher syndrome Type II, which causes loss of hearing and sight, usually during the second decade of life.

It was after a visit by the family to the Warren Rupp Observatory in Bellville, Ohio, that the world first heard of Lizzy’s condition, after a newspaper there published a story about her. Later, Turkish Airlines offered the family a flight to a destination of the family’s choice.

Christine Myers, Lizzy’s mother, remembered the moment they chose the Eternal City: “When we said we were coming to Rome we told her, ‘That’s where the pope lives.’ She wanted to knock on his door when we got here!”

Lizzy has grown up Catholic and was well aware of the “big guy in the white hat,” as her mother put it. When it came to meeting the pontiff, Lizzy gave him a piece of a meteorite from the observatory she had visited.

The pope blessed Lizzy’s eyes after hearing her story. “He asked us to pray for him and said he would be praying for us,” Christine Myers said.

Steve Myers described the papal meeting as a powerful moment: “As soon as Pope Francis came up to where Lizzy was, a calm came over me. I don’t know how to explain it.”

The Myers family, including Lizzy’s younger sister, Kayla, was supported in Rome by
UNITALSI, an organization that arranges visits for the sick and disabled to Lourdes, the Catholic pilgrimage site in the Midi-Pyrenees region of southwest France.

During their visit to Italy, the Myerses had time for sightseeing around Rome, including a trip to the Coliseum and the Sistine Chapel. Despite Lizzy’s age, her father said, she was “enthralled by everything she saw” and sat in the middle of the Sistine Chapel staring at the famous Michelangelo frescoes.

Steve Myers also praised Italians for the warm welcome they had received: “We’re awestruck. Not just the meeting with the pope, but the way we’ve been embraced by the Italian people since we’ve been here. It’s made us feel like we’re with family.”

The family has plenty of other attractions on its bucket list. Experiences so far have included simple pleasures such as flying a kite, blowing bubbles and catching fireflies. The family plans to tour the U.S. but is waiting until Lizzy is a bit older.

Lizzy does not yet know she will go blind.

“We want her to lead as normal a life as she can, without her worrying,” said Christine Myers. “One day we’ll have to tell her. I just don’t want that day to come anytime soon.”

The Myers family is aware that given the high profile of the Vatican visit, there is a chance Lizzy could find out about her condition. But having already come across other children living with the condition, Steve Myers said it is worth the risk.

“We feel very strongly that if there’s another parent out there that might (have a child with Usher syndrome), and might not know that they’ll lose the sight, the risk is worth taking,” he said. “I feel that I’ve got so little time to show her so much, I can’t imagine if I had one year.”