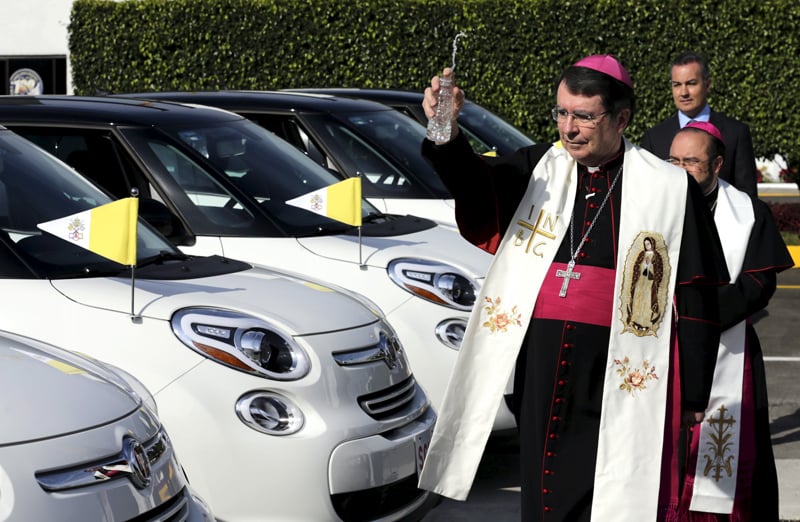 Apostolic Nuncio to Mexico Christophe Pierre, front, and Monsignor Eugenio Lira, general coordinator of the visit of Pope Francis to Mexico, sprinkle holy water on the six vehicles and five popemobiles (not pictured) during an event at the presidential hangar in preparation for the visit of Pope Francis to Mexico City on Feb. 8, 2016. Photo courtesy of REUTERS/Henry Romero
*Editors: This photo may only be republished with RNS-POPE-NUNCIO, originally transmitted on April 12, 2016.

(RNS) Pope Francis has named the Vatican’s envoy to Mexico as his new ambassador to the U.S., replacing the Vatican diplomat who sparked controversy last September by setting up a secret meeting between the pontiff and Kim Davis, the Kentucky county clerk who briefly went to jail rather than certify same-sex marriages.

The appointment to Washington of French-born Archbishop Christophe Pierre, now the Vatican’s representative, or nuncio, in Mexico City, was announced by the Holy See on Tuesday (April 12).

The move was widely expected: The current Vatican nuncio to the U.S., Italian Archbishop Carlo Maria Viganò, turned 75 in January, the date when Catholic bishops must submit their formal request for retirement to the pope. 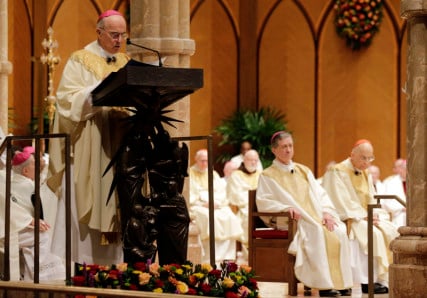 Archbishop Carlo Maria Viganò, apostolic nuncio of the United States, reads the apostolic mandate during the installation Mass of Archbishop Blase Cupich at Holy Name Cathedral in Chicago on Nov. 18, 2014. Photo courtesy of REUTERS/Charles Rex Arbogast/Pool
*Editors: This photo may only be republished with RNS-POPE-NUNCIO, originally transmitted on April 12, 2016.

While the pope can decide to let a churchman remain in office after he turns 75, Viganò was not expected to enjoy such latitude. Church sources say Francis himself was upset that Viganò set up the handshake meeting with Davis in the Vatican Embassy in Washington last September during the pope’s first-ever visit to the U.S.

The pontiff didn’t know who Davis was or what her case represented, and when news of the meeting broke, shortly after Francis returned to Rome, the controversy threatened to overshadow the central themes that Francis was preaching during the visit.

Viganò was initially named to the Washington post in 2011 as a result of another controversy: During the so-called “Vatileaks” scandal, internal memos revealed how he had pushed top Vatican officials — including then-Pope Benedict XVI, who has since retired — to rein in financial waste and corruption. But his plea fell on deaf ears and he was sent to Washington in a sort of diplomatic exile.

While in the U.S., Viganò came to be known as a staunch ally of cultural conservatives in the American hierarchy, strongly supporting the U.S. bishops’ campaigns against gay rights and the Obama administration’s contraception mandate.

In fact, in what was effectively his valedictory speech as Vatican ambassador, Viganò last week told future priests at the main U.S. seminary in Rome that the Catholic Church’s central challenge in America was protecting religious freedom.

RELATED STORY: No, Pope Francis didn’t exactly fire his ambassador to US — yet

Pierre, 70, is not going to ignore those issues, but he is expected to focus on the broader agenda embraced by Francis.

For example, Pierre, who spent nine years as nuncio in Mexico, helped set up the pontiff’s Mass at the Mexican border with the U.S. during Francis’ trip there in February, a powerful moment that underscored the pope’s push to reach out to those marginalized by society.

Pierre is also regarded as a seasoned diplomat with experience in the developing world (he previously served in Uganda and Haiti). He speaks fluent English and seeks consensus — a trait that will be valuable given the strains that often tear at the U.S. hierarchy.

More than just an ambassador to the U.S., a nuncio plays a vital role in ensuring the legacy of any pope because he is a key player in vetting the appointment of bishops by the pontiff. With Vatican trust in Viganò on the wane, appointments have been on hold for months, and Pierre will have much to do from the moment he arrives.

No date has been set for Pierre to begin, but it is likely to be sooner rather than later, and probably smack in the middle of what is shaping up to be a polarizing presidential campaign.