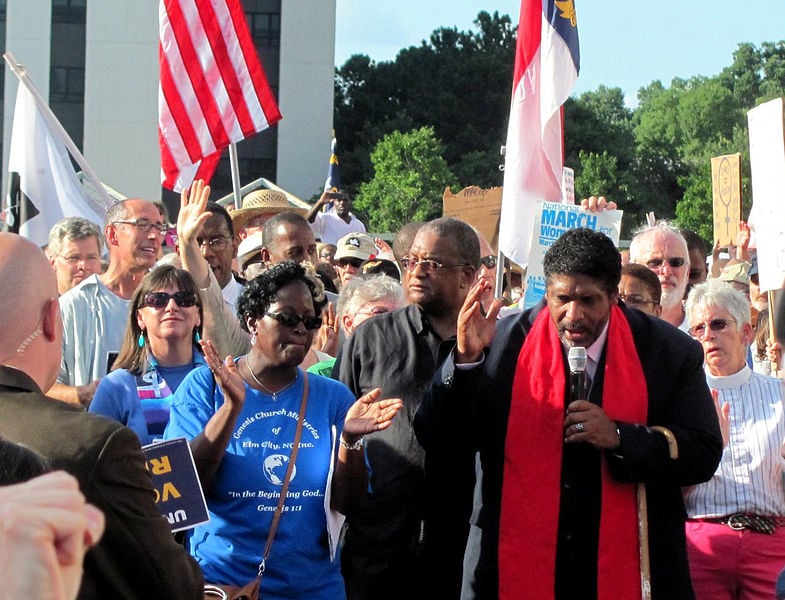 The Rev. William Barber, president of the North Carolina chapter of the NAACP, leading Moral Monday demonstrations in Raleigh, NC.

WASHINGTON (RNS) The founder of “Moral Mondays,” a protest movement spearheaded by progressive religious leaders, was asked to step off a plane he had boarded after speaking at a conference on racism.

The Rev. William Barber, president of the North Carolina chapter of the NAACP, described the incident that occurred Friday (April 15) in a statement, saying that while the plane was still on the ground, he requested that a flight attendant ask a loud passenger “bring it down a little bit.” He said the passenger responded, as the flight attendant left, with “disparaging remarks,” including the phrase “those people.”

Barber, who could not turn due to an arthritic condition, said he rose to ask the passenger about his remarks and said he would pray for him. He said he stood up before the crew gave safety instructions.

“I do not know who made the decision, but a plane official apparently called the police, who came to my seat and said, ‘Sir you need to leave the plane,’” Barber stated.

An American Airlines spokesman said Sunday that a passenger was removed from a flight after not following crew instructions and grabbing a flight attendant, the Associated Press reported.

Barber said he was “not at all happy about what I believe were the real reasons I was the one asked to leave.”

The other passenger told WTVD, an ABC affiliate, that his reference to “those types of people” was about people who call on a flight attendant to ask for help instead of speaking directly to the person that’s bothering them.

Douglas Grace, director of Ecumenical Advocacy Days, said organizers of the meeting in Arlington, Va., were appalled to hear about Barber’s removal.

“He has responded with the most wonderful grace and prayer,” said Grace, “even for the man that said the things to him that he did.”