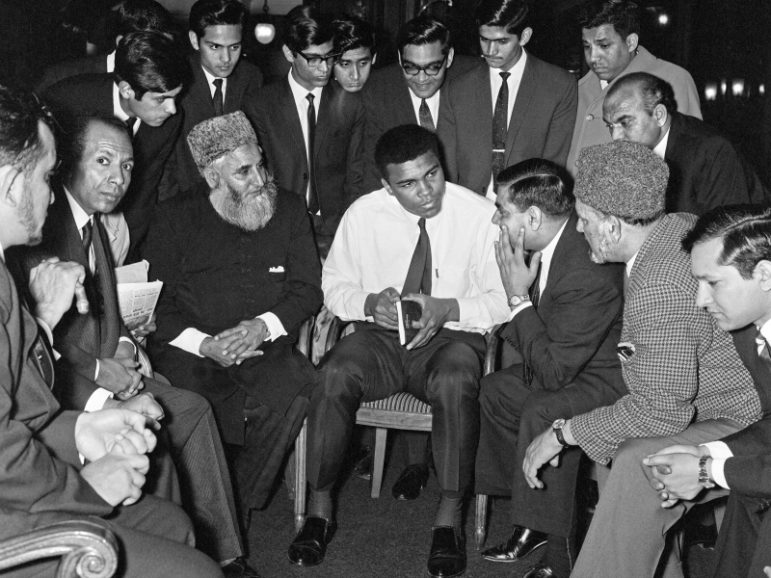 (RNS) When boxing star Cassius Clay declared himself a member of the controversial Nation of Islam back in 1964 and demanded to be called by his new name, Muhammad Ali, he shocked the world of sports and rattled a nation already struggling with social unrest over civil rights and the Vietnam War.

But Ali’s conversion also launched a pilgrimage of faith that would take him from the fringes of Islam through its orthodox heart, and from a virtual pariah to a global ambassador for faith — his own and others — as the key to peace.

For this legendary African-American athlete from the South, it was a journey spurred by the enduring racial injustice that America was only beginning to address, and it was one that presaged important religious changes and tensions that continue today.

Ali’s death late Friday (June 3) in a Phoenix-area hospital at 74 brought much of that remarkable story to light once again for a public that knew the acclaimed celebrity but may not have followed his winding spiritual path.

Ali was born in Louisville, Ky., on Jan. 17, 1942, as Cassius Marcellus Clay Jr., a name shared with a 19th-century abolitionist. His father, a billboard painter, was a Methodist but allowed Clay’s mother, who worked as a domestic, to raise their children as Baptists.

Young Cassius Clay was introduced to boxing when he was 12, and was so extraordinarily gifted that through his teenage years he amassed numerous amateur titles, culminating with a gold medal in the light heavyweight category in the Rome Summer Olympics in 1960.

But Ali, always a headstrong and often brash personality, was fast becoming aware of the racial inequities of his sport. “Boxing is a lot of white men watching two black men beat each other up,” as he put it in one of his many memorable lines.

He saw the same dynamic, and restiveness, in American society. While he gained fame as a professional boxer in the early 1960s he also gravitated toward the more fiery voices speaking out on behalf of African-Americans.

One of those was Malcolm X, who was key in introducing Clay to the Nation of Islam, a group that was founded in Detroit in the 1930s as an amalgam of Islamic teachings and messianic claims.

The central goal of the Nation of Islam — which traditional Islam does not consider authentically Muslim — was to empower African-Americans. Its members were often known simply as “Black Muslims,” and its message exerted a powerful draw on many disaffected African-Americans even as the movement underwent numerous leadership struggles and schisms.

(The main iteration of the Nation of Islam is currently headed by Louis Farrakhan, whose racially charged speeches and anti-Semitic remarks have become hallmarks of the modern-day movement.)

Even back then, when Clay first became involved, the Nation of Islam and its leader at the time, Elijah Muhammad, was known for demonizing whites and preaching racial separation.

In February 1964 in Miami, at the age of 22, Clay fought what would be his signature match, shocking the boxing world by taking the heavyweight title from reigning champ Sonny Liston in seven rounds.

He was at the height of his fame, and his talent, and the very next day he confirmed that he had joined the Nation of Islam. Within a few weeks he said he would be known from then on as Muhammad Ali.

“Cassius Clay is a slave name,” he said. “I didn’t choose it and I don’t want it. I am Muhammad Ali, a free name — it means ‘beloved of God’ — and I insist people use it when people speak to me and of me.”

The move was controversial not only among whites but among many blacks.

“The act of joining was not something many of us particularly liked,” Julian Bond, the civil rights activist and politician, once said, according to The New York Times.

“But the notion he’d do it — that he’d jump out there, join this group that was so despised by mainstream America, and be proud of it —  sent a little thrill through you.”

Yet it came at a cost to Ali. The World Boxing Association barred Ali after his conversion. Three years later, when Ali was drafted to fight in the Vietnam War he cited his beliefs as the basis for his refusal to serve, and that would lead to a total exile from the sport.

“My conscience won’t let me go shoot my brother, or some darker people, or some poor hungry people in the mud for big powerful America,” as he put it. “And shoot them for what? They never called me nigger, they never lynched me, they didn’t put no dogs on me, they didn’t rob me of my nationality, rape or kill my mother and father. … How can I shoot them poor people? Just take me to jail.”

Ali was convicted of draft evasion in June 1967 and sentenced to five years in prison. He remained out on bond while he appealed, but he was barred from all boxing, from the age of 25 to almost 29 — his prime.

Yet those years also saw the beginning of a sea change in American attitudes about the war, and the implementation of landmark civil rights laws. Ali was no longer the outlier he had once been.

He was able to begin boxing again in 1970, and a year later, the U.S. Supreme Court overturned his draft evasion conviction in a unanimous ruling.

As Ali started re-establishing his reputation as a brilliant and fearsome fighter, he also continued to speak out against racism, war and religious intolerance. All the while, he projected an unshakeable confidence and humor that became a model for African-Americans.

“To the degree that the world ever agrees to stop screaming and find a locus of consensus, a decent common ground, it did so on Muhammad Ali,” Thomas Boswell wrote in The Washington Post.

“He stood by his beliefs, which qualified as eccentric, almost alien to many, and took every form of punishment that the laws of his country demanded. He paid the price for his beliefs, right up to the Supreme Court, while never ceasing to speak out, especially against racial injustice.”

He was swept back into the ring “with joy,” as Boswell wrote.

Those years also marked a notable evolution in his religious beliefs. In 1975, Ali formally joined mainstream Sunni Islam and abandoned the Nation of Islam, denouncing its teachings.

“The Nation of Islam taught that white people were devils. I don’t believe that now; in fact, I never really believed that,” Ali wrote in a 2004 autobiography. “But when I was young, I had seen and heard so many horrible stories about the white man that this made me stop and listen.”

In his later years, Ali went on to embrace Sufism, which is a mystical approach to Islam that has been an important Muslim tradition since the faith was founded.

“Muhammad Ali, a man who stood by his principles despite criticism and hardship, exemplified a true patriot and a true Muslim,” Roula Allouch, national board chair of the Council on American-Islamic Relations, said in a statement at Ali’s passing.

Ali was also deeply affected by his declining health; he was diagnosed with Parkinson’s disease — a degenerative neurological condition — about three years after he retired from boxing in 1981.

“Now the things that once were so effortless — my strong voice and the quickness of my movements — are more difficult,” he once said. “But I get up every day and try to live life to the fullest because each day is a gift from God.”

As Voice of America reported, Ali’s daughter, Hana Yasmeen Ali, said in 2005 that her father moved away from the staunchly religious ways of his youth.

“His health and his spirituality have changed, and it’s not so much about being religious, but about going out and making people happy, doing charity, and supporting people and causes,” she said.

But Ali could still be outspoken when he wanted to.

In December, when Republican presidential hopeful Donald Trump was threatening to bar Muslims from the U.S., Ali released a statement that said the recent global terrorism crisis has “perverted people’s views on what Islam really is.”

“We, as Muslims, have to stand up to those who use Islam to advance their own personal agenda,” he said, without mentioning Trump by name. “They have alienated many from learning about Islam. True Muslims know or should know that it goes against our religion to try and force Islam on anybody.”

“I am a Muslim and there is nothing Islamic about killing innocent people in Paris, San Bernardino, or anywhere else in the world,” he said. “True Muslims know that the ruthless violence of so-called Islamic jihadists goes against the very tenets of our religion.”

During his championship reign, but especially in retirement, Ali met scores of world leaders and for a time he was considered the most recognizable person on earth, known even in remote villages far from the U.S.

Once asked about his preferred legacy, Ali said: “I would like to be remembered as a man who won the heavyweight title three times, who was humorous and who treated everyone right. As a man who never looked down on those who looked up to him … who stood up for his beliefs … who tried to unite all humankind through faith and love.

“And if all that’s too much, then I guess I’d settle for being remembered only as a great boxer who became a leader and a champion of his people. And I wouldn’t even mind if folks forgot how pretty I was.”

(This story contains some material from Reuters)