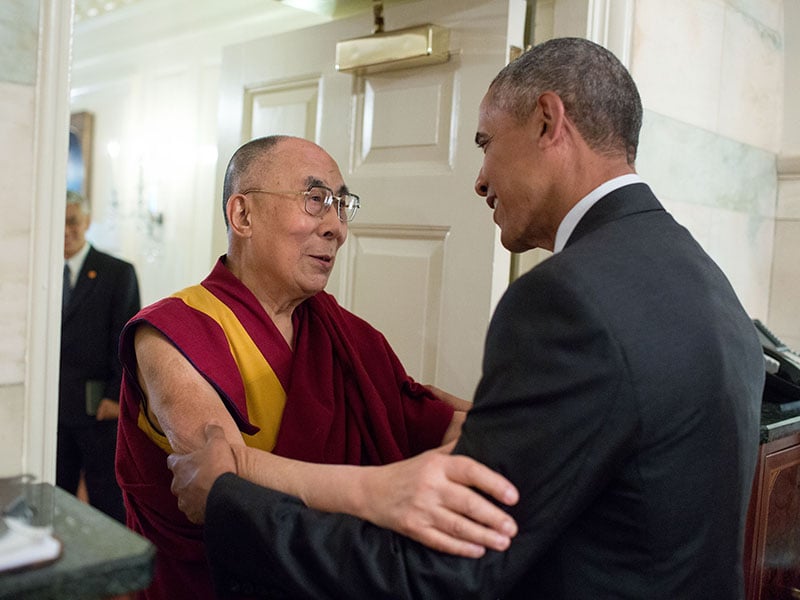 President Obama greets the Dalai Lama at the entrance of the Map Room of the White House, June 15, 2016. (Official White House Photo by Pete Souza) This official White House photograph is being made available only for publication by news organizations and/or for personal use printing by the subject(s) of the photograph. The photograph may not be manipulated in any way and may not be used in commercial or political materials, advertisements, emails, products or promotions that in any way suggest approval or endorsement of the president, the first family or the White House.
June 16, 2016
RNS staff

WASHINGTON — President Obama met behind closed doors with the Dalai Lama on Wednesday (June 15) in a White House meeting carefully designed to acknowledge the Tibetan leader's importance as a global spiritual figure while not according him a head-of-state status that might further provoke China.

The White House said the Dalai Lama expressed his condolences for the shooting attack in Orlando on Sunday, and the two men talked about climate change — an issue of particular importance in the Dalai Lama's Himalayan home.

But the meeting also took on geopolitical implications, since China claims Tibet as part of its territory and sees the Dalai Lama as a separatist figure.

White House press secretary Josh Earnest tried to downplay those concerns. "I would just reiterate once again that the U.S. position as it relates to Tibet has not changed. Tibet, per U.S. policy, is considered part of the People's Republic of China. And the United States has not articulated our support for Tibetan independence," he said.

A summary of the meeting released by the White House afterward said Obama reiterated that policy and "encouraged meaningful and direct dialogue between the Dalai Lama and his representatives with Chinese authorities to lower tensions and resolve differences."

Still, the meeting drew immediate protests from China, which sees the meeting as a threat to the one-China policy that's been a tenet of U.S. foreign policy for 44 years.

"The Chinese side reiterates that Tibetan affairs fall within China's domestic affairs, and no foreign country has the right to interfere," Foreign Ministry spokesperson Lu Kang said Wednesday. He said the Dalai Lama "is not a pure religious figure, but a political exile who has long been engaged in anti-China separatist plots under the cloak of religion."

The meeting was the fourth between Obama and the exiled Tibetan spiritual leader since Obama took office. All have been handled similarly, with the two men meeting in the White House residence — not the Oval Office, where Obama usually meets with heads of state — and without any press coverage. Earnest characterized it as a personal meeting instead of an official one.

In Tibetan Buddhism, the Dalai Lama is the reincarnated successor of Buddha.