(RNS) Does Hillary Clinton really love a lover of Lucifer?

Ben Carson seemed to hope his listeners would think so, after he delivered perhaps the most memorable lines at the Republican National Convention on Tuesday (July 19).

He dropped “the atomic bomb of moral judgment,” said Richard Beck, a professor at Abilene Christian University in Texas who has written a book on how Christians view the devil.

Around the nation, there was a lot of “what did Carson just say?” Even some fans of the failed GOP presidential candidate — and Clinton foes — raised eyebrows. Others were simply flabbergasted.

To sum up, Carson said that Clinton considers the left-wing activist Saul Alinsky a hero, and that Alinsky “acknowledges” Lucifer. Carson seemed to imply that this acknowledgment equated to an admiration of the devil and that Clinton had chosen a despicable mentor for herself. Richard Beck, a professor at Abilene Christian University in Texas who has written a book on how Christians view the devil. Photo courtesy of Jana Beck

“Whenever you evoke Lucifer in a culture which is largely Western and secularized, and where we don’t have a lot of room to talk about the devil, it gets a huge reaction,” he said.

“It suggests that the Prince of Darkness still has a hold over our collective imaginations.”

Beck sees Carson’s invocation of Lucifer as a misuse of devil language that speaks to Christians’ “lost vision of how Jesus saw his battle with Satan.” In Beck’s eyes, that’s a fight to spread God’s love to defeat the devil’s hate and war.

Devil references should not get pinned on political foes, he continued, but should instead be reserved “for some of the worst … from ISIS beheading people to Hitler.”

So did Alinsky align himself with the devil?

The Chicago-based community organizer, who died in 1972, was known for his in-your-face but nonviolent tactics and was a hero to many liberals for his work on behalf of the poor. (The facts bear out that Clinton is an Alinsky fan and that she wrote her senior thesis in college about him. But they also show that as a young woman she turned down a job he offered her and that she much preferred to work within the system than embrace his radical approach.)

Here’s how Carson tried to connect Alinsky — and by extension, Clinton — to the devil.

“He wrote a book called ‘Rules for Radicals,'” Carson said of Alinsky.

“It acknowledges Lucifer, the original radical who gained his own kingdom. Now think about that. This is our nation where our founding document, the Declaration of Independence, talks about certain inalienable rights that come from our creator, a nation where our Pledge of Allegiance says we are ‘one nation under God.’ This is a nation where every coin in our pockets and every bill in our wallet says, ‘In God We Trust.’

“So are we willing to elect someone as president who has as their role model somebody who acknowledges Lucifer?” Carson asks the GOP crowd. “Think about that.”

But other commentators pointed out that the tough-talking Alinsky, though he made references to the devil and himself as outsiders, did not do so to indicate any love of evil, but rather to show the efficacy of working outside the system. The “Lucifer” reference to which Carson referred is one of three short quotes Alinsky placed at the beginning of “Rules for Radicals: A Pragmatic Primer for Realistic Radicals.”

Here is what the activist had to say about the devil in the opening of his last book:

“Lest we forget at least an over-the-shoulder acknowledgment to the very first radical: from all our legends, mythology, and history (and who is to know where mythology leaves off and history begins or which is which), the first radical known to man who rebelled against the establishment and did it so effectively that he at least won his own kingdom – Lucifer.”

What about the other two epigraphs in his primer? Alinsky acknowledged Rabbi Hillel and Thomas Paine.

“The epigraph strikes us as more of a provocative literary comment rather than direct advocacy for satanism. Alinsky seems to be acknowledging Lucifer only in a figurative sense, rather than a religious or devotional sense.” 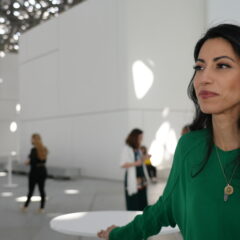 Spiritual Politics
Americans are as divided as ever, and religion is the wedge
Follow us on Facebook!
Submit your photos to RNS