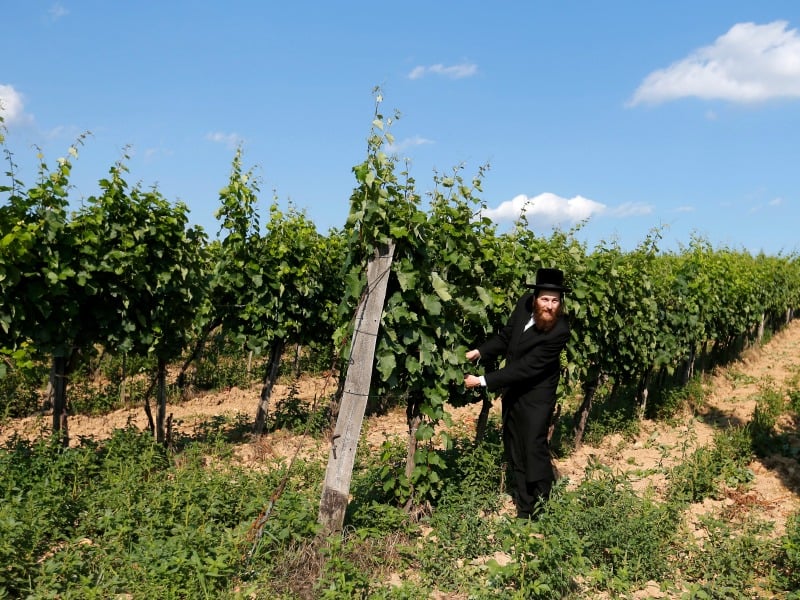 A rabbi looks at grapes in a vineyard in famous Tokaj wine region in the village of Mad, Hungary, July 21, 2016. Photo by Laszlo Balogh/REUTERS
July 23, 2016
RNS staff

MÁD, Hungary (Reuters) Two plaques put up in the village of Mád last month commemorate the important role Jewish families played in making Hungary's golden Tokaj wine, most of whom perished in the Holocaust.

The plaques mark another step in Hungary on a painful journey in coming to terms with the treatment of its Jews during World War II, when most were handed over to the Nazis.

After two centuries of prosperity generated from the sweet wine that became popular in the courts of Europe, Jews in Tokaj were deported with the help of the Hungarian Gendarmerie to a ghetto and from there to the Auschwitz concentration camp.

The plaques were mounted on the former home of the Zimmermann family, one of the biggest and most successful winemakers and wine traders of Mád in the northeast of Hungary, after a lengthy campaign by family members.

From the Zimmermanns sent to Auschwitz from their home in Mád only Susy Oster, who was born Zsuzsanna Zimmermann in 1928 and now lives in the United States, escaped the gas chambers.

But when asked if her mother had found some peace now that her family home in Mád was remembered, her daughter Beverly Fox said in an emailed response to Reuters:

"No, it has not given her any peace.

"How can it when everything that generations of her family toiled for, and not just her family, but all Jewish families, had everything taken away from them? How can you ever have peace after your country deports you ... and sends you through the gates of hell?"

The central European nation deported half a million Jews. In the final months of the war, Hungarian fascists executed thousands of Jews, shooting them and pushing them into the Danube River.

From the village of Mád, around 250 Jews were deported. Their properties and vineyards on a plain of volcanic soil near the Carpathian mountains were mostly confiscated. 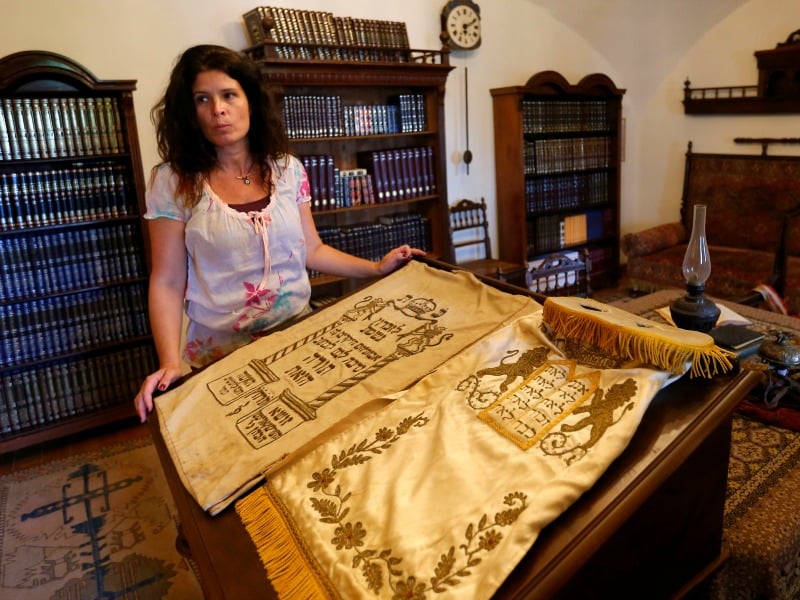 Mariann Frank, leader of a project that aims to revive Jewish traditions in Hungary's Tokaj region, speaks in the newly restored rabbi's house in Mad, Hungary, on July 18, 2016. Photo by Laszlo Balogh/REUTERS

Fox recognized her mother's home in a photo of the winemaking company Royal Tokaji, which now owns the buildings, when she was planning a trip to Hungary and the family embarked on a mission to gain recognition of the area's Jewish roots.

Around 30 Jews returned to the village after the war but they had all left by the 1970s, and today there is not a single Jewish family living in Mád.

Alongside the plaques, however, there is a push to rediscover the winemaking region's Jewish roots. Hundreds of Hasidic Jewish pilgrims flock annually to Mád to visit the Baroque synagogue and the newly restored rabbi's house.

The plaques marked the first time that any Jewish family was given public recognition in Tokaj.

"This is a unique story: As far I know this is the first time that a (Jewish) family is remembered this way with a plaque in the Tokaj region," said Mariann Frank, who leads a project to revive the region's Jewish traditions.

"If we face this openly, and put up as many signs as possible to commemorate the really once flourishing Jewish winemakers and wine traders of the region, I think the region and the country would benefit," said Gabor Banfalvi, who runs tours of the region.

The region is a UNESCO World Heritage Site and attracts tens of thousands of tourists each year, among them descendants of the Jewish families who once lived there. A wine expert inspects a wine bottle at a vault containing 280,000 bottles of museum wines, some of which date back to 1895, in Tokaj on Oct. 22, 2013. Dubbed the "king of wines, the wine of kings" by Louis XV of France, Hungary's Tokaji wine is undergoing a makeover as the region hopes to regain fame lost in decades of mismanagement. Known for its exquisite sweet tipple, the eastern Hungarian wine region is clamping down on poor quality produce and establishing new standards as it tries to lure back high-end customers to arguably the best dessert wine in the world. Photo by Laszlo Balogh/REUTERS

The Tokaj region produces one of a handful of wines around the world made with fruit affected by "noble rot," induced by the "Botrytis" fungus that shrivels grapes and concentrates their sugar. The flagship is Tokaji Aszu.

Paired with foie gras, blue cheese or desserts, Tokaj wines are valued for their richness and complexity.

Tokaj's Aszu wines first appeared in literature in 1576, but it was in the 17th century that the wine became a favorite of wine connoisseurs.

Louis XV of France, who served it to his famous mistress Madame de Pompadour, called Tokaji the "Wine of Kings, King of Wines." Royalty, writers and composers including Peter the Great, Goethe, Liszt and Schubert were all devotees.

The first Jews arrived in Mád in the early 1700s. As the trade in Tokaj wines flourished, the Jewish community became more established around Mád with the building of the synagogue and the setting up of a school for rabbis.

After World War II, Zahava Szasz Stessel in the book "Wine and Thorns in Tokay Valley" recounts how survivors returned home to find their houses occupied and their possessions taken.

During the communist years, the vineyards were used for mass production and run by cooperatives to slake the thirst of the Soviet Union and other states, but when that era ended foreign investors moved in to restore the wine's quality. 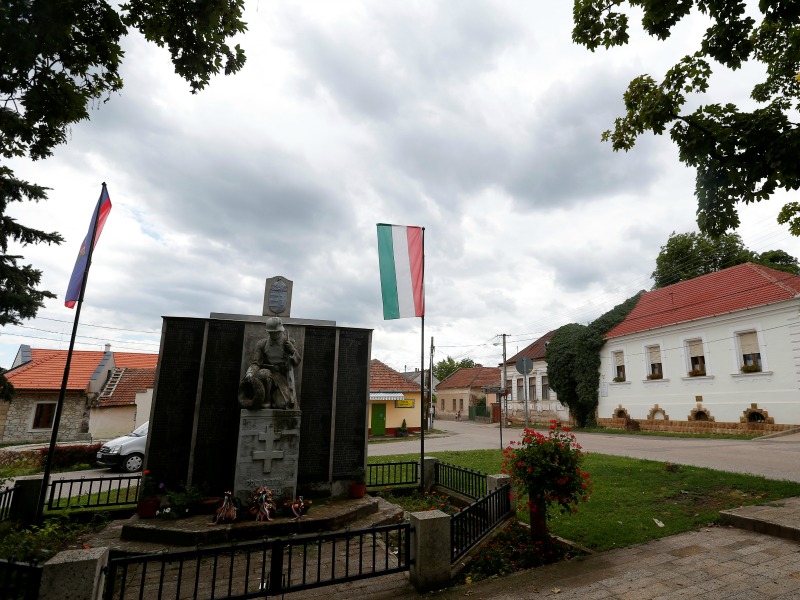 A view of the former home of the Zimmermann family in the village of Mad, Hungary, July 18, 2016, with a monument to the fallen heroes of the two world wars in the foreground. Photo by Laszlo Balogh/REUTERS

Importance of the plaques

Royal Tokaji Wine Co. was founded by British wine writer and expert Hugh Johnson. Another investor in the firm was Jacob Rothschild of the banking family.

The Zimmermanns contacted the company last year, and after lengthy negotiations the plaques were put up. Fox described the process as "extremely hard."

Royal Tokaji General Manager Charlie Mount told Reuters that it was quickly established that some of the buildings that house the company's offices had been owned by the Zimmermanns.

"There was some difficulty with the records in deciding and agreeing exactly which of those buildings had been owned by the Zimmermann family," he said.

Mount said the family had not asked for the buildings to be returned to them. Fox said that her mother in the past had considered asking for reparation from the Hungarian state but had never lodged an official request.

"Susy did think of asking for restitution, but the Hungarian government was not giving any," Fox wrote in an email.

Mount also said that it was a long and sensitive process to agree to a wording on the plaques that reflected history accurately and also met with the family's approval.

"This is the family story we are telling and it was very important to get that correct. And that was difficult, it was a long process and I think it should be a long process because these are important matters that have to be correctly reflected," Mount said.

The plaques now say that from the early 1800s, through generations, the Zimmermann family produced and traded wines in Tokaj. "In May 1944, the family was deported to Auschwitz along with other Jewish families of Mád," the inscription reads.

In an interview recorded by the Holocaust Memorial Museum in Washington in 1994, Susy Oster recalled her childhood in Mád as an idyllic period that ended suddenly in May 1944.

"We were taken to this very old beautiful temple ... the whole population of Mád was confined to the temple for one night," she said. "The next morning we were walked through our town to the railroad tracks and put on a train."

September 21, 2020
Related Posts
By Alejandra Molina
In Oregon, churches and anti-fascists unite to provide mutual aid to fire evacuees and others in need
By Yonat Shimron
Kamala Harris is more than her gender and race. She is also the future of American religion.
By Jeffrey Salkin
I stand with Bari Weiss
By Jeffrey Salkin
Yes, confederate names matter
By Alejandra Molina
Four young people of different faiths move into a home together, then a pandemic happens