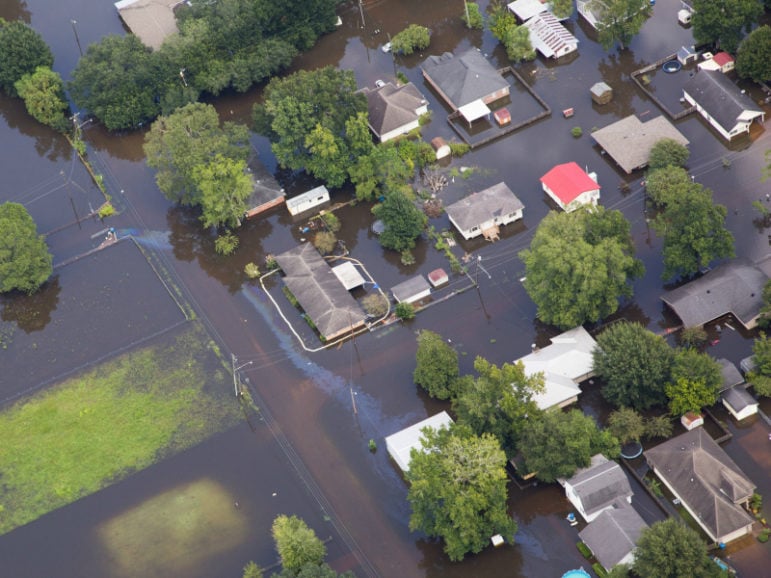 (RNS) Comes the news that the Baton Rouge flooding destroyed Tony Perkins’ home and forced the Family Research Council president and his family to escape by canoe to their RV on higher ground.

Perkins revealed this in a special segment of his radio show a couple of days ago, describing the disaster as “a flood of near biblical proportions.”

There are those who have noted some irony here, since when Hurricane Joaquin threatened Washington last year, Perkins declared the storm to be God’s punishment for the Supreme Court’s same-sex marriage decision.

That of course recalled the interpretations of Hurricane Katrina by Pat Robertson, John Hagee, and Yehuda Levin, as well as Robertson and Jerry Falwell’s explanation of 9/11, and so on.

These are what’s known in the trade as exercises in theodicy — justifying bad things as demonstrations of God’s goodness, omnipotence, and righteous judgment.

So what’s the judgment on Baton Rouge?

Far be it from me to suggest that it’s God’s punishment for supporting Donald Trump, whom some are calling the Antichrist of American politics. True, Louisiana went for Trump in the March 5 Republican primary, but so did a lot of other states that haven’t been hit by a flood of near biblical proportions.

On the other hand, after supporting Cruz in the primaries, Perkins declared that he would vote for Trump in the general and urged others to do the same, delivering a speech to that effect at the Republican National Convention. He’s said he thinks Trump’s candidacy could enable America to become “a recipient of [God’s] blessing.”

But I don’t think the Almighty would be so harsh as to punish all of Baton Rouge for that piece of wishful thinking.

Nor, apparently, does Perkins, who in his interview stayed away from any speculation of this sort. The flood, he said, “is a great opportunity for the Church to minister.” The experience has taught him “what is important. Sometimes we get too occupied with the other things of life.”

Another useful lesson might be to keep your mouth shut about divine punishment when disaster strikes.

As Voltaire demonstrated, theodicy is a mug’s game. You’re better off taking the advice of British poet A.E. Housman:

“Malt does more than Milton can

To justify God’s ways to man.”