(RNS) As one of the 20th century’s pre-eminent Christian spiritual voices, the Catholic priest and missionary Henri Nouwen touched millions of people worldwide with his moving lectures and 39 published books.

Revered as saintly by Catholics and Protestants alike, Nouwen eschewed dogma and judgment in favor of a personal, confessional style that affirmed a theology of the heart.

In the two decades since his death from a heart attack at age 64, Nouwen’s popularity and influence have spawned at least five biographies. His reflections on faith, loneliness, vulnerability, love, prayer, social justice and sexuality have won over modern audiences.

But this beloved priest had an even more intimate side, known only to those who corresponded with him privately.

Nouwen’s letters chronicle his lifelong struggles with celibacy, his disaffection with academia and his prolonged recovery from a nervous breakdown — among the many spiritual stations that marked his remarkable journey. 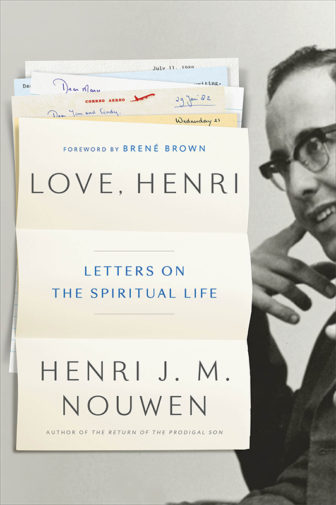 Now a selection of Nouwen’s letters, 204 of them, has been published in “Love, Henri: Letters on the Spiritual Life,” commemorating the 20th anniversary of Nouwen’s death.

Nouwen’s correspondents were friends, colleagues, public figures and total strangers who wrote to him in periods of anguish and despair. He responded to virtually all of them.

This volume contains Nouwen’s letters to then-Sen. Mark Hatfield, the Oregon Republican investigated on ethics violations; Fred Rogers of “Mister Rogers’ Neighborhood”; and Joan Kroc, the philanthropist and third wife of the founder of the McDonald’s hamburger empire.

“My own life is so broken and tainted with sin and ambiguities that I do not have the clarity of vision that is required,” Nouwen wrote to the beleaguered Hatfield in 1984. “But I hope that you are willing to receive these reflections as coming from a friend who deeply respects you, sincerely loves you and eagerly wants to offer you support and friendship during these hard times.”

Nouwen wrote letters from the Yale Divinity School and Harvard Divinity School, academic posts he would later abandon for a missionary life. He wrote from Lima, Peru, where he served in a poor barrio with priests from the Maryknoll order. He wrote from the Abbey of the Genesee in New York, where he spent time among Trappist monks, baking bread, performing physical labor and praying for long hours.

He wrote from a hospital bed while convalescing from a freak car accident that he says nearly killed him. And he wrote from L’Arche Daybreak, a community near Toronto; here, Nouwen — now approaching celebrity status in religious circles — bathed, fed and clothed severely developmentally disabled residents for the final decade of his life.

“For me, the astounding thing (about the letters) is their volume — the number of people, the different types of people — and the consistency with which Henri generously wrote back,” said Gabrielle Earnshaw, the project editor who compiled and selected the letters in the volume.

“People wrote to him in crisis — they were really suffering,” said Earnshaw, who worked as the Nouwen archivist for 16 years until earlier this year. “This generosity of spirit coming from him was consistent over decades to the widest variety of people.”

The quest to recover these letters is a story unto itself, as most of Nouwen’s epistles still remain in the possession of his far-flung correspondents. Only about 3,000 of Nouwen’s dictated letters were duplicated when written and form part of his archives, a collection of photos, film, audio, documents, drafts, clerical vestments and ephemera housed at the University of Toronto.

To date, some 2,000 of Nouwen’s outgoing letters that were not duplicated have been recovered from his correspondents. These, along with the 3,000 duplicates, are the source of the 204 letters in the present volume.

The Nouwen letter recovery project, which got underway shortly after the priest’s death in 1996, is far from complete. Researchers are still seeking an estimated 10,000 personal letters — about two-thirds of Nouwen’s epistolary corpus.

Earnshaw said many of Nouwen’s correspondents aren’t ready to part with these “treasured precious documents” penned by Nouwen’s own hand and offering his support to people suffering broken marriages, terminal illness and spiritual desolation. Some correspondents have notified the Nouwen archive they intend to bequeath the letters to their children, while others have said the contents are simply too private to be shared with a wider public.

Of the letters that were successfully recovered, Earnshaw said, some were sent back to the archive framed, suggesting they were displayed in private homes or offices.

“There were others that I remember were tear-stained,” Earnshaw said. “There were actual tear drops on the letter.”

The first letter in “Love, Henri” was written in 1973, from Holland, when Nouwen had been a priest 16 years. By then he had already participated in the Rev. Martin Luther King Jr.’s march on Selma in 1965, and his discovery of the liberation theology movement in Latin America was yet to come.

He had already experienced the pangs of same-sex attraction that would tug at him his entire life and would later contribute to a mental collapse. Nouwen never publicly acknowledged his homosexuality, and it is widely believed that he remained faithful to his vow of celibacy, against the advice of some friends.

Nouwen often based his spiritual counsel on his own personal experience, specifically his feelings of inadequacy and emotional neediness. In that vein, a 1976 letter, written from Switzerland, strives to lift a friend out of a spiritual abyss.

“A simple-minded, simple-eyed commitment to God is all that counts,” Nouwen wrote. “We will never overcome the demons by analyzing them, but only by forgetting them in an all-consuming love for God. God is simple, demons are complex. Demons like to be analyzed, because that keeps our attention directed to them. God wants to be loved.”

A recurring theme in Nouwen’s letters is the liberation of the self by letting go of worldly ambitions and overcoming the ego. In 1980 he expressed these ideas by recounting an anecdote about the Trappist poet Thomas Merton:

“After many years in the monastery he came to town and suddenly realized the joy of being human, the joy of being part of the human race, the beauty of being a weak, vulnerable human being like all other human beings,” Nouwen wrote. “When I discovered not only that my weakness was my humanity but also that my humanity was a forgiven humanity, I truly found my freedom.”

At L’Arche, the community for the developmentally disabled, during recurring bouts with loneliness, Nouwen befriended Nathan Ball, an assistant half his age with whom Nouwen developed a unique spiritual bond.

This special friendship with Ball, who was not gay, became one of the most important relationships in Nouwen’s life, but it also nearly broke him. In late 1987, Nouwen’s attentions became so intense that Ball broke off the friendship and cut off all contact, sending Nouwen into an emotional tailspin. Nouwen subsequently spent seven months in intensive therapy at a treatment center for the clergy.

Nouwen’s letters to Ball are among the most evocative in the collection, his sexual longing sublimated to poetic heights, an emotionally searing plea for the unattainable.

“I am more and more convinced that I will be a better friend when I have dared to face my loneliness alone,” Nouwen wrote Ball in early 1986. “I am grateful that I can share with you my great, often agonizing, search for affection and deep friendship. It has been a life-long struggle and it will probably always be with me, but having a dear friend to help me struggle faithfully and without fear makes all the difference.”

After recovering from his emotional breakdown, Nouwen would come to characterize his feelings about Ball as an infatuation. The two Catholic servants later reconciled and repaired their friendship.

During this period, Nouwen’s energies blazed. L’Arche was his spiritual homecoming, a time during which he published 11 books, and was working on five books that were left in various stages of unfinished drafts when his heart failed.

“He was in full bloom of his ministry when he died,” Earnshaw said.

“And yet the two of them developed a strong peaceful bond,” she said. “Henri speaks of Adam as being his greatest teacher.”

The letters in the anthology continue until early August 1996, about six weeks before Nouwen’s death.

Taken together, they paint “an incredibly beautiful portrait,” Earnshaw said.  “I’m hoping this letter book will encourage people who have letters in their care to see how valuable they are to other people.”

(John Murawski is a correspondent based in Raleigh, N.C.)