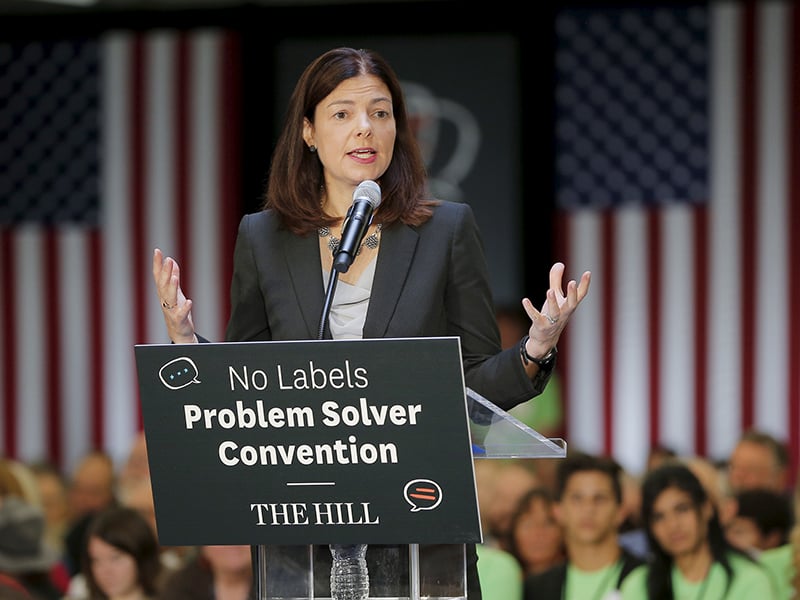 (RNS) Democratic vice presidential nominee and practicing Catholic Tim Kaine may be in more hot water with church leaders after ending Tuesday night’s debate with GOP counterpart Mike Pence by reiterating his support for a woman’s right to choose an abortion.

But in New Hampshire, Republican Sen. Kelly Ayotte, whose tight re-election race could be key to her party retaining control of the Senate after November, may have a budding Catholic problem of her own.

It turns out that Ayotte’s campaign is giving away free condoms at the state’s largest university to underscore her effort to pass legislation to increase access to over-the-counter birth control, such as the pill.

“What better way to call attention to this issue than by literally making birth control more accessible?” Liz Johnson, a spokesperson for the Ayotte campaign, told the New Hampshire Union Leader this week.

“Use Condom Sense!” read a sign next to a bowl of free condoms at the University of New Hampshire that was spotted and tweeted on Monday (Oct. 3) by Josh McElveen of the local news station WMUR.

“As part of Kelly’s commitment to making birth control available over the counter, please take a free condom,” it says.

The promotion had apparently begun a week earlier.

Ayotte has touted her Catholic bona fides and is strongly supported by groups that oppose abortion, and abortion rights groups weren’t buying this effort as a sign of some newfound conviction on reproductive health.

But her stance caught the attention of some more traditionalist Catholics:

Then again, most U.S. bishops would be loathe to publicly deny Communion to Tim Kaine or any Catholic pol over abortion, so it’s unlikely Ayotte will get into any sacramental trouble over a bowlful of free condoms.

Besides, Republican presidential nominee Donald Trump’s renegade candidacy has upended so much conventional wisdom that Ayotte’s condom distribution gimmick may be the least of her worries.

In a debate on Monday with her Democratic challenger, Gov. Maggie Hassan, Ayotte said that Trump is “absolutely” a role model for kids. She later tried to walk that statement back, saying she “misspoke” and believes neither Trump nor Hillary Clinton is a great role model.

Ayotte has also said she will vote for Trump but will not formally endorse him.