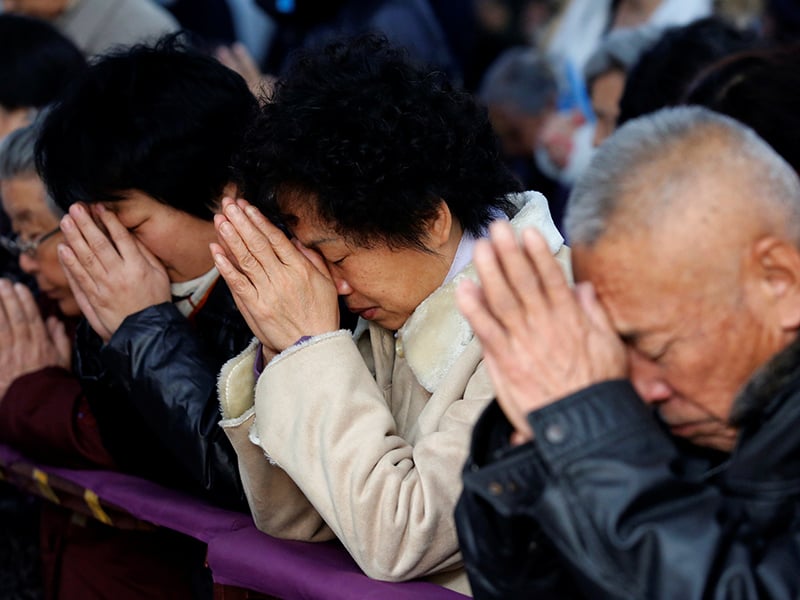 ROME/HONG KONG/BEIJING (Reuters) - Representatives from the Vatican and China are expected to meet before the end of the month in Rome in an effort to finalize a deal on the ordination of bishops on the mainland, a move aimed at ending a longstanding dispute, according to Catholic Church sources familiar with the negotiations.

The Church sources also told Reuters that China is preparing to ordain at least two new bishops before the end of the year and these appointments would have the blessing of the Vatican. A person with ties to the leadership in Beijing confirmed that these ordinations would go ahead.

For more than six decades, China's ruling Communist Party has strongly opposed Rome's right to ordain Chinese bishops in a bitter contest for authority over as many as 10 million Catholics on the mainland. Bishops, priests and lay Catholics loyal to Rome have faced persecution, which has sparked skepticism over the détente in some Catholic quarters.

In yet a further sign of progress, the Vatican has reached a decision to recognize at least four Chinese bishops who were appointed by Beijing without the consent of the pope and so are considered illegitimate by the Holy See, according to Catholic Church sources and others briefed on the talks. The decision follows a breakthrough meeting in mid-August in Beijing between the Vatican representatives to talks with China and several of these bishops.

For the Vatican, an agreement on the ordination of bishops is important because it would lessen the possibility of a formal split within the Catholic Church in China, which is divided between a community that follows the state-sanctioned Catholic hierarchy and an "underground" community that swears allegiance only to the pope in Rome. A deal on the ordination of bishops would help to unite these two communities, say Catholic Church and Vatican sources.

An agreement "would definitely remove the risk of a schism (within the Church in China), which for sixty years has been a potential threat," said Elisa Giunipero, a researcher at the Catholic University of Milan who has studied the history of the Catholic Church in China for 20 years.

The latest developments are part of behind-the-scenes negotiations that have been driven by Pope Francis. A deal on the ordination of bishops would be a major leap forward in efforts to bridge a decades-old rift between the Chinese Communist Party and the Vatican.

Since becoming leader of the Catholic Church in March 2013, Francis has made it a priority to chart a new course in the Vatican's contentious relationship with China. Reuters reported in July that Francis had sought to meet President Xi Jinping during a 2014 trip to New York in an effort to smooth the way to talks, and that a joint working group had been set up earlier this year in April to hammer out a deal on the bishops. The issue of full diplomatic relations is not currently on the table.

A deputy spokesperson for the Vatican, Paloma Garcia Ovejero, said the Holy See had no comment in response to questions from Reuters. The Chinese foreign ministry didn't respond to questions.

Vatican officials would like to see the appointment of the bishops before China's Ninth National Assembly of Catholic Representatives, which is expected to convene in December, according to Catholic sources. The Assembly is the highest authority governing the church in China and appoints the heads of the most important state-backed Catholic institutions on the mainland -- the Chinese Catholic Patriotic Association and the Chinese Catholic Bishops' Conference.

The Assembly last met six years ago when tensions were high between Beijing and the Vatican over China's appointment of new bishops without papal consent. The Vatican retaliated by excommunicating three of these bishops in 2011 and 2012.

Now, the Vatican is anxious to conclude a deal on the ordination of bishops to head off another showdown with Beijing and to forestall a schism among China's Catholics, the Church sources say.

The ordination of new bishops in China is also pressing because some 30 of the more than 100 dioceses on the mainland are currently vacant, while a similar number are led by aging bishops who are 75 or older. Three people familiar with the negotiations said the talks about the appointment of the new bishops were focused on the dioceses of Changzhi, in the northern Shanxi province, and Chengdu, the capital of the southwestern Sichuan province. Separately, a person with ties to the leadership in Beijing said that the new bishops would be ordained in Chengdu and the city of Xichang, in Sichuan.

It was during the last round of talks in Beijing in August that the Vatican delegates were permitted to meet with several of the bishops whom the pope does not recognize. Catholic sources say they view this as a positive gesture by China, which had previously barred contact between the bishops and Vatican representatives. The meeting, the sources said, paved the way for Vatican recognition of some of these bishops.

Along with Ma, the other three bishops whom the Vatican is set to recognize are Guo Jincai, the bishop of Chengde in Hebei province near Beijing; Yue Fusheng, the bishop of Harbin in the northern Heilongjiang province; and Tu Shihua, the bishop of Puqi in Hunan province.

In total, there are eight bishops whom the Vatican has refused to recognize. Of the remaining four, two have children or girlfriends and the other two head dioceses where there is already an existing bishop who has been approved by the Vatican, according to Catholic sources.

During the August meeting in Beijing, the sides agreed on the principles that would govern the appointment of new bishops, say people with knowledge of the talks. According to a draft agreement, new Chinese bishops will be chosen by local clergy, with the pope making the final appointment. The pontiff can veto a candidate, for instance on ethical grounds, provided the Vatican presents evidence supporting such a decision to Beijing.

For the Vatican, which is the only Western state that doesn't have diplomatic ties with Beijing, further détente with China following a deal on the bishops could make life easier for Christians on the mainland who have suffered decades of persecution at the hands of the Chinese authorities. For Beijing, better relations with the Holy See could improve its international standing and ultimately pry the Vatican away from the self-governing island of Taiwan, which China views as a renegade province.

In some quarters of the Catholic Church, including among the underground community in China, there is concern over a deal between the Vatican and Beijing. That's especially the case in Hong Kong, where local missions and clergy maintain ties with foreign and Chinese priests working on the mainland, often underground. Some fear the Vatican may make too many concessions to Beijing and that a deal will not lead to an improvement in the lives of Catholics in China.

Despite the progress toward an agreement on the ordination of new bishops, the Vatican and China are still at loggerheads over a range of other issues. In one case, for instance, some Chinese officials are still pushing for the appointment of a bishop without papal approval, according to two Church sources.

The matter of Thaddeus Ma Daqin also needs to be settled. Ma, the auxiliary bishop of Shanghai, was placed under house arrest in 2012 when he announced at his ordination as a bishop that he could no longer remain in the state-backed Catholic Patriotic Association. Ma remains under house arrest despite writing in a blog post in June that his move had been "unwise."

There is also the issue of some 30 bishops who belong to the underground Catholic community and who, along with local priests, face pressure from the authorities to join the state-sanctioned Chinese Catholic Patriotic Association. The Vatican is hoping that China will recognize these bishops once the issue of the eight bishops it considers illegitimate has been resolved, say Catholic officials.