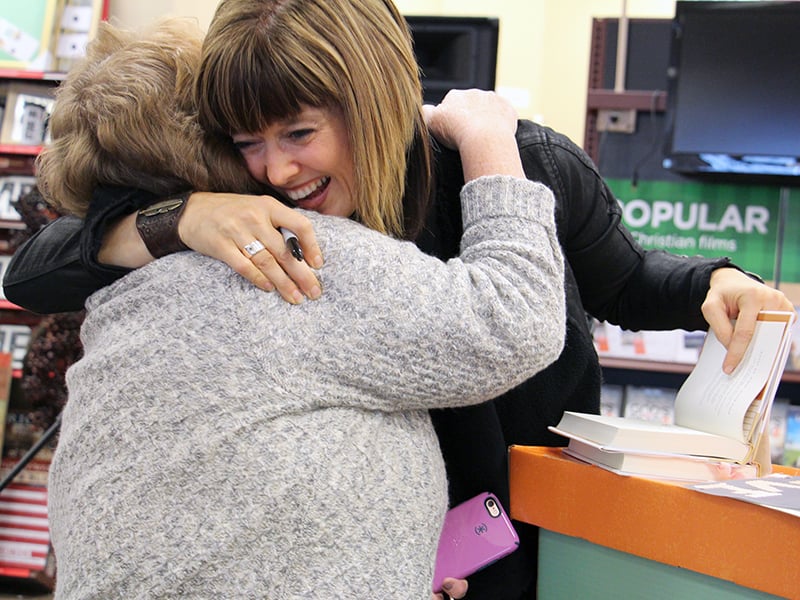 Author Ann Voskamp hugs a fan during a book signing on Oct. 28, 2016, at the Family Christian bookstore in Lombard, Ill. RNS photo by Emily McFarlan Miller

LOMBARD, Ill. (RNS) For best-selling Christian author Ann Voskamp, it’s not about writing books. It’s about living the stories God has given her.

Those include stories of heartache: Voskamp’s first book, “One Thousand Gifts: A Dare to Live Fully Right Where You Are,” opens as she witnesses her little sister’s death in an accident on her family’s farm. 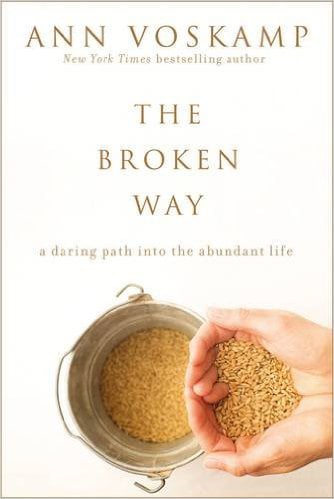 Her just-released book, “The Broken Way: A Daring Path Into the Abundant Life,” opens with her cutting her own wrists as a teenager.

But there are also stories of hope: Earlier this year, she and her husband, known to her readers as “The Farmer,” welcomed their seventh child, a baby girl they adopted from China who has an incurable heart defect. They also welcomed a Syrian refugee family they are sponsoring for a year in their town in rural Canada. After she shared on her blog the stories of women she met in Iraq who had fled from ISIS, her readers donated more than a half-million dollars in several days to an organization called Preemptive Love.

And many of those readers have accepted the dare of “One Thousand Gifts,” filling gratitude journals with lists of God’s gifts.

“What I did was I just lived out of ‘One Thousand Gifts,’ and then this just sort of organically unfolded from that, and then I wrote about the stories that happened out of the living,” Voskamp said of “The Broken Way.”

“It wasn’t an intentional, ‘Here, this is a good idea to market a book.’ It was, ‘This is what I’m living and wrestling out of after I had thought about what does it mean to live a grateful life, after I contemplated all of these gifts, counted all the ways God had loved me and relentlessly pursued me.’ What do you do with all those gifts?”

Voskamp talked to RNS before an event on her 10-city book tour at the Family Christian bookstore in Lombard, Ill. The interview has been edited for length and clarity.

“The Broken Way” seems to pick up where “One Thousand Gifts” left off. How did that book lead you here?

All the people that I’d met who read “One Thousand Gifts,” who had written out their own gratitude lists, they were giving thanks for hard things in broken places. So what is the answer to pain and suffering in the world? How do you live with your one broken heart, and what does it mean to live an abundant life?

You open the book with that question: “How in the world do you live with your one broken heart?” What did you learn?

I think lots of times we’re high-functioning people — “Well, I’m not really broken” — but underneath there are layers where there is brokenness, and someday we’re going to wake up to a deep loss that we didn’t expect, to turn a corner and you run into a diagnosis, so it is the question that we can’t afford not to answer. In “The Broken Way,” I discovered the most paradoxical, unexpected answer: You give it away.

You write very openly about the brokenness you’ve experienced. Why do you feel like it was important to share these stories?

I think the shortest distance between two hearts is brokenness. Stepping into a life that embodies the broken way really is to live a life of humility, a life of vulnerability and a life of generosity.

What are some practical examples of how you’ve lived out this broken way?

But then, there were all the big things we were called to. I went and sat in a shipping container in Iraq with women who had fled from ISIS, had family members who were killed by ISIS, had to decide which children they could grab in their hands and run with — and the children they had lost.

I realized after “One Thousand Gifts,” after I had counted all of these blessings, all of these gifts that we’d been given, that we’re all like Esther in the palace. We’ve all been given so much. Our position wasn’t for us. Our position is to be used for those outside the gate, those who are oppressed, those who are voiceless, those who are marginalized, and you’re called to risk everything you have for those outside the gate. I hope the book is calling people to dare to take the broken way, to be the Esther generation. You’re called to where you are for such a time as now. Where’s the brokenness in your own community (where) you can go ahead and give your one broken heart away?