(RNS) While Americans watch Hillary Clinton and Donald Trump fighting to the finish in a noisy and polarized campaign, Germans are quietly debating their own presidential election in far different terms.

Among the names put forward as candidates are two leading Protestant bishops — one of them a woman — and even a respected Muslim writer.

That’s not the only way the presidential election in Berlin next February will be different from the American contest.

German presidents are figureheads without real power, nominated by the parties in Parliament and indirectly elected by its members along with representatives of the state assemblies. They spend a lot of time meeting visiting dignitaries, addressing conferences and cutting ribbons.

But one job qualification that stands out is the idea that a president should be a moral leader willing and able to speak about the state of the nation’s soul. Pundits like to call this the “preacher in chief” aspect of the job. 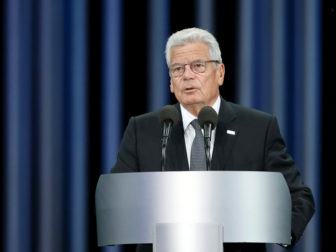 German President Joachim Gauck delivers a speech during a ceremony commemorating the victims of Babyn Yar (Babi Yar), one of the biggest single massacres of Jews during the Nazi Holocaust, in Kiev, Ukraine, on Sept. 29, 2016. Photo courtesy of Reuters/Valentyn Ogirenko *Editors: This photo may only be republished with RNS-GERMAN-PRESIDENT, originally transmitted on Nov. 7, 2016.

The current president, Joachim Gauck, fits the bill perfectly. As a Lutheran pastor in former East Germany, he learned how to deliver a rousing sermon.

Gauck was part of the dissident movement that forced open the Berlin Wall in 1989. He spent the next decade as commissioner for the archives of the former Stasi secret police, exposing the crimes of the fallen communist regime and examining the moral dilemmas many East Germans faced during the dictatorship.

Two of his most respected predecessors — Gustav Heinemann (1969-1974) and Richard von Weizsäcker (1984-1994) — were both gifted orators and active lay leaders in the Evangelical Church in Germany, the country’s main federation of Protestant churches, known as EKD.

So when Gauck announced in the summer he would not seek re-election, one of the first possible successors named was Wolfgang Huber, the former Protestant bishop of Berlin and chairman of the EKD from 2003 to 2009.

He declined the offer, the third time he has been asked since retiring from his church offices. 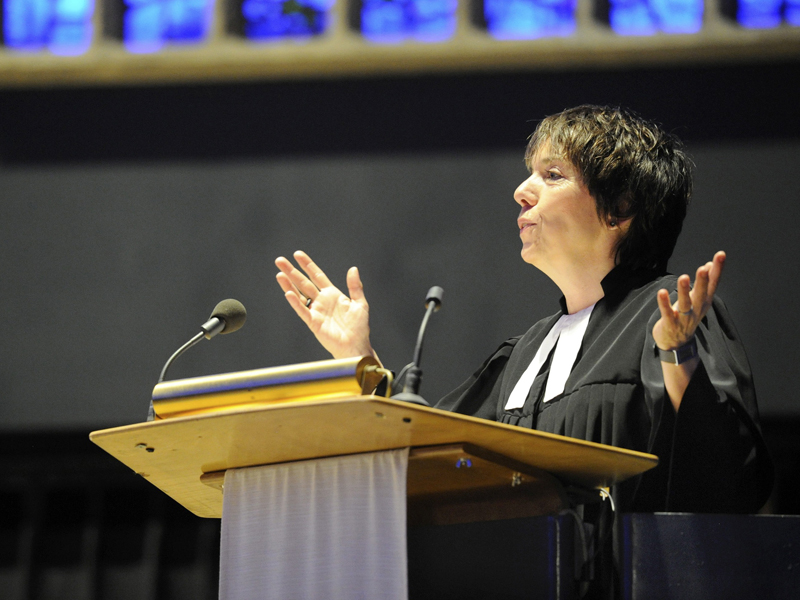 Lutheran theologian Margot Kaessmann speaks from the pulpit after being made the Evangelical Church in Germany’s ambassador to the 2017 Reformation Jubilee, during a service at the Kaiser Wilhelm Memorial Church in Berlin on April 27, 2012. Photo courtesy of Reuters/Hanno Gutmann/Evangelischer Pressedienst/Pool *Editors: This photo may only be republished with RNS-GERMAN-PRESIDENT, originally transmitted on Nov. 7, 2016.

The next to be asked was Margot Kässmann, the former Lutheran bishop of Hanover and Huber’s successor as head of the EKD. She was the first woman to lead Germany’s Protestants and would have been the country’s first woman president if elected.

“This is an honor … but I’m not available for this office,” she replied.

With eloquence an important part of the job description, it was no surprise that a leading writer many Germans got to know from hearing his speeches has also been suggested as a candidate. The surprise was that he is a Muslim. 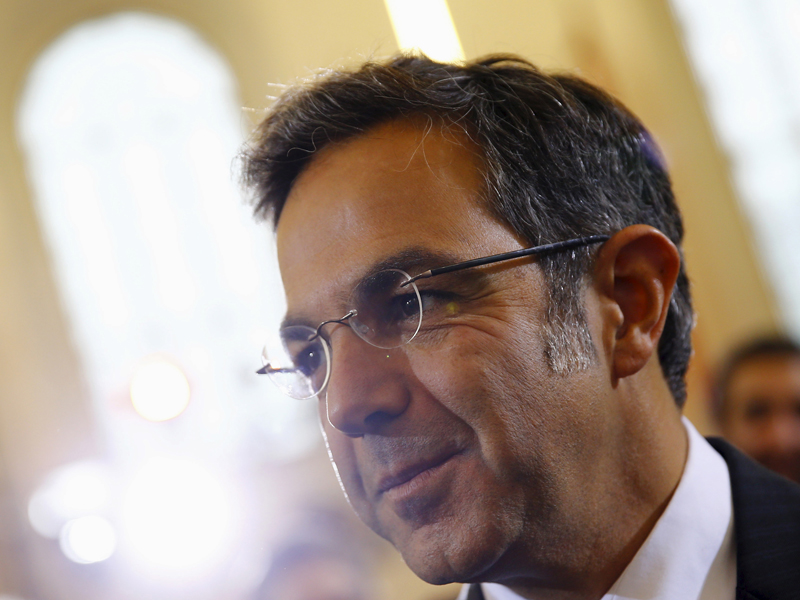 German writer Navid Kermani arrives for the ceremony to receive the Peace Prize of the German book trade (Friedenspreis des Deutschen Buchhandels) at the Church of St. Paul in Frankfurt, Germany, on Oct. 18, 2015. Photo courtesy of Reuters/Kai Pfaffenbach *Editors: This photo may only be republished with GERMANY-PRESIDENT, originally transmitted on Nov. 7, 2016.

Navid Kermani, 48, was born near Cologne to Iranian immigrant parents and has both German and Iranian citizenship. He is active in Christian-Muslim dialogue and has published 30 books including “God is Beautiful,” an aesthetic reading of the Quran, and “Incredulous Amazement” about Christianity as seen through its art.

With a doctorate in Islamic studies and long experience as a journalist, he lectures at universities (including a semester as visiting professor of German literature at Dartmouth), writes serious literary and political commentaries and occasionally goes reporting from hot spots in the Middle East.

His speaking skills were on full display in 2014 when the German Parliament asked him to deliver the formal address at its ceremony marking the 65th anniversary of the post-war constitution, and the following year when he accepted the annual Peace Prize awarded by German publishers.

He focused the Peace Prize speech on the fate of persecuted Christians in the Middle East. Instead of concluding that radical Muslims had declared war against the West, as many in the West did, he saw a civil war within Islam that was destroying the multiethnic and multireligious Middle East he had witnessed only a decade or two before.

In January 2015, after radical Islamists killed 17 people at the Charlie Hebdo magazine and Hyper Cacher Jewish supermarket in Paris, he addressed a rally for tolerance in his home city of Cologne.

“The terrorists want to drive a wedge between us, they want to make us decide whether we are Europeans or Arabs, Westerners or Easterners, believers or nonbelievers,” he told the crowd.

“The answer to terror has to be a different one, an enlightened one in the best sense of the word. Not less freedom, but more! Not more exclusion, but equality, especially now! And most of all — not bad blood, but brotherhood!”

“A thinker like this could be what Germany needs,” Paul Ingendaay, cultural critic of the daily Frankfurter Allgemeine Zeitung, wrote in a glowing portrait of Kermani. “He combines religious and political thinking like nobody else.”

Michael Brenner, professor for Jewish history and culture at Munich University, was just as enthusiastic. “Kermani is currently the most interesting voice that Germany can present to the world,” he wrote in the newspaper Die Welt.

When Gauck was asked last month if a Muslim could be Germany’s head of state, he said: “I wouldn’t rule that out in the future.” Leading politicians on the left agreed that religion should not be a factor.

“Of course it’s possible,” said Greens Party leader Cem Özdemir, who was born in Germany to Turkish parents and calls himself a “secular Muslim.”

Reactions among conservatives were mixed. Karl-Georg Wellmann, a deputy from Chancellor Angela Merkel’s Christian Democrats, said the time wasn’t ripe. “It would only deepen the split in our society,” he said.

The popular newspaper Bild even took the trouble to ask if a Muslim president could be sworn in saying “so help me Allah.” (The answer was “no.”)

Kermani, currently driving through the Middle East on a reporting trip for Der Spiegel newsweekly, has avoided talking about the idea. “I don’t want to answer unasked questions,” he told an interviewer last month.

Leading German politicians are now debating whom to nominate for president. The Social Democrats, who govern in coalition with Merkel’s Christian Democrats now but hope to head their own government after a general election later next year, have already chosen their colleague Franz-Walter Steinmeier, the current foreign minister, as their pick.

That, probably more than his religion, has all but erased Kermani’s chances, because he would logically attract more votes from the left than the right in the election.

But Brenner, the Munich professor, said the fact that he was even considered was a breakthrough.

“Whatever happens, we can already consider it a success that a person like Navid Kermani is being considered by so many people to be a serious candidate for the country’s highest office,” he wrote. 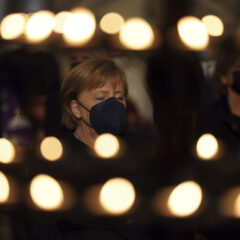 Opinion
If Rabbi Leo Baeck could survive Theresienstadt, we can survive COVID.