This sponsored advertising content was made possible by the American Association for the Advancement of Science.

At seminary, students tackle the big questions: How did the universe come into existence? Why are we here? What does it mean to be human?

Religious traditions may suggest answers, but to ponder those questions in a deep and relevant way, students need to understand current scientific thinking as well. However, most seminaries don’t have reliable access to scientific experts.

To help fill the gap, the American Association for the Advancement of Science (AAAS) is releasing an educational film series, “Science: The Wide Angle,” this month, presenting overviews of scientific topics through interviews with world-class scientists. The videos are free and will be available to all educational institutions as well as the general public at scienceforseminaries.org.

Topics covered include: biological evolution and the kinship of all life; human uniqueness in light of advances at the forefronts of science; insights for humanity from space exploration; the limitations and methodology of science; and charting the complexities of our brains at the frontiers of neuroscience.

AAAS’ Science for Seminaries project, launched in 2013, helped lay the groundwork for the series.

“The topics were chosen based on conversations with seminary leaders and leaders of various religious communities, who shared with us what kinds of science issues were most thought-provoking and interesting to the broader questions of theology, ethics and meaning,” said Dr. Jennifer Wiseman, director of the Dialogue on Science, Ethics and Religion (DoSER) at AAAS.

A 2013 survey, conducted by AAAS and sociologists at Rice University, also gauged interest in science among religious communities. Many people of faith, it revealed, turn to ministers or other faith leaders when they have scientific questions.

“Our surveys with seminary students show that the majority are interested in science and see it as relevant to their current studies and future ministries,” said David Buller, a former DoSER program associate who served as a producer on the series. “But a large portion have never encountered a discussion of science in a seminary course or a campus event.”

One reason is that seminary professors may not feel equipped to offer that scientific perspective, said Frederick Ware, associate professor of theology at Howard University School of Divinity.

“The videos present the science in a very responsible way, but with language and images that can be understood by persons who are not experts,” he said. “They help students in theological studies to see the connections between science and theology that are really worth exploring.”

Ware added that many students come to seminary with little science education and that learning about the current scientific thinking on a topic relating to theology may trigger hard questions – but also serve as a starting point for deeper thinking.

“Once they’re exposed to the science, the simple answers that students learned (before seminary) are not satisfactory,” Ware said. “And we really have to wrestle with these questions.”

Ware also appreciates the way that these short films might help engage students who are visual learners. The films feature an array of compelling images to illustrate and explain key points.

Compared with other media, “video does a great job of taking this intellectual, academic material and making it human by drawing an emotional connection to it,” said Nathan Clarke, the filmmaker for the project. “We wanted to make the videos as beautiful as possible. These scientists we interviewed are doing world-class science; it’s a way of honoring their work and honoring the work in the classrooms (where the films will be viewed).”

In conducting interviews for the films, Clarke was guided by AAAS and by “the big existential questions we all ask ourselves: Where did we come from? Where are we going?’” He was struck by the warmth and passion of the scientists interviewed for the series. 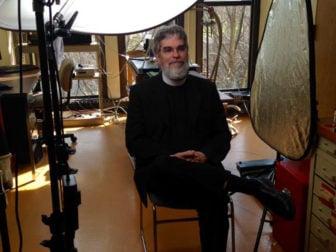 In a video on “The Awe & Wonder of Science,” Brother Guy Consolmagno of the Vatican Observatory talks about looking through a telescope: “It hit me: This is what makes us human — this ability to look at the sky with wonder.” Zoologist Dr. Jeff Hardin of the University of Wisconsin says, “When I look through a microscope, I can’t help but be struck by a sense of awe and wonder at what I’m looking at.”
“The scientists were all remarkable people,” Clarke said. “They have not just thought about the science they’re working on, but how to communicate it to a wider audience.”

Wiseman added that the aim is for seminary professors to show the films in classes and then “continue on with a deeper and richer discussion as to how the scientific advances covered in each video relate to the coursework at hand.” A course on the Bible or hermeneutics might be complemented with a basic understanding of modern cosmology; a course on pastoral care might be informed by an overview of neuroscience and the human mind.

The videos focus on the relevant science and don’t address any particular theological perspective. “The professor can decide where to take the conversation after the class views the film,” said Wiseman. “Our objective was to introduce the best, most current mainstream science on each topic, in a way that opens the door for reflection and deeper conversation.”

Buller added that science intersects with faith in areas where some might not expect. Students in classes on worship can benefit by learning the neuroscience of how people experience music, for example. “That hard scientific information can enrich the course content,” he said.

Funded by the John Templeton Foundation, with support from AAAS, the videos are of very high quality but relatively short, under 10 minutes.

Said Buller: “The idea is to give students a feel for the scientific process in a way that informs and piques their curiosity.”