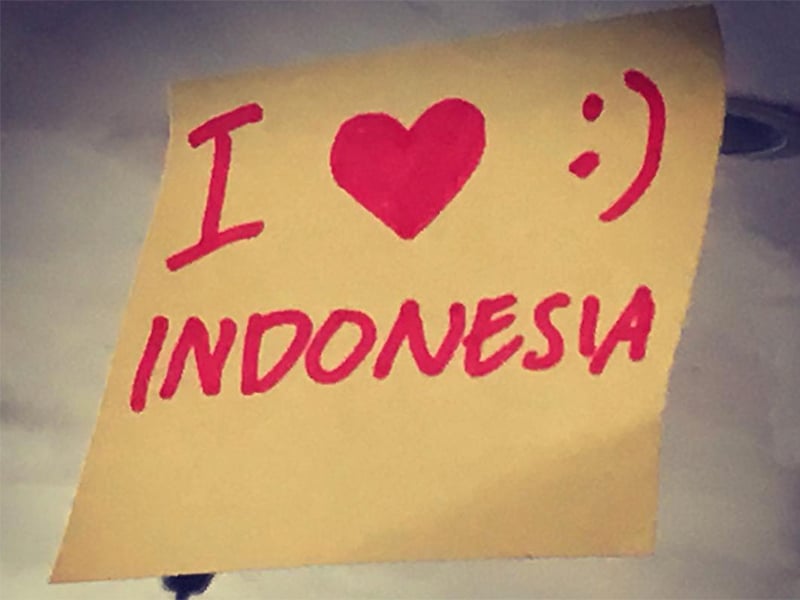 JAKARTA, Indonesia (RNS) Like most of her Muslim peers, Sarah Hajar Mahmudah, a 21-year-old international relations major at the State Islamic University, wears a tight scarf around her head.

She’s proud of her faith and equally proud of her country's long reputation for religious tolerance and coexistence. 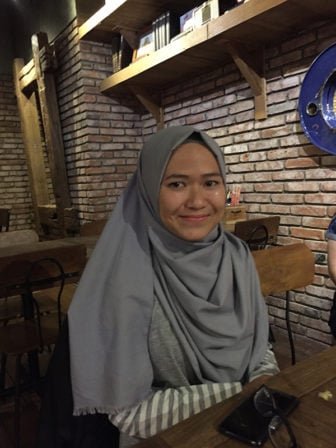 But over the past few years, she’s noticed a worrying trend.

“Social media is a problem for religious diversity in this country,” she said, pausing to talk at a cafe in a bustling Jakarta mall.

Earlier this month, at a mass protest in Jakarta, Muslim hard-liners pressed for the resignation of the capital's governor, a Christian they say insulted the Quran.

The furor over the alleged insult was sparked after a video circulated online in which the governor lightheartedly cited a verse in the Quran that warns against taking Christians and Jews as friends and said that he should be prosecuted and jailed under Indonesia’s blasphemy laws. He later apologized.

Indonesia, the world’s largest Muslim-majority nation, is one of the most voracious users of social media.

An estimated 76 million Indonesians regularly log on to Facebook, making the Asian archipelago nation the world’s fourth-largest user (after India, the U.S. and Brazil). The country is the fifth-largest user of Twitter (after the U.S., Brazil, Japan and the U.K.)

Both Google and Facebook have recently come under criticism for allowing fake news on their sites, which some have suggested may have influenced the U.S. presidential elections. The internet giants both responded by saying they will not tolerate misinformation.

While most agree that tech companies must do more to filter out hoaxes, an experiment soon to be launched in Indonesia may be one small corrective to the wider problem of false narratives and misleading information on the internet.

It started two years ago when Facebook founder Mark Zuckerberg flew to Indonesia to meet with President Joko Widodo. The two discussed how the tech giant could help support Indonesian microbusinesses and increase internet access in rural areas.

Less noted was another item on the agenda: How could Facebook help the world’s third-largest democracy bridge its diversity challenges?

Indonesia has more than 6,000 inhabited islands, dozens of ethnic groups and a multitude of religions.

"Unity in Diversity" (Bhinneka Tunggal Ika) was proclaimed the national motto when Indonesia declared independence from Dutch colonial rule at the end of World War II.

But peaceful coexistence is not always the norm, and as the country struggles to live up to its motto, it’s finding that social media is a double-edged sword.

Much has been written about the ways the self-styled Islamic State group has manipulated social media to recruit foreign fighters to Iraq and Syria. But social media is also having a negative effect on social cohesion in other regions of the world, where it is often viewed as a tool for inflaming hatred, reinforcing biases and spreading misinformation.

Which is why Facebook asked Affinis Labs, a Falls Church, Va.-based group that specializes in running social impact hackathons, to organize an event in Jakarta to encourage religious and cultural diversity.

In June, at two co-working office spaces in Jakarta, 25 Indonesians from across the country were invited to come together, including Mahmudah, who applied at the suggestion of one of her professors.

“The idea was to generate ideas around social issues,” said Tony Pribadi, a startup entrepreneur who splits his time between Indonesia and the U.S. “First they talked about the issues. Then they picked one topic to work on.” 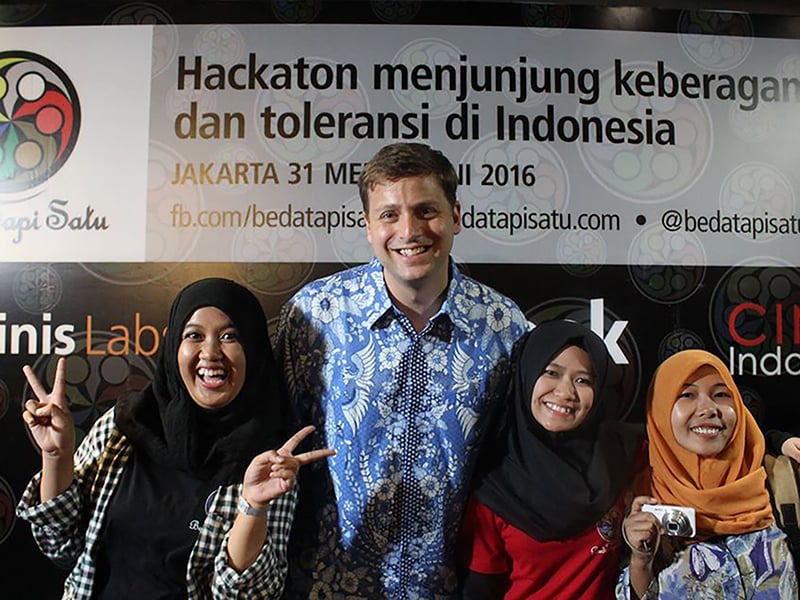 Over the past decade, hackathons have proved popular as a way to bring programming geeks together to work on a unique solution to a technological problem.

The events are addictively high-energy, as teams work around the clock and under tight deadlines -- events typically last 48 hours -- to come up with a programming prototype that they can demo for prizes.

But Affinis Labs tweaked the hackathon model to focus on finding social solutions to problems such as hate speech and violent extremism.

Founded nearly two years ago by Obama administration consultants on American Muslim engagement Quintan Wiktorowicz and Shahed Amanullah, the organization has acquired a reputation for using the hackathon model to find solutions to counter radicalization and promote positive narratives and social entrepreneurship.

“Facebook came to us and said: Listen, Indonesia is a huge market for Facebook. Can you do something to promote diversity?” said Wajahat Ali, creative director for Affinis Labs and a host/contributor at The Huffington Post. “We wanted to come up with innovative, impactful and scalable solutions that can amplify Indonesian values of co-existence, diversity and pluralism.”

Over the course of the three-day event, dubbed “Beda Tapi Satu” or “Different But One,” participants were split up into five teams and asked to home in on a social problem that needed fixing and propose a solution.

Mahmudah, the international relations student, teamed up with Reggy Hasibuan, a 47-year-old stand-up comedian. The two, along with three others, hammered out the problem: Social media is fueling a cottage industry of online hoaxes and fake news that spreads misinformation and foments hatred among Indonesian faith traditions.

One online hoax alleged non-Muslims were responsible for torching a mosque in Papua, Indonesia’s easternmost province; another falsely alleged an Australian company was crossbreeding sheep with pigs so as to defile Indonesia’s halal meat supply (Muslims do not eat pork).

Hoaxes don't always involve Muslims. One fake news meme alleged a statue of Jesus in India was miraculously weeping tears when in fact water from a stopped-up bathroom was dripping onto the sculpture.

One way to bust these hoaxes, the team decided, was to counter them with a series of quick, punchy and -- most important -- funny online videos.

“Humor,” said Mahmudah, can enlighten people about the truth. “No matter who you are, you can appreciate a good joke.”

The videos, the team proposed, would live on a special website dubbed Asiknaja.com, or “Lighten Up” in Bahasa, the official language of Indonesia.

The team’s solution won first place in the hackathon. Mahmudah and Hasibuan have since completed 10 short video clips that aim to debunk online rumors such as “NASA has changed the signs of the zodiac” and “Mark Zuckerberg has converted to Islam.”

The three- to five-minute video clips are now being edited. Mahmudah and Hasibuan have plans for another 10 videos. They will post them to a new website, YouTube and various social media outlets.

In Indonesia, “the understanding of other religions is very lacking,” said Hasibuan, a nonpracticing Roman Catholic who grew up surrounded by Muslims.

“You’re taught at an early age that your religion is the best. This justifies a lot of wrongs that happen afterward.”

One wrong is radicalization, which both Mahmudah and Hasibuan are committed to fighting.

While the Indonesian Constitution provides for freedom of religion, international human rights organizations report persistent attacks and intimidation against religious minorities and atheists.

It’s not only non-Muslim faiths that face hostility. Indonesia’s Ahmadiyya community is increasingly targeted, as are Shiite Muslims.

Mahmudah points out that Indonesia was once a Hindu society and that Islam spread across Southeast Asia through commerce rather than war or military conquest.

She wants the country to be known for a friendly and tolerant version of Islam, and she believes challenging misinformation is critical to that effort.

Humor, she added, may help.

(This story was made possible by an East-West Center fellowship)

Related Posts
By Yonat Shimron
Alabama Southern Baptist pastor resigns after speaking at party for a KKK leader
By Daniel Darling
If you've got Jesus in your profile, don't be nasty on your timeline
By Thomas Reese
COVID-19 crisis provides opportunities and grace
By Aysha Khan
Facebook, Instagram unblock #Sikh hashtag amid 1984 massacre remembrance
By Yonat Shimron
A 24-hour online vigil will name some of the people who have died of COVID-19