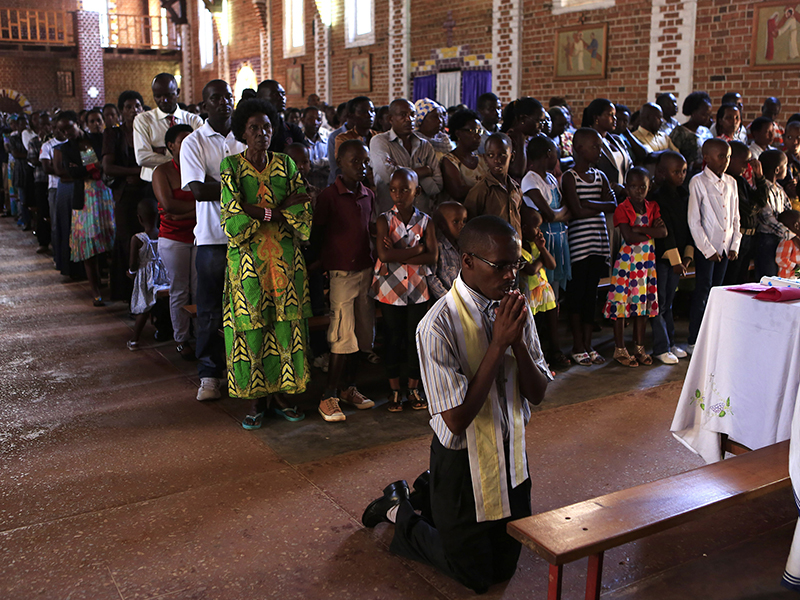 A worshipper kneels down during a service at the Saint-Famille Catholic Church a day ahead of the commemoration of the 20th anniversary of the genocide in the Rwandan capital, Kigali, on April 6, 2014. An estimated 800,000 people were killed in 100 days during the genocide. Photo courtesy of Reuters/Noor Khamis *Editors: This photo may only be republished with RNS-KIGALI-BISHOPS, originally transmitted on Nov. 21, 2016.
November 21, 2016
Fredrick Nzwili

(RNS) Roman Catholic bishops in Rwanda have issued an apology for the role played by individual clergy and church members in the 1994 genocide in which nearly 1 million ethnic Tutsis and Hutus were killed.

On Sunday (Nov. 20), the apology was read aloud in all Catholic churches in the local Kinyarwanda dialect. It came at the end of Pope Francis’ Jubilee Year of Mercy.

“We apologize for some church members and clergy-people dedicated to serving God and Christians who played a role in the genocide,” the statement signed by the country’s nine bishops said.

In the past, the church has been accused of having played a role in the killings. It is also accused of having helped create the structures after independence from France that finally resulted in the genocide.

But bishops said the denomination did not send any priest or church member to kill, although some of its members planned, aided and executed the genocide.

Bishop Philippe Rukamba, chairman of the Episcopal Conference of Rwanda, was quoted saying the bishops agreed that the church played a role in the genocide.

In the last two decades, human rights activists and survivors had put pressure on the church to apologize. They argued that people fled to the churches hoping to be saved, only to be killed there by militiamen.

The apology is being seen as a crucial development that joins the government and church in the efforts to heal the tiny East African country, which continues to struggle with deep divisions 22 years after the genocide.

“The Catholic Church in Rwanda has taken seriously the just-concluded Year of Mercy -- looked into the past and done what is needed: repented and asked for forgiveness,” said the Rev. Don Bosco Onyalla, a priest of South Sudan and a lecturer at Tangaza University College in Nairobi, Kenya.

Jean-Damascene Bizimana, the head of the National Commission for the Fight against Genocide, welcomed the apology and called on priests and nuns who committed the killing to come out and apologize.

(Fredrick Nzwili is an RNS correspondent in Nairobi, Kenya)